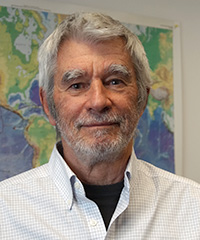 Peter Molnar is a professor of geological sciences at the University of Colorado Boulder; his research examines the processes in the Earth’s crust and mantle, and their influence on climate. Peter is the recipient of the 2014 Crafoord Prize in Geosciences for his groundbreaking contributions to the understanding of global plate tectonics.

Peter returned to the Lamont campus in April 2014 to give a couple of talks on his research and meet with friends and colleagues.
What is the focus of your research?
My research is aimed at two large questions. One is how mountain ranges are made and how large-scale deformation takes place in the crust and upper-most mantle. And the other question that motivates me these days is how any of this affects climate on a geologic time scale. I don’t do much with modern climate. These subjects are somewhat independent. I started as a seismologist, then I got interested in how continents deform, and about 25 years ago or so I got interested in climate.
I realized I needed to understand climate better, and it ended up that, among a few people, [Lamont scientist] Maureen Raymo was a big help. She supported me, she guided me, and she was my consultant on a lot of this. Once I got interested in climate I started having fun. So off I went. I started my life as a scientist focused on solid Earth and had no intention at all of going into oceanography or atmospheric sciences or paleoclimate. I knew nothing about them and was totally untrained. But suddenly there were all these wonderful questions, and the paleoclimate community welcomed me.
What are some of the more satisfying or rewarding parts of what you do?
Learning. Virtually everything I’ve done that I’m proud of has been done with other people. And in all cases those other people brought an essential element to the study. So, I learned from them. These might be people trained as seismologists, as I was, but are better at some things that I am, all the way to people who are climate dynamicists, who are completely differently trained, and I learn from them as well. Whenever I’m learning I’m in heaven, and I’m having so much fun because I’m learning all the time.
Who were your mentors at Lamont? How did they influence your work?
I had three advisors by some definition of the word, although I had only one official advisor, who was Jack Oliver. I defended my thesis in December of 1970, and it consisted of three papers, all of which were published in 1969--one in May and then two in September. Each of those three papers was written with a different person. The first was written with Jack Oliver, the second with Lynn Sykes, and the third with Bryan Isacks.
I learned quite different things from each of them, and I attribute three aspects of my education to each of them. Jack Oliver could not look at you in any confrontational situation, an exam or a thesis defense, for example, without asking, “Okay, now what’s the most important problem?” My father had brought me up with this idea of always asking what was important, and Jack Oliver reinforced this idea. Lynn Sykes always said, “How can we test this? Here’s an idea, how do I test it?” Sometimes progress doesn’t come by testing a hypothesis. Sometimes it comes by just bumbling and stumbling and making a discovery, but thinking about tests focuses us on finding solutions. Bryan Isacks was meticulous. If I couldn’t meet his standards in terms of care and attention to detail, both with data and with intellectual rigor, that was it.
The combination, of these three giants in the field of seismology, and the fact that I had the opportunity to work individually with them was a lucky opportunity; few people have benefited in the same way I did.
Do you have any stories you’d like to share about your time at Lamont?
Life as a student at Lamont was fantastic. I didn’t want to leave. The reason I quit was that the graduate students had to change the seismograms on the seismographs on the weekends. There was someone who did this during the week, but on the weekend, the students had this job and would all be cycled through. I hated this job. I lived in New York, and I’d have to come out to campus on the weekend and do this, and of course I did a terrible job because I couldn’t concentrate on this boring work.
So, I went to Lynn Sykes and told him I wanted to finish, that I wanted to defend my thesis. He said it was a good idea. Then I told him I was sick of changing seismograms, and he said that’s a stupid reason for wanting to graduate. Anyhow, I defended a thesis that had been long published and finished a year earlier.
Anything else you’d like to share about your time at Lamont?
Would I do it all over again? Yes, I came to the right place, and I was so lucky to come to Lamont with the people who were here, and with what was going on in seismology at Lamont at the time. Being at Lamont was paradise— you couldn’t beat it.
‹ Alumni Profile: Kevin Wheeler, USAID, PhD '07 up The Alumni Board: Greetings from the President ›