The Advisory Board is made up of community leaders, loyal friends and Lamont-Doherty alumni, all of whom believe deeply in our mission-to generate fundamental knowledge about the origin, evolution an d future of the natural world.

Members of the Advisory Board build awareness of and support for the Observatory through various projects, such as the production of "Science to Sustain the Planet." Released in early 2008, this DVD, narrated by Tom Brokaw, highlights the achievements of Lamont-Doherty over the last 60 years.  Advisory Board members also contribute to an Innovation Fund, awarded on a compeitive basis each year to Observatory researchers in need of seed funding for initiatives with potential long-term impact at the Observatory. 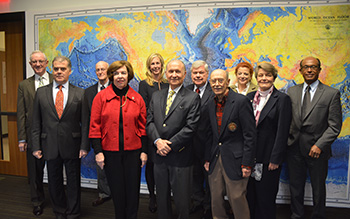