The Lamont-Doherty Core Repository curates and archives a diverse collection of deep sea cores, coral cores, marine dredge samples, terrestrial cores from lakes and wetlands, as well as a number of special collections such as the CLIMAP samples, Prof. Jim Hayes' radiolarian collection, and a collection of cores that have been vacuum-sealed since they were first collected.

You can search the LDCR holdings using GeoMapApp or with NCEI (formerly NGDC).

You can read more about specific collections by scrolling down or following links to left.

Sediment cores from every major ocean and sea are archived in the Core Repository. The collection contains approximately 72,000 meters of core composed of 9,700 piston cores; 7,100 trigger weight cores; and 3,000 other cores such as box, kasten, and large diameter gravity cores. Please note that all core samples from cruises prior to 1968 (VEMA 1-25; CONRAD 1-12) were temporarily stored in galvanized tubes and thus all of this material is seriously contaminated for heavy-metal geochemical studies. Additional contamination may be present for cruises through VEMA 32 and CONRAD 17 from storage in galvanized trays. Also note that all VEMA cores and all CONRAD cores taken prior to cruise 24 are stored dry at room temperature. All cores taken since 1985 are stored wet in D-tubes at 4.5°C (40°F).

Despite the illustrious and productive history of the Lamont-Doherty Core Repository, the core collection is so vast that the majority of its cores still remain largely unexamined. Additionally, many of the best known, most requested cores are now nearly depleted. Amazingly, only 4% of the core collection has adequate carbonate and/or oxygen isotopic stratigraphic data to define glacial-interglacial stratigraphic cycles, although nearly all have a "basal age estimate" based on biostratigraphic analyses of the deepest core level.

The LDCR has recently launched a new initiative aimed at generating preliminary stratigraphic data on selected subsets of cores. Our goal is to identify promising cores in geographic arrays that could be used to track past variations in surface and deep ocean properties---essentially “paleo-GEOSEC” core transects. The expectation is that by making these surveys available to the community, these cores will be much more likely to be utilized, indeed discovered, by the community.

Many years ago Bill Ruddiman and John Farrell compiled CaCO 3 stratigraphies for about 350 sediment cores from the Atlantic, Indian, and Pacific basins (Ruddiman and Farrell, 1992). These data were generated principally as a result of CLIMAP and SPECMAP related research and are accessible from numerous online data servers including NOAA-NCEI and PANGEA.

More recently, we have measured %CaCO3  in a suite of cores from the Atlantic and the Pacific with the goal of providing a N-S transect with basic chronostratigraphic control for the latest Pleistocene (typically last 200-300 ka). Approximately 100 cores between 45°N and 35°S (out of several thousand) were deemed suitable based on criteria such as proximity to the ridge axis, water depth near or above the modern lysocline (4200m), Pleistocene or younger basal age datums, and undisturbed, long core recovery. We have run 132 cores, some of which are sufficiently promising for possible generation of oxygen isotope stratigraphies (by future researchers). The list of samples run for %CaCO3 can be found here. Preliminary coretop G. ruber (white) oxygen isotopic and Mg/Ca data from this transect track mean annual SST and salinity gradients faithfully (Arbuszewski et al., 2010).

We are committed to identifying new, promising deep-sea sediment cores in the Lamont collection that can be used by the scientific community. Results will continue to be published on this website and will be accessible through the GeoMap App database.

The repository contains many sediment cores ranging up to 14 meters in length from lakes, bogs, salt marshes, freshwater marshes, rivers and peatlands. Collections are from the northeastern US, southeastern US, Alaska, and Chile as well as several sites in Siberia and on Easter Island. Currently the meta-data is being tabulated and will eventually be searchable with a user interface; in the meantime, please contact the Curator for information on this collection.

Data from these cores have been published in the following papers (a partial list):

We are expanding the types of cores housed at the LDCR to include coral samples and cores. Currently no national coral archiving system exists and coral cores are stored wherever the principle investigators (PIs) are located. Once PIs are finished with core analyses we can provide a place to properly archive these valuable coral samples for potential future analysis, similar to how sediment cores collected with federal funds are stored in accessible facilities such as ours. This new archive includes whole and split coral cores, core slabs, as well as metadata tags for species ID, collection location and water depth, X-ray negative and positive (if available) and associated digital geochemical data. Prof. Brad Linsley has recently brought his extensive collection of multi-century length coral cores from Rarotonga, Fiji, Tonga, Fanning Atoll, and Clipperton Atoll (total of 28 cores) to Lamont and will help oversee the development of coral archiving at Lamont. His unique collection promises to be an important archive for studying Pacific-wide climate variability at interannual and interdecadal timescales, and for reconstructing secular trends in oceanographic conditions over the last 400 years.

We hold 4,000 dredge and grab samples, including a large collection of manganese nodules, many of which were recovered by submersibles. Our dredge collection spans the globe and we have samples from a variety of tectonic settings. Some of these samples have few or no known equivalents on land.

Below is a map of our entire dredge collection. Circled areas have sample suites of particular regional significance and detailed information of dredges from within the outlined areas can be found at links below. (Photographs available upon request.) 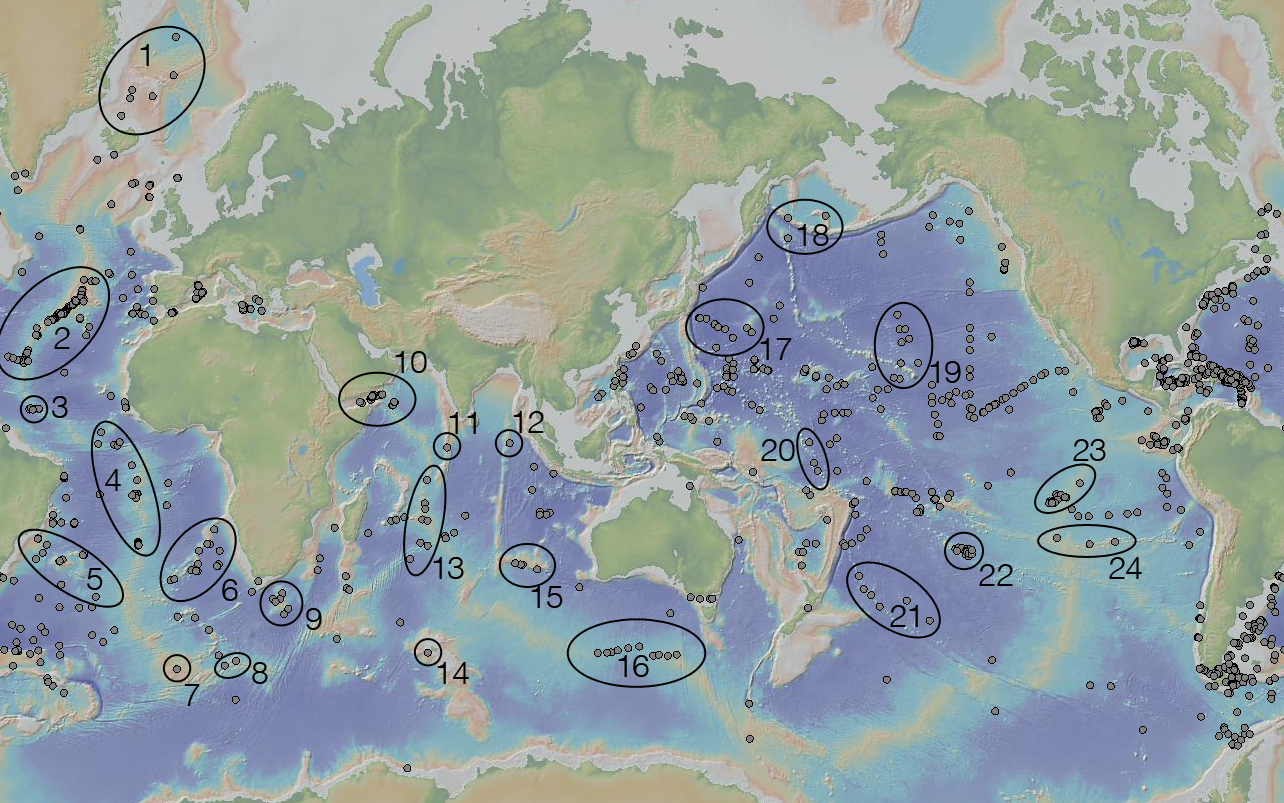 Prof. James D. Hays radiolaria collection: The James D. Hays Radiolaria Slide Collection consists of tens of thousands of slides from hundreds of mostly Lamont-Doherty Earth Observatory deep-sea sediment cores. The slides, prepared between the late 1960’s and 2012, are primarily from the Antarctic south of 40° latitude, the North Pacific north of 40°, and the equatorial Pacific between 10°N and 10°S. The slides are standard microscope slides with 22x50mm cover slips using Canada Balsam as a mounting medium. Slides prepared prior to 1970 are strewn slides while most of those prepared after that date are randomly settled (Moore, 1973). In all cases the radiolarians were separated from the sediment using a 63 micron screen.

Special Note: the James D. Hays radiolaria collection and the Lloyd H. Burckle diatom collection have been transferred to the Museum fur Naturkunde in Berlin, Germany. For access to these collections, please contact Dr. David Lazarus.

Vacuum-sealed cores : Between 1949 and 1959 almost 200 cores from the Arctic, Mediterranean, Gulf of Mexico, Caribbean, and across the North Atlantic, had quarter rounds vacuum-sealed in glass tubes when they were fresh. Most of these quarter rounds are still wet. The Arctic cores in this collection were taken on ice-islands; drifting ice packs solid enough and large enough for a small coring station. Those from the Mediterranean Sea were used for ostracode, foraminifera and pteropod stratigraphies as well as volcanic ash and paleomagnetism studies. The rest of these cores have been used to study topics as varied as coccoliths, clay mineralogy, volcanic ash, the calcite compensation depth, radiolaria, the Puerto-Rican Trench, the Mid-Ocean Ridge, fracture zones, ocean currents, glacial cycles and seismic refraction and reflection.

A brief list of papers in which these cores are discussed:

Residuals of cores and dredges from various ships and platforms