This time of year there’s always a buzz about whether an El Niño Southern Oscillation (ENSO) event is developing, and where it might affect the climate. ENSO refers to a coupling between equatorial Pacific Ocean sea surface temperatures and atmospheric conditions. Both El Niño and La Niña, the two phases of ENSO, influence rainfall, floods, and droughts across much of the world. But why should we care what causes a drought?

A drought by any other name would be as dry

ENSO doesn’t necessarily force more natural disasters or stronger events, but it does change the pattern of events. Your run-of-the-mill drought might damage a crop in one major breadbasket, but that drought is unlikely to be connected to other major crop-producing regions in the world. In fact, our modern food production system is based on the notion that crop failures in one region will be compensated by good harvests elsewhere. And as long as weather is random, there will always be some of each. Hooray pooled risk!

But ENSO is different. It has a global influence that can affect crops in the United States, Southeast South America, Southeastern Africa, Australia, India and China. So in any given ENSO year, we risk multiple ENSO-forced breadbasket failures. That’s a serious concern for global food security. 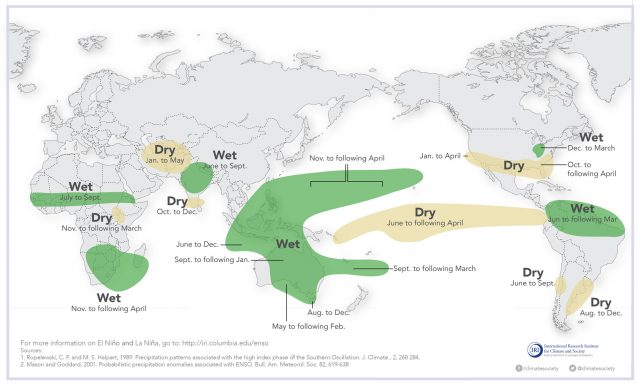 Grain yields from this last year are an excellent example of how ENSO events can force multiple crop failures in major producing regions. In Kansas, for example, winter wheat yields are forecast to be a whopping 22 percent lower than last year, according to the USDA. On top of this, hot and dry conditions in South America led to a failure of the Safrinha maize crop in Brazil and failures of both maize and soy crops in Argentina. These crop failures took some governments by surprise, but they are all likely attributable, at least in part, to ENSO. It shouldn’t have been surprising. Nearly two years ago, my colleagues and I wrote a series of research papers about how ENSO teleconnections force these exact yield impacts in the Americas. 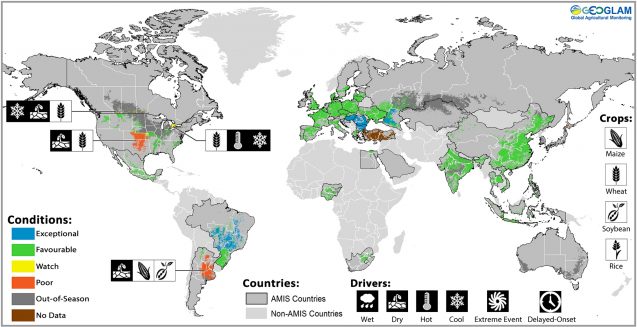 And this year is no anomaly. A 2014 study estimated that during ENSO events, global crop yields can be 2-4 percent lower than expected. To give that number some context, during the 2008 food security crisis, global wheat yields were down about 5 percent compared to the previous year. Granted, no food security crisis is caused by poor production alone. But when combined with structural, economic, and political factors such as those at play leading up to 2008, a global decline in production of 2-4 percent is nothing to scoff at.

The upshot of ENSO

It isn’t all doom and gloom. In many ways, it’s preferable that a drought be caused by ENSO as opposed to random weather. El Niño and La Niña events are predictable up to a year in advance, meaning that we can plan for, and adapt to, poor growing conditions using ENSO forecasts in a way that two-week weather forecasts would never allow. In fact, organizations like Columbia’s International Research Institute for Climate and Society (IRI) have been developing ENSO forecasts to improve food security for decades now. The combination of cutting-edge ENSO research at Columbia’s Lamont-Doherty Earth Observatory and the implementation of climate services next door at the IRI provides a direct path for research to move from the pages of an academic journal to the fields of a farmer. That’s a good thing for food security.

Weston Anderson is a graduate student at Columbia’s Lamont-Doherty Earth Observatory. He studies hydroclimate dynamics and their implications for agriculture and food security.