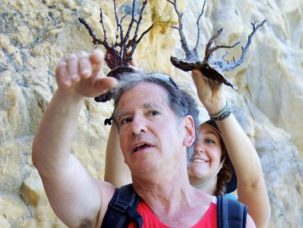 Three scientists from Columbia’s Lamont-Doherty Earth Observatory have received prestigious 2018 Section awards from the American Geophysical Union (AGU). The organization, the world’s largest earth and space science society, made the announcements Monday. Lamont Associate Director of Geochemistry and Higgins Professor of Earth and Environmental Sciences Steven Goldstein is to receive the Norman L. Bowen Award of the Volcanology, Geochemistry and Petrology Section; the Paleoceanography and Paleoclimatology Section will give its Willi Dansgaard Award to Associate Professor Bärbel Hönisch and their Harry Elderfield Outstanding Paper Award to graduate student Kassandra Costa.

“It is heartening that the American Geophysical Union has honored these three Lamont scientists this year for their important contributions,” said Lamont Director Sean Solomon. “We very much look forward to seeing our colleagues receive their awards at the AGU Fall Meeting.”

The Dansgaard Award is given in recognition of innovative interdisciplinary work, mentoring, and societal impact, and specifically recognizes significant contributions in the Paleoceanography and Paleoclimatology section within 8-20 years post-degree. Dansgaard honorees show exceptional promise of continued leadership in paleoceanography or paleoclimatology. Hönisch studies ocean acidification and particularly how marine ecosystems, productivity, and genetic diversity will respond to climate change.

“It is such a great honor to know my colleagues are thinking highly of my work, and I am humbled to follow the fantastic scientists that received the Dansgaard Award before me, including our own Jerry McManus,” said Hönisch. “Colleagues have often acknowledged the professional services I do, and it is such a joy to receive recognition for my scientific contributions as well. This is a first one for me.”

The AGU is presenting the Elderfield Award for the first time this year. AGU officials say the honor is intended to promote excellence in the next generation of paleoceanographers and paleoclimatologists. Costa investigates the interface between climate, biogeochemistry, and the environment.

“This award comes just as I am finishing my Ph.D. and preparing to enter the next stage of my scientific career,” said Costa. “I can only hope to live up to Harry Elderfield’s exemplar, and his accomplishments in ocean chemistry, hydrothermal activity, and paleoceanography are an inspiration to explore and cultivate multidisciplinary research.”

The selection of the three Lamont scientists for these prestigious awards and honors “recognizes their sustained and unique contributions to enlightening our understanding of the Earth and its atmosphere and oceans, and of the solar system and exoplanets,” said AGU president-elect Robin Bell. Bell serves as Palisades Geophysical Institute Lamont Research Professor.

The awards will be presented at the AGU Fall meeting, which will be held December 10-14, 2018, in Washington, D.C.