Analyzing Winter Storm Risk and Resilience in a Changing Climate

The northeastern United States, marked by dense population centers and extensive infrastructure, is at particular risk for both physical and economic effects of climate hazards, including sea level rise and extreme weather events. While we tend to think of extreme weather largely in terms of tropical cyclones like Superstorm Sandy, the Northeast is also prone to extratropical cyclones – winter storms – the effects of which are understudied despite costing millions of dollars in damages every year and having the potential for increased risks as the climate changes. “The costs of a winter storm are often less severe than those of a hurricane, but they occur more frequently and over time their compounding impacts can result in high damages because you’ll see several events through the season,” explains Cari Shimkus, program manager at the Earth Institute’s Undergraduate Program in Sustainable Development and lead author of a new paper examining hazards and damages resulting from winter storms in New York, New Jersey and Connecticut.

The paper, published in the Annals of the New York Academy of Science, analyzes storms from 2001 – 2014, evaluating storm intensity based on four metrics – wind, precipitation, storm tide and snow depth – to categorize storms by hazard type and devise a list of the 20 strongest storms during that period. Correlating those with available data on financial losses caused by impacts such as flooding, wind damage and snow inundation, the authors aim to inform how communities can better assess their risks, prepare for winter storms and enhance their resiliency as the effects of climate change exacerbate hazards.

“My expectation was that anything that caused down power lines would be expensive,” says co-author James Booth, assistant professor of earth and atmospheric science at the City College of New York. “So I was surprised by the low property damage associated with wind storms in isolation. However, the high costs associated with the multi-hazard events often included wind storms, and so the lesson I learned was: when these cold season storms are dangerous and expensive, they usually include multiple hazard types.”

The study also found that losses from inland flooding were by far the most costly, even more so than those from coastal flooding; however, Long Island’s Suffolk County was a significant outlier with $33M in coastal flood losses, compared to less than $4M in other counties. While cautioning that in the absence of case studies, they are unable to determine to what extent infrastructure issues, property values and geology contribute to these losses, the authors write that “Suffolk County’s stark damage value necessitates adaptive action by local communities since the sea level and thus coastal flood threats are rising.” 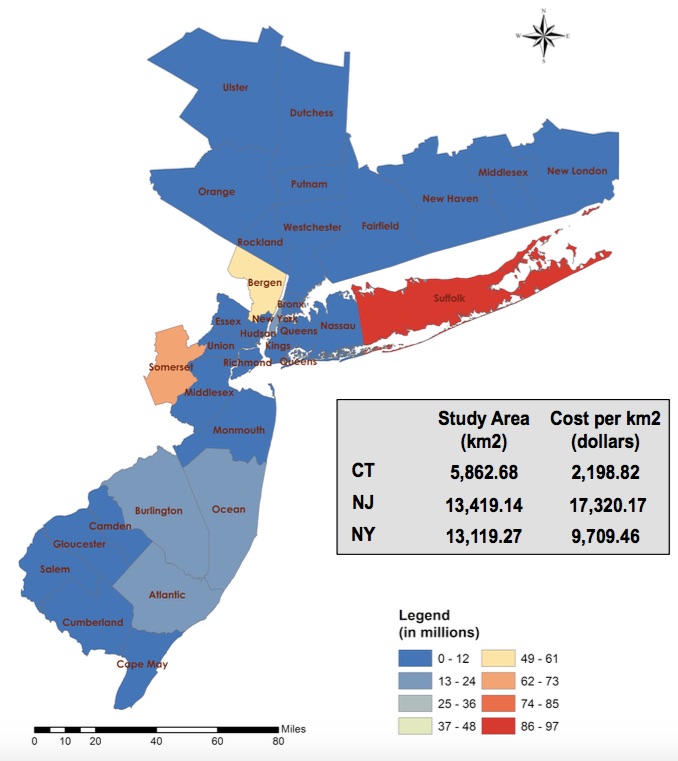 In Suffolk County and beyond, the authors hope that this study will inspire future analyses of winter storm hazards and losses, which will help policymakers make decisions on storm response, infrastructure planning and resiliency, particularly as damages from future winter storms are exacerbated by rising seas and other effects of climate change. “Due to the increase in moisture content of the atmosphere as a consequence of warming, we expect the precipitation intensity to increase and thus more extreme flooding due to storm precipitation,” explains co-author Mingfang Ting, Lamont research professor and associate director of the MA Program in Climate and Society. “In combination with sea level rise, intense flooding can become a more frequent hazard for the coastal community. Our results show that flooding damage is one of the most important type of losses in the New York tristate area already, and this may increase in the future.”

Booth agrees. “For storm surge, it seems likely that we will see a change for the worse in the future, meaning more coastal flooding,” he says. “We do not yet have a robust understanding of how the storms will change in the future, and it is possible that they may not change significantly in the next 80 years. But if sea level continues to rise as it is projected to do, even with no change in storm behavior we expect an increase in coastal flooding.”