Ancient humans migrated out of Africa to escape a drying climate, says a new study–a finding that contradicts previous suggestions that ancient people were able to leave because a then-wet climate allowed them to cross the generally arid Horn of Africa and Middle East. The study appears in the journal Geology.

The new study examines regional climate some 70,000 to 55,000 years ago, when ancient people are thought to have migrated out of the continent. While humans may have left Africa earlier, genetic research indicates that the main migration into Eurasia that eventually peopled the rest of the world probably occurred around then.

“It has long been proposed that the out-of-Africa migration was facilitated by wet periods that created green corridors to Eurasia–in other words, the climate pulled people out,” said study coauthor Peter deMenocal, a climatologist at Columbia University’s Lamont-Doherty Earth Observatory. “We may have to revise this model to one where people were pushed out, due to unfavorable conditions.” DeMenocal has long been exploring how climate may have affected early human development and dispersal.

The researchers were able to trace the climate of the Horn of Africa back 200,000 years by analyzing a core of ocean sediment taken in the western end of the Gulf of Aden, off present-day Somalia. The study’s lead author, Jessica Tierney of the University of Arizona, said the core showed that in addition to drying around the time of the human migration, the region also became cooler. “Our data say the migration comes after a big environmental change. Perhaps people left because the environment was deteriorating,” she said. 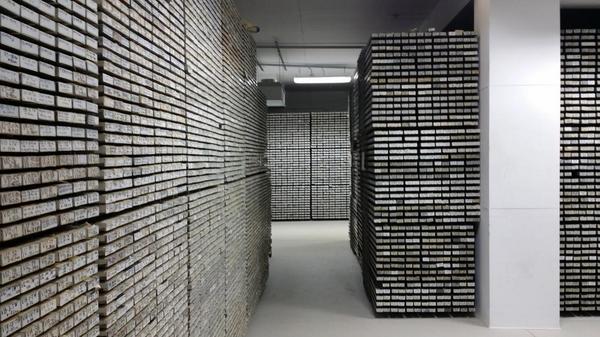 Tierney, deMenocal and colleagues had previously charted the Horn of Africa’s climate back 40,000 years by studying cores of marine sediment. They hoped to use the same means to reconstruct the region’s climate back 55,000 to 70,000 years ago, but the first challenge was finding a core with sediments that old. They found one at the Lamont-Doherty Core Repository. It had been collected in 1965 by the Lamont research ship Robert D. Conrad. DeMenocal dated its layers and found it had sediments going back as far as 200,000 years.

At the University of Arizona, Tierney and coauthor Paul Zander teased out temperature and rainfall records from organic matter preserved in the sediment layers. The scientists took samples from the core every 10 centimeters (about four inches), a distance that represented about every 1,600 years.

To construct a long-term temperature record, the researchers analyzed the sediment layers for chemicals called alkenones, made by a particular kind of marine algae. The algae change the composition of the alkenones depending on the water temperature. The ratio of different alkenones indicates the sea surface temperature when the algae were alive and also reflects regional temperatures.

To figure out the region’s ancient rainfall patterns, the researchers analyzed the remains of leaf wax that had blown into the ocean from terrestrial plants. Because plants alter the chemical composition of the wax covering their leaves depending on how dry or wet the climate is, this provides a record of past fluctuations in rainfall. The analyses showed that the time people migrated out of Africa coincided with a big shift to a much drier and colder climate, Tierney said.

The team’s findings are corroborated by research from other investigators who have reconstructed past regional climate by using data gathered from a cave formation in Israel and a sediment core from the eastern Mediterranean. Those findings suggest that it was dry everywhere in northeast Africa.

“Our main point is kind of simple,” Tierney said. “We think it was dry when people left Africa and went on to other parts of the world.”

The U.S. National Science Foundation and the David and Lucile Packard Foundation funded the research.