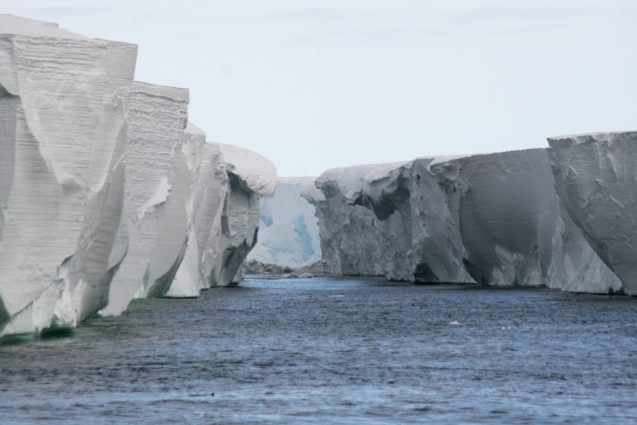 In March 2002, when satellite images showed that 1300 square miles of Antarctica’s Larsen B ice shelf—a slab bigger than the state of Rhode Island—had fragmented into a mass of floating ice chunks, scientists began to view Earth’s polar regions in a new way.

“Suddenly the possibility that global warming might cause rapid change in the icy polar world was real,” said polar geophysicist Robin Bell, lead scientist for the Changing Ice, Changing Coastlines initiative at Columbia’s Lamont Doherty Earth Observatory. When Larsen B broke apart, the glaciers feeding the ice shelf started slipping more rapidly into the sea, adding to its volume. “For a long time people didn’t think ice shelves mattered, but when Larson B broke up and we saw the ice streams speed up, we knew they mattered.”

In response, Bell and her colleagues developed a project to monitor the world’s largest block of floating ice. For two years, the Rosetta-Ice Project has been flying over Antarctica’s Ross Ice Shelf, assembling an unprecedented view of its structure and hints of how that structure is changing over time. Rosetta will fly for the last time this fall, but the project’s scientific legacy continue to thrive for decades to come.

The great ice sheets blanketing Greenland and Antarctica hold enough water to raise the global sea level by more than 200 feet. For context, a third of the world’s population lives within about 300 feet of sea level, and many of the planet’s largest cities are situated near an ocean. Ice shelves—floating platforms of ice—help to hold the ice sheets safely on land. The Ross Ice Shelf, roughly the size of France, helps to keep the West Antarctic Ice Sheet from flowing into the water and flooding coastal lands.

The Ross Ice Shelf covers an area the size of France, measures a few hundred meters thick and plays a critical role in maintaining the West Antarctic Ice Sheet by buttressing the ice that is constantly moving over the land surface. Where the East and West Antarctic Ice Sheets flow into the sea, glaciers and ice streams coalesce to form the ice shelf. As the ice continues to flow, seawater can cause melting and re-freezing at the shelf’s base. At the front of the ice shelf, icebergs calve off, leaving an ice cliff that reaches up to 50 meters above the sea surface. These interactions between ocean, ice and rock raise many questions that the Rosetta team hopes to answer.

Ice shelves, like icebergs, are mainly below the waterline. This means that the majority of the shelf is not visible to the unaided eye. Ten years ago, scientists wanted to find a way to study how the ice, ocean, and underlying land interact so they could identify potential change in the ice shelf from climate change. So Bell and a colleague developed the idea for a project that would achieve that level of understanding of the Ross Ice Shelf. At the time, the sophisticated equipment needed to track above and delve beneath and within the ice shelf had yet to be developed.

That changed with the American Recovery and Reinvestment Act of 2009. Bell’s team was awarded a multi-million grant to develop IcePod, an integrated ice imaging system that can measure in detail both the ice surface and the ice bed. The system is enclosed in a pod that is mounted on the rear door of an aircraft. The pod is equipped with instruments that collect an array of measurements and is deployed for routine and targeted missions across Antarctica and Greenland. With the ability to regularly collect concurrent data on the change in ice volume and the underlying processes, IcePod allows researchers to examine not just “how fast” the ice sheets are changing but “why.”

“Realizing we now had the tools, we put together a project and became the first team to systematically study the Ross Ice Shelf in 50 years,” said Bell.

The Rosetta-Ice Project, named for the enigmatic stone containing a decree written in three languages that led to the decoding of Egyptian hieroglyphics, is a large multi-disciplinary and multi-institutional project with several major goals tied to different parts of the ice shelf system. The Rosetta team, which includes scientists from Lamont, Scripps Institution of Oceanography, Colorado College, Earth and Space Research, and New Zealand’s GNS Science, has received funding from the Gordon and Betty Moore Foundation, the National Science Foundation, the Old York Foundation, and crowd-funding supporters to study how the ice, ocean, and underlying land interact. Findings from the project will help to determine the stability of ice sheets that flow into the ice shelf.

Seeing Through the Ice

IcePod’s instruments include two radars to image through the ice, lidar to measure the ice surface, cameras for surface images, and a magnetometer to better understand the tectonics and origin of the bed below the ice shelf. Together with the IcePod instruments, the project uses gravimeters in order to develop a map of the seafloor depth under the ice shelf. Gravity is a critical data piece in this project, as the radar is unable to image through the water under the ice shelf.

“The project is much like the Rosetta Stone,” said Lamont polar scientist Margie Turin. “The historic stone was inscribed in three different scripts, each telling the same story but in a different tongue. When matched together, the information was enough to allow scholars to decode an ancient language. The Rosetta Project in Antarctica also brings together three different ‘scripts,’ but in this case they are written by three Earth systems; the ice, the ocean, and the underlying bed each have a story to tell. Mapped together, these three systems can be used to unlock the mysteries of Antarctic ice history in this region and help us to develop models for predicting future changes in Antarctic ice.” IcePod’s instruments include two radars to image through the ice, lidar to measure the ice surface, cameras, and a magnetometer to better understand the bed below the ice shelf. Photo: NSF/Mike Lucibella

Ice shelves are vulnerable from two directions: warming air above and warming water below. Scientists have been measuring air temperatures for several years, but measuring water temperatures beneath the ice is more difficult. Bell and her colleagues in the Rosetta-Ice Project have been flying transects across the ice shelf over the past two years, using IcePod to map the floating ice shelf and the sea floor below it, looking in particular for troughs where less-cold water could be getting in and melting the ice shelf from below. They can locate high-risk areas, but they can’t measure the water temperature from the air. Deploying floats near these high-risk areas provides a low-cost solution. During last year’s polar summer, the Rosetta team launched six ALAMO (Air-Launched Autonomous Micro Observer) floats. These metal tubes packed with scientific instruments parachuted into the ice-cold waters of Antarctica’s Ross Sea, marking a new frontier in polar research. The ALAMO floats are the first explorers of their kind to begin profiling the water adjacent to Antarctica’s Ross Ice Shelf and sending back data in real time. Their mission: find vulnerabilities where warmer (but still near freezing) water from the deep ocean may be seeping in under the ice shelf and melting it from below.

This year the floats measured the water temperature at all depths, descending and rising every four days and moving along horizontally with the currents. Each time they surface, they phone home, relaying their latest measurements to a satellite, which then beams the data to scientists around the world.

Rosetta’s map of the ice shelf is now nearly complete. In October 2017, the team will embark on its final mission. During this two-month expedition, they will perform a series of eight-hour flights, transecting the ice shelf and completing the dataset.

“We still have a lot of work ahead just to get the basic mapping in place so that we can get improved and precise predictions about what Antarctica can do in the future,” said Kirsty Tinto, a member of Lamont’s polar geophysics group and a lead on Rosetta.

Once completed, the Rosetta-Ice Project will be a critical milestone in climate science.

“These data are going to be the basis for people to understand how ice shelves worked for decades,” said Bell. “People are going to be able to go back and measure the ice exactly where we flew to see changes. It’s going to become a benchmark data set. It’s a beautiful thing.”