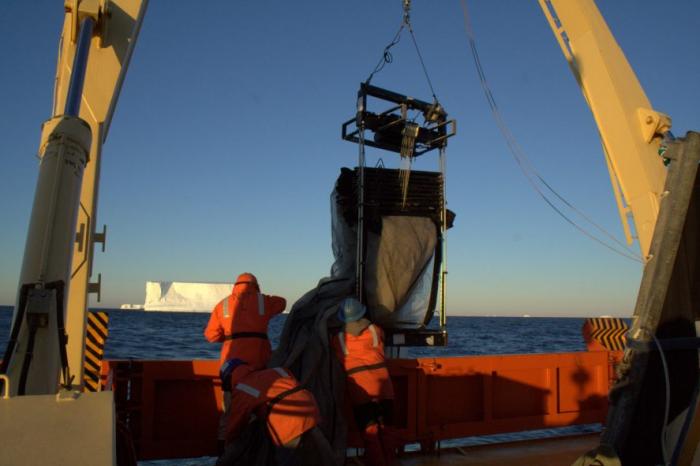 Soon after Obama departs the Oval Office, the scientists, who are on a five-week expedition aboard the U.S. icebreaker Laurence M. Gould, will stop at Ocean Station Obama, located at 67°46 South, 68°51 West in Antarctica’s Marguerite Bay.

The team of oceanographers, whale biologists and avian ecologists are participating in the annual Palmer Long Term Ecological Research (PAL LTER) research cruise, which surveys a 180,000-square-kilometer region of the Southern Ocean along the West Antarctic Peninsula each year.

PAL LTER, which began in 1990, is carried out under the U.S. Antarctic Research Program, a division of the National Science Foundation. The project examines the current state of the ocean ecosystem around the Antarctic Peninsula — and how it’s changing. The region is one of the most rapidly warming parts of the planet: Since 1950, air over the peninsula has warmed nearly 6°C in winter.

Scientists first collected data at Station Obama on January 20, 2009, the day of Obama’s first inauguration. Lamont-Doherty Earth Observatory and Center for Climate and Life oceanographer Hugh Ducklow, PAL LTER principal investigator, was one of them.

“People all around the U.S. and abroad were celebrating the historic election of the first African-American president, and we were also excited to have a new president who understood and respected science and was concerned about climate change. So we did our bit by naming our sampling location Ocean Station Obama,” Ducklow said in an email. 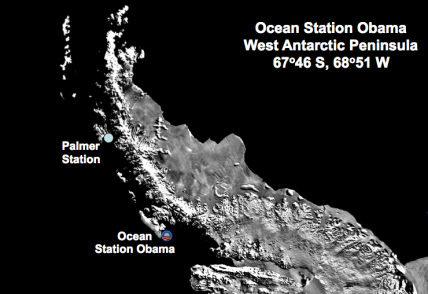 When the R/V Gould reaches Station Obama later this month, the team of scientists aboard will spend six hours collecting a suite of biological, physical, and chemical measurements.They’ll map sea ice cover from the ship and satellite observations, whale biologists will make shipboard visual and drone-based instrumental observations, and two penguin scientists will spend five days studying a nearby Adélie penguin colony.

Ducklow, chief scientist for the 2017 PAL LTER cruise, said, “We decided to reoccupy Station Obama eight years later to celebrate Obama’s presidency and the progress made in addressing climate change in that period, and call attention to grave concerns about the future under the new Trump Administration.”

“Under the Obama administration, the U.S. became a world leader in showing the way to developing a path towards dramatically reducing carbon emissions without sacrificing economic vitality,” Paul Falkowski, a Rutgers University oceanographer and guest investigator on the 2017 cruise, said in an email. “The incoming administration appears to want to destroy anything the Obama administration developed — and has no real vision, or concern about the consequences.”

Rapid climate warming is already impacting the West Antarctic Peninsula. Satellite observations made from 1979 to 2016 show that the annual sea ice season in the greater Station Obama area has become 3-4 months shorter over the last 38 years.

Most Antarctic marine organisms, from microscopic phytoplankton to the Adélie penguin, depend on sea ice to live and reproduce. The numbers of some of these species, such as the ice-loving Adélie, are already in decline. In 1974, PAL LTER scientists documented 15,000 breeding pairs of Adélies near the peninsula’s Palmer Station. There were 2,770 pairs in 2009. Today there are about 2,000 (the 2017 Adélie census is not complete).

PAL LTER researchers plan to visit Station Obama annually. The data they collect will be used to understand the functioning of this fragile ecosystem, and the pressures and threats it faces due to warming temperatures.

“Station Obama will provide a good baseline and a good sentinel for change in this region,” Ducklow said. “Data from this location will be available forever with President Obama’s name attached.”

It’s important to Ducklow that Obama’s commitment to the environment live on — and not just in the Southern Ocean.

“It would be great if other field scientists also dedicated a regularly-sampled site to Obama, our science president.”

To learn more about PAL LTER research and the changes occurring in the Antarctic marine ecosystem, see the documentary Antarctic Edge: 70 South.