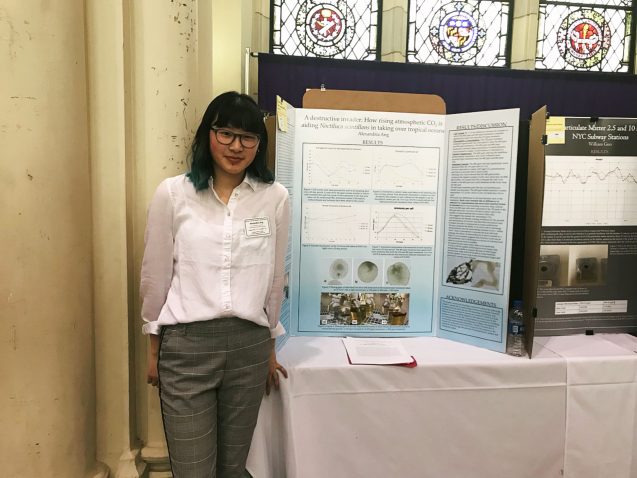 On May 18th, an 18-year-old Bronx High School senior will stand in a Pittsburgh convention center and present to an audience of top science thought-leaders. She’ll be explaining her discoveries about a rare, enigmatic organism that has been invading the Arabian Sea at alarming rates, threatening the way of life for some 150 million people.

That student is Alexandria Ang. That organism is called Noctiluca scintillans. Both are quite remarkable in their own, very different ways.

Ang was recently selected as one of the finalists in the Intel International Science and Engineering Fair (ISEF), a highly prestigious annual competition, which takes place in Pittsburgh next month. She will be competing for a range of possible honors, but the top award comes with a $75,000 prize.

For all her accomplishments, the honor and her shot at that prize took her off guard.

“The first word that pops into my head is shock. I could never have imagined myself as an Intel finalist,” said Ang. “Not because I don’t think my work deserves it, but because I had received harsh criticism during the finals round.”

The competition is rigorous, according to Lamont-Doherty scientist Joaquim Goes, a leader in marine biology who has been mentoring Ang. Each year, millions of high school students around the world participate in local science fairs for a chance to compete in the Intel ISEF. Of those millions, approximately 1,800 get a chance to present their independent research and compete for roughly $4 million in prizes.

Despite the steep odds, Ang, who initiated and performed breakthrough scientific research while interning in Goes’ lab, managed to stand out from the crowd.

“It is the dream of every high school student to win at ISEF,” said Goes. “Much recognition and honor come with it, in addition to the monetary prizes.”

“The top award would be amazing to win, but [win or not] I’m definitely looking to be noticed by some oceanic or environmental science organizations,” said Ang. 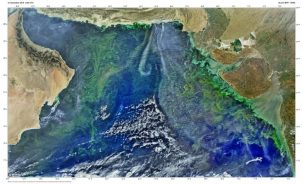 Goes’ lab conducts leading research into the relatively recent proliferation of Noctiluca, the climate change-driven algae whose greenish blooms plague the Arabian Sea. This plankton-like species was all but unheard of in the Arabian Sea twenty years ago, but is now demonstrating a unique capacity to survive and thrive, disrupting the regional food web and threatening fisheries that sustain millions of people. Ang first came to explore Noctiluca at Goes’ lab at Lamont during the summer of 2016.

“Before she stepped into our lab, Alexandria had decided that marine biology was her career path, and from the day she was introduced to us, she appeared to have been well-informed about our work and wanted to tackle any research that related to Noctiluca, which she found to be a fascinating organism,” said Goes.

“I knew that I wanted to do work that was both impactful and most importantly unique,” recalled Ang. “The fact that Joaquim’s lab was focusing their research on a relatively new species in the scientific community sealed the deal for me.”

Last summer Alexandria came back to Lamont and to Noctiluca with her own research project in mind.

“This time she came back with the idea of examining whether changes in the environment like ocean acidification, warming or hypoxia were responsible for the outbreaks of these blooms. We decided to go ahead with a project on CO2, which drives ocean acidification,” Goes explained.

“Alexandria’s experiments showed that Noctiluca grows faster under high CO2 conditions, and that future projections of an increase in atmospheric CO2 would favor organisms like Noctiluca over others,” explained Goes.

For Ang, the fact that her work is making such a meaningful contribution to this science is a source of great satisfaction.

“It’s honestly been an indescribable feeling. Through the journey of becoming an ISEF finalist, I have been able to share my research with the public, students, teachers, scientists, and researchers. It always makes me so happy to see their faces light up in awe when I explain the threat that this species poses,” said Ang.

Ang plans to attend Macalester College in Saint Paul, Minnesota in the fall to pursue biology and environmental science research. True to form, she has some very specific, ambitious career plans.

“My dream is to work for the EPA or the National Oceanic and Atmospheric Administration. When I was a kid I only ever wanted to be a marine biologist. Now I feel like I’m definitely on the right path, and I’m making a real difference.”

The ISEF will announce the award winners during the May 18 ceremony in Pittsburgh.