Climate Change is Destroying a Barrier That Protects the U.S. East Coast from Hurricanes 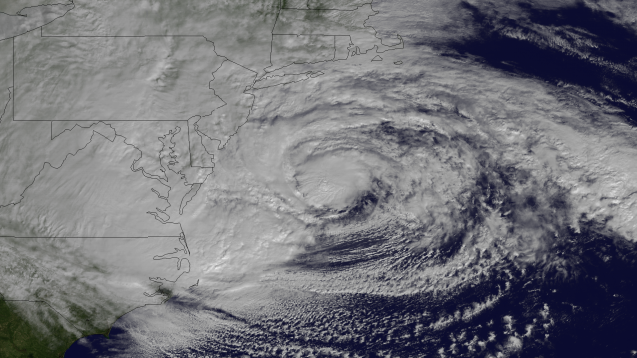 A new study suggests that climate change could soon eliminate an atmospheric barrier that protects much of the U.S. East Coast from powerful hurricanes.

Severe hurricanes can cost up to hundreds of billions of dollars in damages. The destruction left in the wake of Atlantic hurricanes has been increasing over time in recent decades, according to scientific studies. However, it has been difficult to predict whether and how hurricanes will continue to increase in intensity and impacts.

There are two main factors that contribute to hurricane development and intensity: sea surface temperature and vertical wind shear. Vertical wind shear is the difference in wind speed or direction between the upper and lower troposphere. Warmer sea surface temperatures and low wind shear (meaning the wind speeds and directions are similar throughout the column of air) both raise the potential intensity of a hurricane. Scientists knew that ocean temperatures are heating up, but until now it has not been clear how climate change would impact wind shear.

A new paper, published today in Scientific Reports, finds that climate change could alter wind shear in a way that could deliver more powerful hurricanes to the East Coast. The study is authored by scientists from Columbia University’s Lamont-Doherty Earth Observatory and the National Oceanic and Atmospheric Administration.

The new paper builds off of a talk NOAA’s James Kossin gave at an Extreme Weather and Climate Initiative meeting at Columbia University in 2017. Kossin spoke about how, as hurricanes move northwestward out of the tropical Atlantic, a strong vertical wind shear along the East Coast prevents the storm from gaining strength, thus providing a protective barrier to strong landfalling hurricanes. Lamont Research Professor Mingfang Ting had the idea to build upon Kossin’s findings with the application of her own modeling to explore how a changing climate might affect this wind shear pattern.

Ting and Kossin, along with Lamont researchers Suzana Camargo and Cuihua Li, used model simulations to examine the effects of climate change on hurricanes in the United States. The group found that these hurricanes will be affected in two different ways. As earlier studies have shown, rising sea surface temperatures will lead to an increase in hurricane intensity. But this study was the first to find that rising anthropogenic greenhouse gases in the atmosphere will weaken the vertical wind shear along the East Coast which will, in turn, enable further intensification of hurricanes that make landfall in this region.

“Once the natural protection is eroded by greenhouse gas warming, we may experience unprecedented hurricane intensification along the East Coast that can lead to stronger landfalling storms and higher storm surges in the future,” Ting explains. “This is on top of the stronger tropical cyclone strength expected from the warmer sea surface temperature that we are already aware of. Home owners and policy makers have to take this into account when planning for coastal development and protections.”

Although climate change is typically a slow process, the models point to the possibility of these anthropogenic effects emerging quickly. One of the models with a larger number of simulations indicated that these effects could start to be seen around the year 2040. A timeline like that only gives us about 20 years to try to change course by taking actions to reduce climate change and, at the very least, prepare for more extreme weather events.