With Climate, Fertilizing Oceans Could Be Zero-Sum Game

News Subtitle:
In Pacific, Added Iron May Not Pull Carbon From Air as Thought

Scientists plumbing the depths of the central equatorial Pacific Ocean have found ancient sediments suggesting that one proposed way to mitigate climate warming—fertilizing the oceans with iron to produce more carbon-eating algae—may not necessarily work as envisioned.

Plants need trace amounts of iron to perform photosynthesis, but certain parts of the oceans lack it, and thus algae are scarce. Recent shipboard experiments have shown that when researchers dump iron particles into such areas, it can boost growth.  The algae draw the greenhouse gas carbon dioxide from the air to help build their bodies, so fertilization on a large scale could, theoretically, reduce atmospheric CO2. Seafloor sediments show that during past ice ages, more iron-rich dust blew from chilly, barren landmasses into the oceans, apparently producing more algae in these areas and, presumably, a natural cooling effect. Some scientists believe that iron fertilization and a corresponding drop in CO2 is one reason why ice ages become icy and remain so. 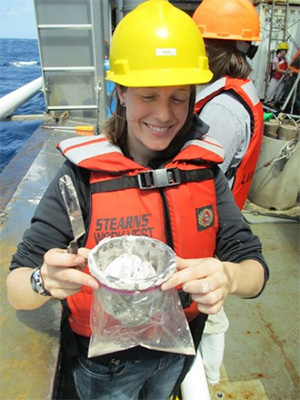 Scientists on a research cruise in the central equatorial Pacific collected seafloor sediments showing that nutrient cycling in one part of the ocean may affect another region far away.  Here, a researcher from Georgia Institute of Technology checks out newly retrieved mud. (Pratigya Polissar/Lamont-Doherty Earth Observatory)

But the researchers in the new study say that increased algae growth in one area can inhibit growth elsewhere. This is because ocean waters are always on the move, and algae also need other nutrients, such as nitrates and phosphates. Given heavy doses of iron, algae in one region may suck up all those other nutrients; by the time the water circulates elsewhere, it has little more to offer, and adding iron doesn’t do anything. The study appears today in the leading journal Nature.

“There’s only a limited amount of total nutrients in the oceans. So if there’s greater use in one area, it seems you’d have lesser concentrations in other areas,” said lead author Kassandra Costa, a doctoral student at Columbia University’s Lamont-Doherty Earth Observatory who led the analysis. “The basic message is, if you add to one place, you may subtract from another.”

Much of the equatorial Pacific’s near-surface water comes from the Southern Ocean. In the southerly latitudes, powerful winds circle Antarctica. This stirs things like a giant ladle, dredging large amounts of nitrates, phosphates and other nutrients from bottom waters where they tend to settle—so much so, that the nutrients can’t all be used up by resident algae. This makes the Southern Ocean an attractive place for potential artificial fertilization; experiments have shown that adding iron there does cause more algae to grow. 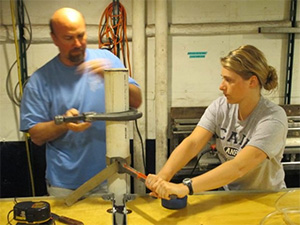 Much of this nutrient-rich water eventually sinks and circulates below the surface to the mid-Pacific; the journey takes a century or two. At the equator, the southern water meets with opposing currents from the north and rises, making the nutrients available to near-surface algae. But most of these nutrients pass on by; the mid-Pacific is too far from iron-rich dust sources on land for algae to make much use of them.

In 2012, Lamont scientists conducted a research cruise in this remote region, and took cores from the seabed. Costa and her colleagues analyzed sediments from the cores dating to the last ice age, some 17,000 to 26,000 years ago. As expected, they found two or three times more dust reaching the area compared to today, due to reduced plant cover in the cold, dry climate. Marine plant growth might have been expected to have increased accordingly, but it didn’t. The sediments showed that productivity stayed the same, or even declined. Their conclusion:  algae in the southerly latitudes, which also got dusted at the same time, snapped up the iron—along with most of the other nutrients. That left the Pacific algae high and dry.

“This shows how different parts of the system are connected,” said Lamont marine geochemist Jerry McManus, a coauthor on the paper. “If you push hard in one place, the system pushes back somewhere else.” This undercuts the idea that iron fertilization could be a major force in spurring and maintaining ice ages. He said. "That doesn't mean it's not an influence, but the global system may be self-regulating and [that] reduces the potential impact of fertilization," he said. The study does not say so, but McManus adds that it also suggests “we should be very careful about thinking we can use artificial fertilization to combat climate change.”

Recently researchers have done a series of artificial iron fertilization experiments. These have ranged from a 2012 privately sponsored seeding off British Columbia said to have produced a 10,000-square-mile algae bloom, to a similar 2009 German cruise in the southwest Atlantic. Some earlier projects were done in the southern ocean—the place “where you get the most bang for your buck,” said McManus. Because iron is needed only in trace quantities, researchers have calculated that in some areas, each kilogram added could produce 100,000 kilograms of algae, at least locally.

The most recent experiments have sparked protests from environmental groups. Some scientists say iron dumping could alter marine ecosystems in unpredictable and possibly harmful ways. Another problem: for excess carbon to be truly locked away, it must sink to the seafloor when the algae die. Some studies have suggested that while algae may grow quickly when fertilized, much of the carbon they take up remains near the surface for hundreds of years, cycling through other marine creatures, or bleeding directly back into the air.

Phoebe Lam, an oceanographer at the University of California, Santa Cruz, who studies marine cycling of iron and carbon, said the paper “shows there are downstream consequences to anything you do in the ocean. It’s what the geoengineers don’t necessarily think of. It makes the idea of artificial iron fertilization require a discussion of much more subtlety.”

Sylvain Pichat, a marine geochemist at the University of Lyon, said the study “indeed shows that we need to think about the oceans and the climate system as a whole.”

Earlier this month, British researchers published a study showing how much still remains to be discovered: they observed that big icebergs increasingly calving off Antarctica are releasing vast trails of iron as they melt, triggering algae blooms for hundreds of miles—a possible mechanism that one could speculate might eventually push back against the manmade forces implicated in the calving.

The other authors of the study are Robert Anderson, Gisela Winckler and Martin Fleisher, all of Lamont-Doherty; Haojia Abby Ren of National Taiwan University; Daniel Sigman of Princeton University; Franco Marcantonio of Texas A&M; and Ana Christina Ravelo of the University of California, Santa Cruz.