It has been an extraordinary year of exploration and discovery at Lamont. During the month of December, as 2017 draws to a close, we are sharing a series of articles on our website that capture research highlights of the calendar year. This is the second article in the series. 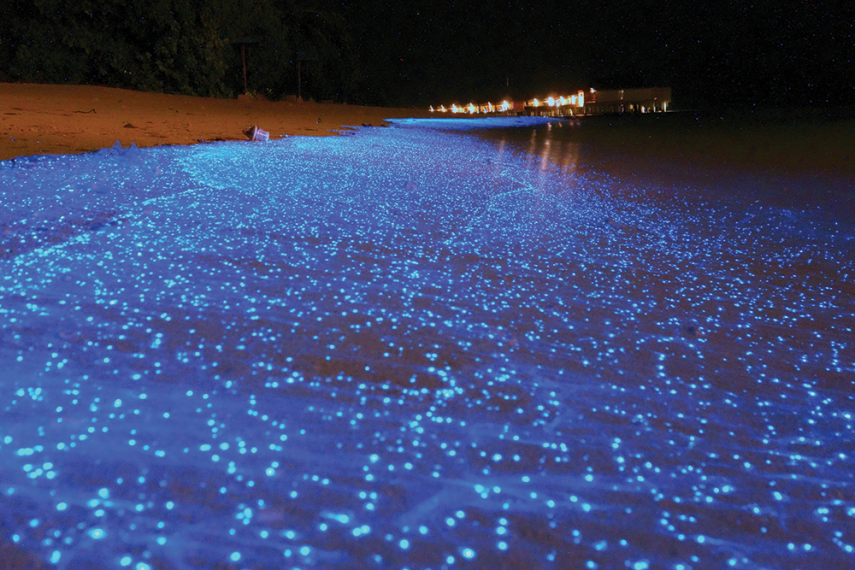 By night they glimmer, lighting up the surf of the Arabian Sea a phosphorescent blue. By day they appear as a thick, slimy, malodorous green blanket over the ocean. Nicknamed “sea sparkle” for their nocturnal appearance, these unusual plankton-like species are silently taking over the base of the regional food chain and threatening fisheries that sustain 150 million people. They are Noctiluca scintillans, a dinoflagellate that were all but unheard of in the Arabian Sea 20 years ago, but they are now demonstrating a unique capacity to survive, thrive, and force out diatoms, the planktonic species that traditionally support the Arabian Sea food web. Typically, diatoms are gobbled up by small sea animals, or zooplankton, which are in turn eaten by larger fish and sea creatures. Noctiluca has short-circuited this system.

These 1-millimeter-sized creatures have tail-like flagella, which enable them to move around as well as gather and eat other microscopic plankton (living or dead). The flagella also allow the organisms to swim up to the light, drawing energy that nourishes thousands of green algae, or “endosymbionts,” living within Noctiluca’s globular, transparent cells. This dual mode of obtaining food and energy for growth and survival gives the species an edge over diatoms and other phytoplankton, which survive on sunlight and photosynthesis alone. The blooms first appeared in the late 1990s. Since then they have grown and spread, creating destruction and alarm in their stinky green wake.

“This is probably one of the most dramatic changes that we have seen that’s related to climate change,” said Lamont-Doherty Earth Observatory oceanographer Joaquim Goes. “We are seeing Noctiluca in Southeast Asia, off the coasts of Thailand and Vietnam, and as far south as the Seychelles, and everywhere it blooms it is becoming a problem. It harms water quality and causes a lot of fish mortality,” said Goes. 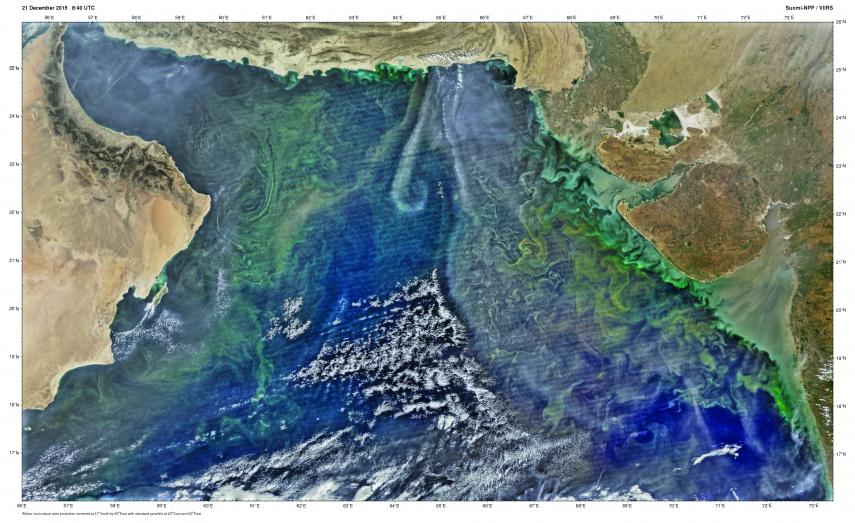 Goes and Lamont oceanographer Helga do Rosario Gomes are among a team of researchers who have been studying this organism for the past 15 years. They recently teamed up with Lamont’s Ryan Abernathey, a physical oceanographer, and
Columbia Data Science Institute’s Tony Jebara, a computer scientist, to use hydrodynamic models and machine learning techniques to study the evolution of Noctiluca blooms in the Arabian Sea, visible in daily images captured by NASA satellites. Satellite technology as well as field and ongoing laboratory experiments have enabled scientists to link the algae to higher concentrations of CO2 and lower levels of O2 in the Arabian Sea, changes that are driven by climate change and shrinking of the glaciers and snow cover in the Himalayas.

“We have evidence to show that snowcaps have been diminishing considerably since the late 1990s, exactly the time Noctiluca began appearing,” Goes said. 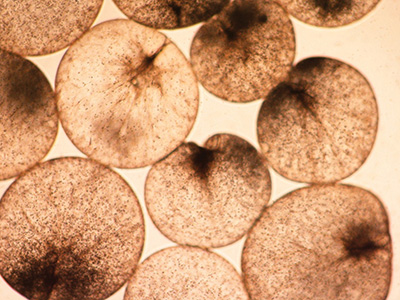 As snow retreats from the Himalaya-Tibetan plateau, the Indian subcontinent has grown hotter in summer compared with the Arabian Sea, causing the summer monsoon winds blowing toward India to strengthen. Stronger winds bring up more nutrients off the coasts of Somalia, Yemen, and Oman; Goes and his collaborators estimate that this change has triggered a ~350 percent increase in phytoplankton between 1997 and 2004.

“This nutrient-rich water comes to the surface and causes a huge bloom of normal phytoplankton – one would expect this to be good for fisheries,” Goes remarks. The problem is that the Arabian Sea has become over productive, and zooplankton that feed on phytoplankton cannot keep pace.

As a result, these phytoplankton are uneaten and die of other causes. Bacteria then act upon them, consuming oxygen from the water in the process. Falling oxygen levels have favored Noctiluca in its competition with diatoms and other phytoplankton. Unlike diatoms, Noctiluca thrive in low-oxygen water. The impact of the spreading blooms is vast and growing, especially in Oman, where locals have depended on artisanal fishing for centuries as their major source of protein. Thick blooms reduce visibility, making it difficult for divers to repair ships underwater. They clog the intake pipes of the desalinization plants that produce up to 90 percent of the country’s fresh water, affect the intake waters for refineries, and are a deterrent to tourists who come to Oman for rest and recreation.

These impacts have imparted an urgency to Noctiluca research. Among the priority projects, NASA has provided Goes and his colleagues nearly one million dollars to develop decision support for Oman. The study partners scientists from Lamont, the Ministry of Agriculture and Fisheries Wealth, the Marine Sciences and Fisheries Centre, and Sultan Qaboos University to build upon previous NASA-funded efforts to develop a Decision and Information System for the Coastal waters of Oman (DISCO). With remote sensing and modeling information, DISCO will provide decision makers and stakeholders in Oman tools to manage coastal resources. For example, with enough warning the aquaculture industry can mobilize in advance of an outbreak, moving fishery cages to “safer” regions before Noctiluca invade. Local bodies, such as the Ministry of Agricultural and Fisheries Wealth in Oman and the Sultan Qaboos Cultural Centre, are also partnering to understand and develop strategies to mitigate and arrest the spread of Noctiluca.

Efforts to understand Noctiluca in order to control the spread of these blooms are leading Goes and his team to probe the intracellular environment of the organism to fathom how it functions, thriving in oxygen-deprived environments, conditions that stunt and kill most other creatures. They want to know why, when all other organisms die, Noctiluca survive. 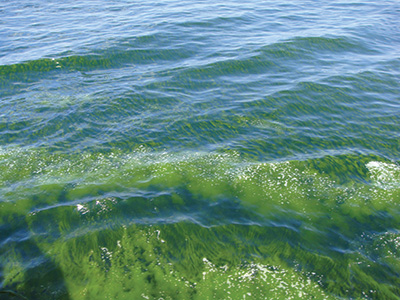 Studying live culture in the lab, Goes and Gomes work with a team of undergraduate and high school interns to understand what causes the endosymbiont population within Noctiluca to thrive. They have seen that the Noctiluca is able to use its flagellum
to pick food directly or create a vortex around the cell, drawing food into the organism’s food chamber, where enzymes eventually break down the food and release ammonia, urea waste, and CO2 into the chamber that houses the endosymbionts. Aspects of the organism’s metabolic processes remain a puzzle. Specifically, researchers want to know how the endosymbiont organisms manage to survive in the small environment within Noctiluca and what process makes the Noctiluca extraordinarily resilient even under conditions that are hostile for other plankton.

“This organism is unique. It survived in our lab for about two and a half years without any nutrients. It’s a new branch of food web dynamics.” said Goes.

To dive deeper into an understanding of Noctiluca, Goes turned to renowned nanoscientist Ken Shepard, Lau Family Professor of Electrical Engineering and Biomedical Engineering at the Columbia School of Engineering and Applied Science. Shepard has been leading breakthrough research using extremely small microchips, known as nanochips. Together, Goes and Shepard and their teams are experimenting with the Noctiluca culture and plan to insert electronic microchips into the food and central chambers of the organism by either “microinjection” or “feeding” them directly to the Nocticula. Once implanted, the chip will give researchers a chance to monitor how this organism routinely functions and how it responds to different changes in environmental conditions.

“Noctiluca is a huge problem. I’ve been to different parts of the world, as far north as the Arctic, and down to the Antarctic, but I’ve never seen anything like this. This is the most rapid and striking shift in the marine biosphere that has taken place in the last 15 years, and it’s affecting the Arabian Sea ecosystem severely,” said Goes. Each year the bloom occupies an area thrice the size of Texas. This is huge by any standards. If CO2 levels in Earth’s atmosphere continue to rise, these blooms could become even more widespread, affecting millions more people. Through their studies, they hope to stop the seemingly unstoppable.