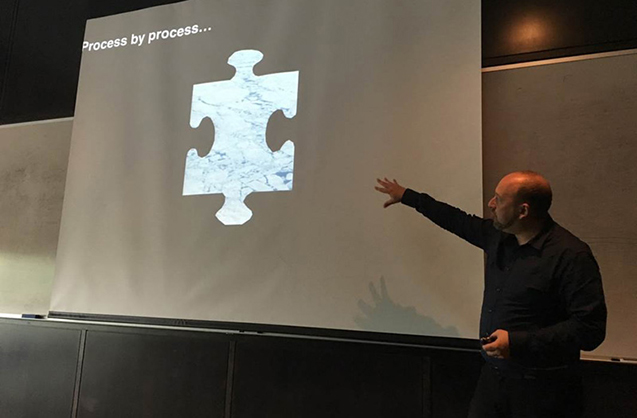 If you want to understand how scientists think about their subjects, sit down with a group of them and start a conversation.

Two dozen middle and high school educators got that opportunity during a workshop earlier this month with scientists at Columbia University's Lamont-Doherty Earth Observatory. The event started with presentations by two scientists discussing their very different approaches to studying Earth’s climate history, one through natural climate records and the other through computer modeling. It paused for a debate over hypothesis testing, then moved on to small group discussions with a dozen additional scientists and ideas for inquiry-based learning activities for students.

The event was part of a larger scientific workshop titled “Comparing data and model estimates of hydroclimate variability and change over the Common Era,” led by Jason Smerdon, a climate scientist at Lamont, and funded by PAGES (Past Global Changes) and The Climate Center at Lamont.

In talks from Gavin Schmidt, a climate modeler and director of NASA’s Goddard Institute for Space Studies, and Kim Cobb, a paleoclimatologist at the Georgia Institute of Technology, the educators learned about ways scientists use paleoclimate techniques, such as analyzing the growth rings of corals, to estimate climatic conditions dating back hundreds of years, and how computer models can expand understanding of the causes of hydroclimate variability and changes over the last several millennia. They also discussed the availability of datasets for students to start their own scientific inquiries.

Ryan Higgins, school supervisor at the Academy of Earth and Space Science in Paterson, NJ, said, “I had a great time and enjoyed the opportunity to listen to the presentations and meet with scientists afterwards, and the debate about scientific methods was extremely interesting and useful.” Virginia Sullivan, a high school Earth science teacher at Murry Bergtraum High School in Manhattan, said “as a science teacher, when we attend professional development, it is usually geared toward the classroom aspects and not the science, so I really enjoyed talking with the speakers about the science.”

Engaging educators through professional development workshops, public events, and lectures is an important part of the Observatory’s education and outreach mission. Scientists are committed to integrating research and education across K-12, undergraduate, and graduate levels. Through outreach activities, the Observatory is committed to the dissemination of research knowledge through a variety of formal and informal ways.

“These educational outreach events allow teachers to interact with scientists at the Observatory and their colleagues from all over the world,” Smerdon said. “The environment and timing allows the teachers to engage these scientists on cutting-edge subjects in their field while offering a personal and interactive experience. We hope it is beneficial for the teachers; it is certainly helpful for the scientists who are forced to think about foundational educational questions and how they relate to their own research.”