Could Climate Change Breed a Whole New Category of Hurricane? 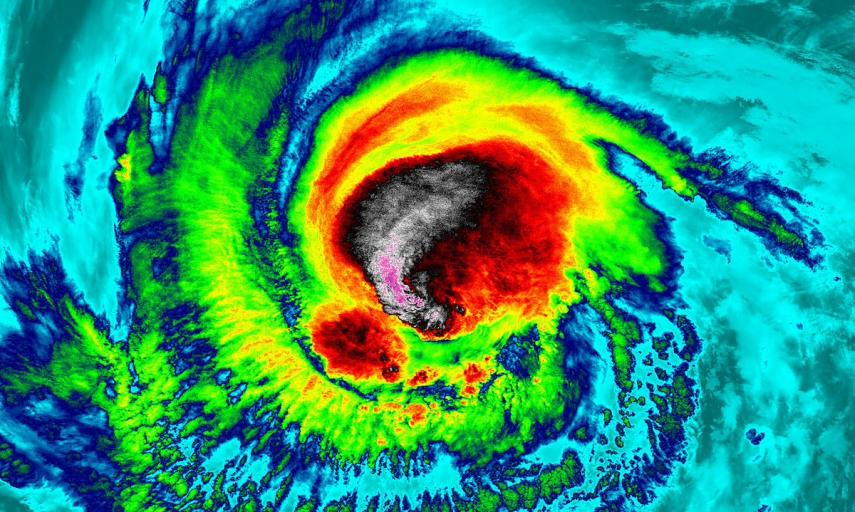 Hurricane Irma raged into the Caribbean this week as a Category 5 storm, taking at least nine lives so far, leaving a million Puerto Ricans without electricity, and reducing the island of Barbuda to rubble. And it’s not done yet; the storm is expected to strike Florida in a few days.

With winds reaching 185 miles per hour, Irma is the strongest storm that’s ever been recorded outside the Caribbean and Gulf of Mexico, and it came awfully close to matching the fastest-ever hurricane speeds of 190 mph. Irma maintained those 185-mph winds for two days straight, a record-breaking length of time for an Atlantic storm, fueled by the water’s warmer-than-usual temperatures. Those stats caused some meteorologists to wonder whether Irma should be in an entirely new category of storm.

Meteorologists tend to rank hurricanes by their wind speeds. They use the Saffir-Simpson scale, and it sorts tropical cyclones into categories 1 through 5, with 5 being the most dangerous. A Category 1 storm, for example, has winds between 74 and 95 miles per hour and will cause some damage. At the other end of the scale, Category 5 includes any storm with wind speeds over 156 miles per hour—storms that can cause cataclysmic damage. Category 5 covers a much broader range than the others, and some hurricane experts have pointed out that if it were broken up in the same method as the others, then Irma would be considered a Category 6.

Some media outlets (and/or hoaxes) mistakenly reported that Irma was classified as a Category 6 hurricane. No such category currently exists. But with the climate changing, warmer oceans are predicted to funnel extra energy into storms, causing a higher proportion of stronger hurricanes.

“One could make a case that Irma, and many other historical storms around the globe, could have been designated as Category 6,” says Radley Horton, a climate scientist at Columbia’s Lamont-Doherty Earth Observatory. The argument for a Category 6 is bolstered, he says, by the fact that higher wind speeds can cause disproportionately more damage. So, for example, the difference in potential wind damage between a 190-mph ‘Category 6’ hurricane versus a 156-mph Category 5 would be much greater than the difference between a 111-mph Category 3 and a 74-mph Category 1.

However, since the 156-mph winds have the potential to totally devastate an area, would it really be meaningful to add a category beyond that? Suzana Camargo, who studies hurricanes at Lamont-Doherty, doesn’t think a Category 6 designation would be helpful, and she’s not alone. “While storms with the category of Irma are rare in the Atlantic, they’re not as rare in the western North Pacific and the Saffir-Simpson scale works well there,” she says.

But as the world warms, the upper limits on a hurricane’s potential intensity are expected to rise, which might justify adding more categories to the scale in the future, suggests Timothy Hall, who models hurricane risk at the NASA Goddard Institute for Space Studies. “In the future, there may be storms that are more intense than anything we’ve seen before, because the roof of intensity is higher. If those really intense storms get more frequent, it might be convenient to develop a new distinction between the very destructive versus extremely destructive storms.”

Although most predictions suggest that climate change will bring us more strong storms like Irma in the future, “it is not a sure thing,” cautions Horton. Storms this powerful are rare enough that scientists don’t know what is a “normal” number of storms of this strength. Historical records only go back so far, and equipment that measures the intensity of a hurricane is relatively new, so it’s difficult for scientists to find a trend in the limited data. So while scientists expect that warming of the sea surfaces will make hurricanes more intense, says Horton, it’s also possible that other factors, such as changes to wind conditions in the atmosphere, could end up reducing severe hurricanes.

Meteorologists have discussed adding a new category to the scale in the past, but for the foreseeable future, they’ll have to continue making-do with the current scale of 1 to 5.

And scientists who study weather and climate are used to dealing with imperfect measures for a storm’s hazards; the Saffir-Simpson scale only measures wind speeds, which are not the only source of danger from a hurricane. Hurricane Harvey was only a Category 3 hurricane, but last week it flooded Texas with a devastating amount of rainfall, causing some of the worst storm-related damages in history.

“Emphasis on wind speed, while important, risks obscuring an even more important point,” says Horton. Wind speed is easy to measure and predict, but storm surge—a rise in ocean water around the hurricane—is one of the most dangerous aspects of a tropical cyclone, and it can’t be predicted from wind speed alone. It depends on how large the storm is, the shape of the coastline, and the topography of the sea floor.

“While simple indicators—such as wind speed—can have enormous value, they cannot fully define local risk,” says Horton. “This fact is an argument for a more complex and nuanced way of measuring a hurricane’s danger.”