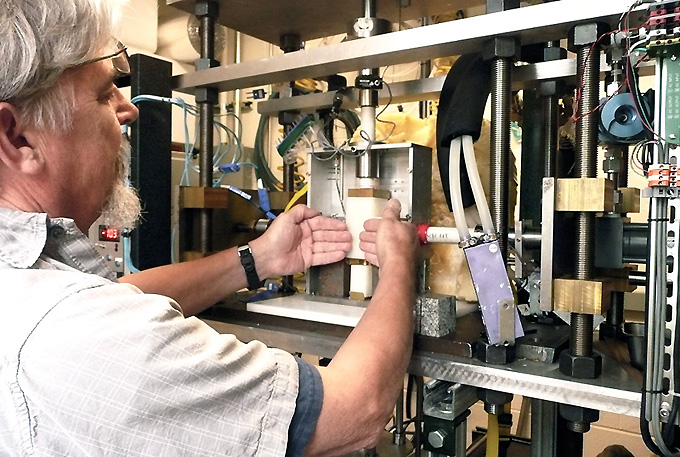 Research engineer Ted Koczynski explains how rock surfaces put pressure from each side on a moving block of ice in the new cryogenic deformation apparatus. Depending on the configuration, sensors can measure friction, viscosity and anelasticity. Image: Lamont-Doherty Earth Observatory.

Ice as we know it is pretty much the same whether it’s flowing as a Greenland glacier or covering one of Saturn’s icy moons, but it can behave very differently from one location to the next. The surface it’s sliding over, how much weight it’s carrying, chemicals in the environment, even the energy of the tides can affect its flow.

To understand how quickly ice from glaciers and ice sheets can raise sea level or how moons far across the solar system evolved to hold vast, ice-covered oceans, we need to be able to measure those forces at work.

Geophysicists Christine McCarthy, who studies ice, and Heather Savage, who works with rock mechanics, teamed up to develop a way to do just that at Columbia University’s Lamont-Doherty Earth Observatory. With engineer Ted Koczynski and former student Michael Nielson, they designed and built a new instrument that measures how ice responds under a wide range of conditions important to Earth and planetary science. 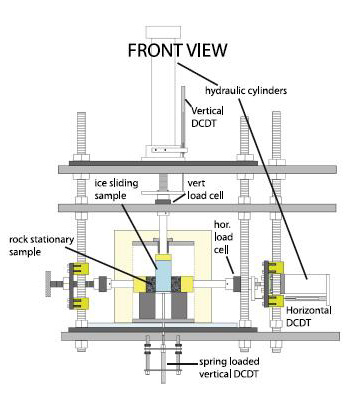 At the heart of the new device is a small block of ice sandwiched between two rocks that simulate the texture of the rock bed beneath a glacier. The rocks are pushed together with a force that replicates the weight of the glacier overhead. Then a hydraulics-driven piston slowly pushes the ice down past the rocks—either steadily or in waves that imitate tidal changes—and sensors measure the forces at work. The scientists keep the whole thing at a constant temperature by circulating a water-methanol mixture through cooling blocks attached to the side of an aluminum cryostat that is chilled to match the temperature at the bottom of Earth’s glaciers, typically between 0°C and -20°C. To test conditions on much colder icy moons, the team is developing a second cryostat with fluid that circulates through a liquid nitrogen-cooled chamber to reach -90°C.

The design borrows from a classic device called a biaxial deformation apparatus, which the Lamont Rock Mechanics Lab has used for years to study the behavior of faults and earthquakes. Other universities have tried to study ice deformation using large biaxial rock devices with some success. Lamont’s ice-specific version is designed with special temperature controls and sensors to explore three basic properties fundamental to the behavior of ice: friction, viscosity, and anelasticity, which is the ability to turn periodical mechanical energy, such as from tides, into heat.

The team’s first experiments, described in the latest issue of the journal Review of Scientific Instruments, used a simple system of ice on rock to test out the instrument. A second paper currently in review explores the rate-state friction laws for the ice-on-rock system using two classic rock mechanics experiments. One experiment measured changes in friction by changing the speed that the ice was pushed between the rocks from a steady pace to a sudden jump in velocity. Another explored “frictional healing” by starting and stopping the movement, with increasing delays between movement. The team is now testing rough-up rock surfaces to more accurately mimic the till and the fine rock dust created on the glacial bed as glaciers scour the rock below.

“One by one, you start adding complications, and that’s where you get to really contribute to the field,” McCarthy said. “You can say definitively, this affects this in this known way.”

Models involving ice flow tend to treat the behavior of ice at the base of the glacier as either frozen and not moving or sliding away on melt, McCarthy said. “Our study has shown that there’s a continuum of sliding based on temperature,” she said. “We’re trying to provide more realistic values for models that try to predict how fast glaciers are moving over time. Particularly with changes in climate and other forcings, we want to know those long-term predictions.”

NASA’s interest in the new cryogenic deformation apparatus goes far beyond Earth’s cryosphere to icy moons elsewhere in the solar system where temperatures are much colder. Studies of some of the moons orbiting Saturn and Jupiter have suggested that they are covered by ice, possibly with oceans underneath. 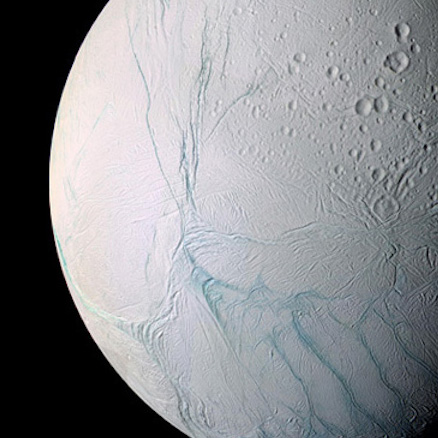 On Saturn’s moon Enceladus, where temperatures reach an estimated -180°C, the Cassini spacecraft found geysers in the moon’s icy crust, raising more questions about ice behavior. It’s possible that chemicals present in the moon’s environment could significantly lower the melting point of ice, similar to how salt tossed on a sidewalk in winter prevents ice from forming, McCarthy said. Her team plans to incorporate small amounts of ammonia and sulfuric acid in future experiments to try to replicate that behavior at low temperatures and explore whether melt can be produced with small amounts of frictional heating, even at such low planetary temperatures.

The project to design an apparatus to study forces on ice started with a $25,000 grant from the Lamont-Doherty Earth Observatory Innovation Fund, established by the Observatory’s Advisory Board. McCarthy’s team used that to start the design and secured larger grants from NASA, the National Science Foundation, and the Brinson Foundation.

“The goal of the Innovation Fund is to give you the seed money, get started, and get some research funds to take it somewhere,” McCarthy said. “This is definitely a success story.”