The sampling site and schematic of sediment trap array deployed in 2010/2011 and 2012/2013, with NOAA Okeanos Explorer bathymetry data included.

Scientists working in the Gulf of Mexico have found that contaminants from the massive 2010 Deepwater Horizon oil spill lingered in the subsurface water for months after oil on the surface had been swept up or dispersed. In a new study, they also detailed how remnants of the oil, black carbon from burning oil slicks and contaminants from drilling mud combined with microscopic algae and other marine debris to descend in a “dirty blizzard” to the seafloor.

The work, published May 30 in the Proceedings of the National Academy of Sciences, confirms that contaminants found in the water column and on the seafloor were indeed from the Deepwater Horizon spill, and not from the many natural oil seeps in the Gulf. The initial dispersal of materials in the water made pollutants hard to detect, but the eventual accumulation of “marine snow” concentrated the toxins on the seabed, where they can enter the food web, possibly affecting fish and corals in deep waters.

The findings suggest that the ecological effects of oil spills could last longer than previously thought. The paper comes on the heels of the most recent spill, detected May 12. About 88,200 gallons of oil were released from an underwater pipeline operated by Shell about 90 miles off the coast of Louisiana, according to news reports. Much of the oil has been recovered, and there are as yet no reported impacts on wildlife. But scientists are just beginning to assess the effects. 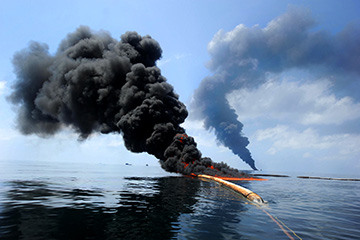 Dark clouds of smoke and fire emerge as oil burns during a controlled fire in the Gulf of Mexico, 6 May 2010. A new study found black carbon left from the burns joined a "dirty blizzard" of contaminants that eventually settled on the seafloor. Photo: U.S. Navy

“We knew oil pollutants can be carried downward by marine snow, but we didn’t expect the pollutants to stay in the water for such a long time,” said Beizhan Yan of the Lamont-Doherty Earth Observatory, an environmental chemist who is lead author of the study.

Some researchers have contended that contaminants found on the seafloor are coming from natural oil seeps. But Yan and colleagues used various “fingerprinting” techniques to confirm the hydrocarbons in the water were derived from crude oil of the kind leaking from the Deepwater Horizon site. The presence of barium and the distribution of olefin compounds, two key components in drilling mud, confirmed the contaminants were associated with the spill.

“It’s kind of like a smoking gun that pins down the source,” Yan said.

The study also sheds light on why these contaminants can stay so long—five months—in the water column. “The deposition of hydrocarbons was largely controlled by the particle sources, which are available sporadically,” Yan said. “Hydrocarbons, especially high molecular weight ones, were adsorbed tightly to fine particles. These fine particles can linger in the water column for weeks.” But a bloom of diatoms, microscopic marine plants, acted as a “dust bunny” to accumulate the particles and carry them below after the diatoms died, he said.

“Normally we don’t think of oil as sinking,” said co-author Uta Passow, a biological oceanographer at the Marine Science Institute at the University of California Santa Barbara. “People in the past have not really ever considered oil coming to the seafloor, especially very, very deep. We now know how the oil gets down there in large amounts and affects the communities that live there.”

Though it’s tough to measure exactly how much of the spilled oil winds up on the seafloor, Passow said it could be substantial. “I would argue it’s probably more than 10 percent, probably even more than 15 percent,” she said. That could add up to millions of gallons.

Other studies have documented how the oil and other contaminants dispersed, and have established that petroleum hydrocarbons from the spill have accumulated on the seafloor. Scientists also have known that phytoplankton, microscopic marine plants, play a role in delivering the oil to the seafloor. In the new study, the researchers describe how that happens.

The paper “provides a likely mechanism for the impact to deep sea corals discovered outside of the depth range and most likely flow path of the Deepwater plume of oil and gas that formed during the spill,” said Chuck Fisher, a marine biologist at Penn State who was not involved in the study. Fisher’s work documented damage to corals following the spill.

Between April 20 and July 15, 2010, about 200 million gallons of crude oil gushed into the Gulf of Mexico from a blown well beneath the Deepwater Horizon oil rig—the largest marine oil spill in U.S. history. Some of the oil was recovered, evaporated or was deliberately burned at the surface. Some washed ashore; still more was broken down by chemical dispersants and consumed by bacteria. But a large portion, perhaps a quarter, has been unaccounted for. Although the oil was undetectable in surface waters within a few weeks, the deeper environmental consequences were unclear because the mechanisms that transport petroleum hydrocarbons to the ocean floor were not well understood.

Yan and his colleagues used sediment traps to collect diatoms and other matter slowly sinking through the water and found contaminants clinging to the tiny particles, including black carbon left over from burning oil slicks, and barium and synthetic fibers of olefin, which are used in drilling mud. The researchers were “shocked” to find the barium Yan said, because it was assumed that the contaminant would settle quickly near application sites.

The team deployed a sediment trap roughly 4.5 miles from the capped well and captured sinking material from August 2010 to October 2011. According to the researchers, the black carbon continued to sink for two months after the oil fires were extinguished, while other contaminants, including barium, accumulated for at least five months.

“The traps collected this material months after everyone thought the leak was over,” Passow said. “The material stays in the water much longer than people think.” And because drilling mud and oil are present whenever drilling is going on, contaminants could be winding up on the bottom in other situations, as well, she said.

“Considering the widespread use of drilling mud at hundreds of ocean drilling sites around the world, the environmental implications of such an unexpectedly long residence time of barium in the water column is significant and worthy of further investigation,” the paper’s authors write.

The researchers found that the movement of contaminants from the water column to the seafloor was intensified during August and September 2010 by an exceptionally large bloom of diatoms. These phytoplankton produce a mucous, particularly when dying, that acts as a glue for other particles in the water. As this “marine snow” sank, it carried the contaminants from the oil spill to the seafloor.

It’s unclear whether the oil itself played a role in precipitating the diatom bloom. A study earlier this year by another Lamont researcher, Ajit Subramaniam, found phytoplankton thriving above natural oil seeps in the Gulf. While the oil itself doesn’t seem to help the phytoplankton, turbulence from the seeps brings nutrients up from the deep that do.

Subramaniam said that water management authorities increased discharge of the Mississippi River to push the Deepwater Horizon oil plume away from the shore, and that may have pushed nutrients out into the Gulf that could have fueled the diatom bloom.

“There were people out there measuring hydrocarbons,” Subramaniam said. But they didn’t find any in the water, and “by August-September, the word on the street is the show’s over, we can all go home.” But the new study “shows they just weren’t looking for the right things.”

The study may prove helpful in planning future responses to spills, how to measure their impact, and how to contain damage to the environment and associated food systems and ensure food safety. Yan said the team is currently studying what happens to the oil seeping naturally in the Gulf through the Ecosystem Impacts of Oil and Gas Inputs to the Gulf project.