Distilling Art from the Figures of Science 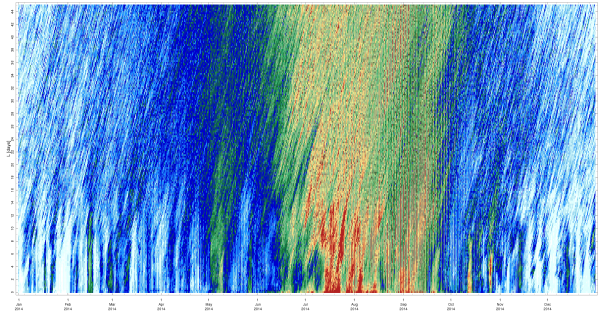 An illustration by Michael Tippett of the strong seasonal signal of the Indian Monsoon. Each of the 262,800 pixels is a forecast of all-India rainfall made by the NOAA Climate Forecast System in 2014. The horizontal axis indicates the time at which the forecast is valid, and the vertical axis shows how many days in advance the forecast was made.

Any researcher can attest to the fact that a scientific figure is worth more than a thousand words. A single figure can encompass years of work: arduous treks across the open ocean or to the far corners of the earth, hours toiling in the lab, more hours fussing in front of Adobe Illustrator. Those figures are the backbones of scientific publications, they’re projected on big screens at conferences and dissected at journal clubs, but rarely do we take a step back to consider the inherent artistry in the figures created to convey the science.
The Research as Art exhibit at the Lamont Doherty Earth Observatory invites the community to do just that. This annual event is organized by Columbia Department of Earth and Environmental Science graduate students Hannah Rabinowitz, Colin Raymond, Maayan Yehudai and myself and calls upon the Lamont Community to submit their finest figures to be blown up, mounted, framed and presented as works of art in a gallery-like setting. The gallery was unveiled May 8 during a special exhibition.
The showcased figures include a hauntingly beautiful black and white photo of lava flow from the Pahoehoe volcano in Hawaii by Einat Lev, an assistant research professor in the Seismology, Geodynamics and Tectonics division at Lamont. Another popular piece was a radar cross section of the Greenland ice sheet by graduate student Michael Wolovick. Displayed in proportions larger than would ever be possible in a publication, the complexity of this ancient formation is revealed.
The artful research on display was not limited to framed images. There was also a video installation by Lamont associate research professor Ben Holtzman that featured an animated video of the succession of earth quakes in Nepal that culminated with the devastating earthquake of last month.
Michael Tippett, a senior research scientist at the International Research Institute for Climate and Society, submitted a figure depicting the predictability of the Indian Monsoon generated with data from the NOAA Climate Forecast System in 2014. As a scientific tool, the figure is a striking example of our ability model major climate events. Presented as a work of art, however, the image calls to mind the pummeling rain showers it represents, and looks strikingly similar to a Van Gogh painting.

This is a cross-section through the Greenland ice sheet collected with airborne ice-penetrating radar. The radar echogram is displayed as a 3D surface illuminated from above, creating the illusion of texture and emphasizing the layered internal structure of the ice sheet. Composition by Michael Wolovick.

In addition to appreciating the beauty in the work created by Lamont scientists, the exhibit also showcased the diversity and range of the research conducted at the observatory, as well as the importance and power of communicating research about the natural world and the climate to the broader public. The exhibit remains on display in the Lamont Café.