Under the shopping malls and highways of suburbia, there might one day be a partial fix for global warming. Since August, engineers have been drilling just west of the Tappan Zee Bridge to collect samples of rock from the Newark Basin , an ancient rock formation stretching beneath New York, New Jersey and Pennsylvania. As they drill, they will pass through layers of sandstone, solidified magma and metamorphic basement rock. Researchers at Columbia’s Lamont-Doherty Earth Observatory and its partner institutions are looking for cracks and pores just below the solidified magma layer that might be suitable for storing injected carbon dioxide to stabilize earth’s warming climate.

Just after Labor Day, project organizers opened the drill site to journalists and spoke about the work. “The Newark Basin is of special interest because it underlies a densely developed region,” said John Conrad, whose environmental consulting firm, Conrad Geoscience, is leading the project with Sandia Technologies. “It makes sense economically and environmentally to permanently store the CO2 near carbon sources such as power plants and large manufacturing facilities.”

Visible from the New York State Thruway, the drill rig sits in a parking lot off Exit 14 in Clarkstown, Rockland County, in the shadow of an arts and crafts supply store. Except during Hurricane Irene, when the rig was hastily disassembled for safety, drilling has been nearly continuous since mid-August. The drill has tunneled through 4,000 feet of rock so far, and in the next week is expected to hit the Palisade sill , the solidified layer of magma, or diabase, at 6,000 feet, formed about 200 million years ago as Africa and North America began to rip apart.  By the end of September, drillers expect to reach 8,000 feet, going back 230 million years in time. In addition to looking for pore space that might be used to store CO2, researchers are also investigating whether the diabase layer might serve as a lid to keep carbon dioxide from escaping back into the atmosphere.

At key intervals, cylinders of rock will be removed from the hole and brought to Lamont-Doherty for analysis. In the early 1990s, Lamont scientists Paul Olsen , Dennis Kent and David Goldberg were involved in drilling the southern Newark Basin for rock samples, uncovering much of what is known today about the formation. The borehole off Exit 14 is a window into the past, Olsen said at the public forum this week ; he sees it as a chance not only to study carbon storage, but to collect evidence of past climate and learn more about the period of mass extinctions that led to the rise of the dinosaurs. 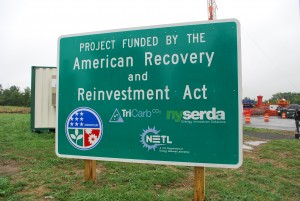