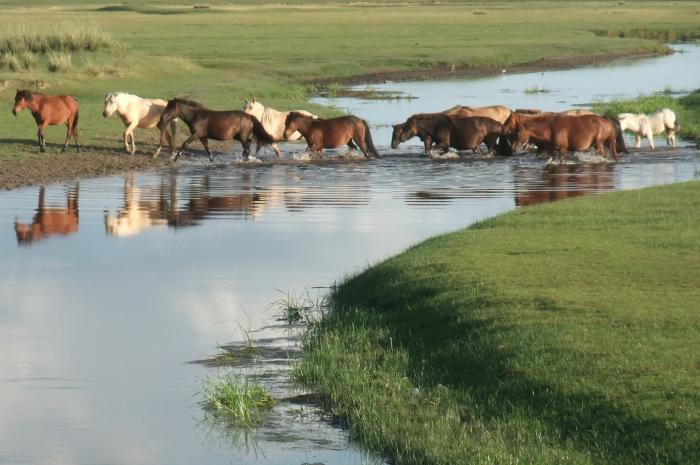 The annual summer monsoon that drops rain onto East Asia, an area with about a billion people, has shifted dramatically in the distant past, at times moving northward by as much as 400 kilometers and doubling rainfall in that northern reach. The monsoon’s changes over the past 10,000 years likely altered the course of early human cultures in China, say the authors of a new study.

Researchers from the Lamont-Doherty Earth Observatory and the Chinese Academy of Sciences in Xi'an studied ancient water levels for Lake Dali, a closed-basin lake in Inner Mongolia in the northeast of China. They found that the lake was six times larger and water levels were 60 meters higher than present during the early and middle Holocene—the period beginning about 11,700 years ago, and encompassing the development of human civilization. 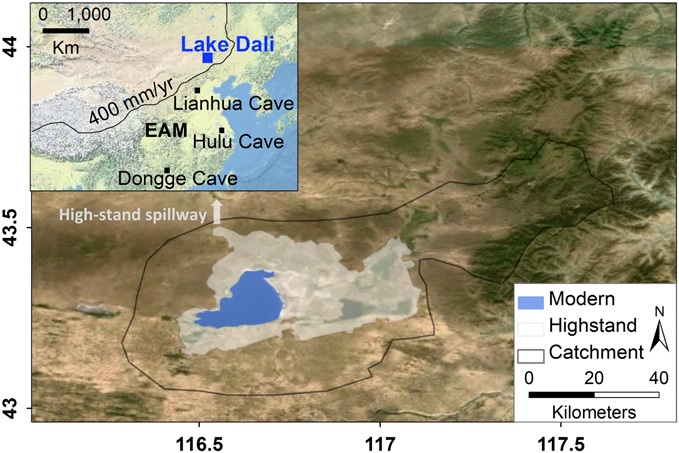 The study, appearing this week in the Proceedings of the National Academy of Sciences, also ties the shifting monsoon to changes in the earth’s orbit and other periodic changes in the climate system. The study should help scientists understand how the monsoon is affected by those natural cycles, and how a changing climate today might influence the monsoon in the future.

Goldsmith said it’s still unclear how the monsoon will react to global warming. One view is that the monsoon should grow stronger, but the area studied has been drying out over recent decades, he said, “so there is still a lot that needs to be done in that region before we can get definitive answers.”

Dali Lake is located near the northwestern limit of the East Asian monsoon, and so would reflect the changes brought about when the monsoon shifted north. The researchers studied outcrops of sediments left behind when the lake was far larger, and used those and other markers to construct a timeline of lake levels, and the fluctuation of rainfall over millennia.

They found that the lake reached peak levels around 123,000 years ago, again around 58,000 years ago, and once more between 11,000 and 5,500 years ago. They tie the periodic increases in rainfall to the range of the monsoon shifting north by as much as 400 kilometers. The lake record is "highly correlated" with measurements taken earlier from cave deposits in both northern and southern China. 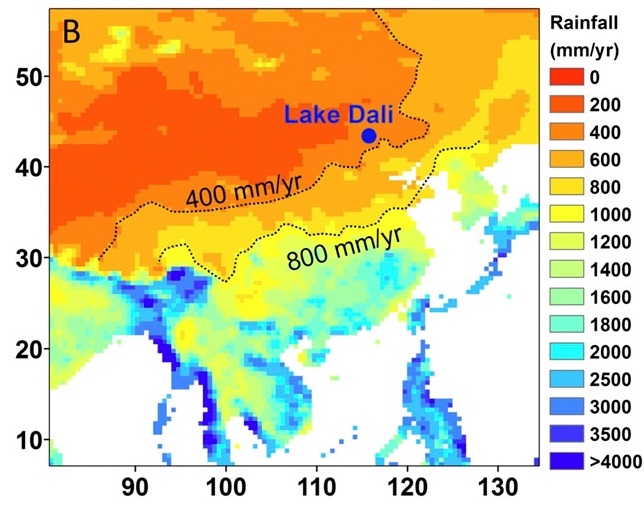 Between 5,500 and 5,000 years ago, the monsoon weakened and rainfall over northern China decreased by 50 percent, the researchers found. They speculate that this drying triggered a major cultural transition in the region. As they describe it, two early Neolithic societies, the Hongshan culture in North China and the Yangshao culture in central China, collapsed around 5,000 years ago. In central China, the following period saw the rise of more stratified and socially and politically complex societies, including the Longshan culture. Previously unoccupied areas on the eastern margin of the Tibetan plateau were populated. Meanwhile, northeast China experienced a sharp population decline, represented by the Xiaoheyan culture.

“These findings show that climate change can have dramatic effects on human societies and highlight the necessity to understand the effect of global warming on rainfall patterns in China and all over the world,” the authors write.

Intense variations in rainfall may have played a role in the collapse of other civilizations. A study led by Lamont scientist Brendan Buckley, published several years ago, suggested that extended drought coupled with changes in the monsoon could have doomed Cambodia’s ancient Khmer civilization at Angkor nearly 600 years ago. Drought is thought to have played a role in the decline of the Classic Maya civilization, too, though in that case, another Lamont study suggests that the Maya themselves contributed to the drought by clearing forests for cities and crops.

The Lake Dali paper’s other authors are Wallace S. Broecker, Pratigya J. Polissar and Peter B. deMenocal of Lamont-Doherty; Hai Xu, Jianghu Lan, Peng Cheng, Weijian Zhou and Zhisheng An of the State Key Laboratory of Loess and Quaternary Geology, Institute of Earth Environment, Chinese Academy of Sciences; and Naomi Porat of the Geological Survey of Israel.