An Ecological Traffic Jam in the Warming Tropics? 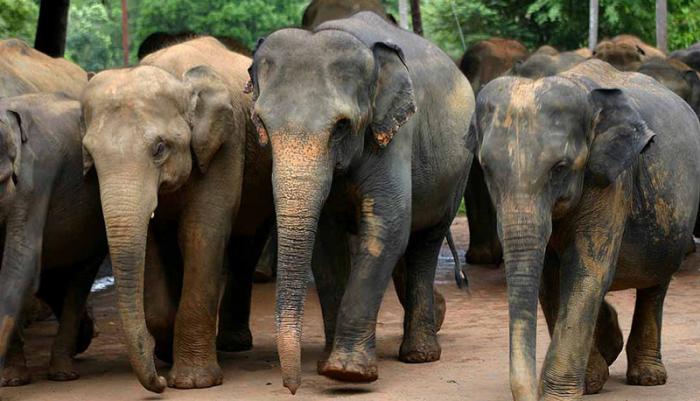 Asian elephants, like these in Sri Lanka, are sensitive to temperature. A new study explores how far plant and animal populations would have to migrate to maintain their environment's current average temperature in a world 2°C warmer. Photo: Amila Tennakoon, CC-BY-2.0

The tropics are already hot, and they’re getting hotter as global temperatures rise. A new study in the journal Scientific Reports offers a glimpse into just how severely a couple more degrees could disrupt the region’s ecological map.

The authors, from Columbia University’s Lamont-Doherty Earth Observatory and the University of California, Berkeley, looked at potential effects of a 2°C rise in the average global temperature this century and asked: what would happen if all species tried to migrate to keep their average environmental temperature unchanged?

It’s an intentionally simplified approached to a complex question – many variables go into how living things respond to rising temperatures, and migration is just one reaction – but the approach provides an important lesson about some of the risks that rising global temperatures are creating in the tropics.

In the mid-latitudes, including the United States, temperatures vary over short distances. The study finds that populations of animals and plants there would each shift poleward at roughly the same rate, leaving population densities largely unchanged, under the study’s scenario.

In the tropics, however, temperatures are more uniform because of the region’s atmospheric dynamics. Moving to cooler climes there often means traveling hundreds of kilometers. Under the study’s simplified migration scenario, in which all species migrate to keep their average environmental temperature, a 2°C temperature rise would lead to an almost complete evacuation of the equatorial band and a rush to the tropical margins, where population densities would increase 400 percent over their initial concentrations. This would take place both on land and in the oceans. For species on land, migrating toward the tropical margins also means moving into drier regions, posing additional challenges.

“If populations were actually to concentrate this quickly in what are already exceptionally arid environments, we would expect there to be many adverse consequences in both the natural and human systems, such as accelerated transmission of infectious disease of conflict over scarce resources,” write author Solomon Hsiang, an associate professor of public policy at Berkeley, and co-author Adam Sobel, a professor at Columbia’s Lamont-Doherty Earth Observatory and School of Engineering.

Logarithm of the minimum distance in kilometers that an organism would have to travel to maintain the average temperature of its environment in a world 2°C warmer. From Hsiang and Sobel, 2016

Of course, many other variables go into species’ responses to climate change. Some are able to adapt to survive warmer conditions; other populations die out as food sources disappear or moisture levels changes. This study examined just one response to highlight high-risk regions and the challenges created by widespread species migration.

"This is another piece of information that points to vulnerability of the tropics,” Sobel said.  “We're not making any specific predictions about migration patterns of real species, but the geophysical constraint is that, as the tropics get hotter, you'll have to go far, essentially leaving the tropics, to cool off."

Some species have already started to shift their ranges as temperatures and environmental conditions change. For humans, dwindling water supplies and rising sea levels have both driven migration. In the Marshall Islands and Isle de Jean Charles, Louisiana, for example, human populations are considering resettlement as sea level rises.