End of the Fieldwork and Mandalay Hill 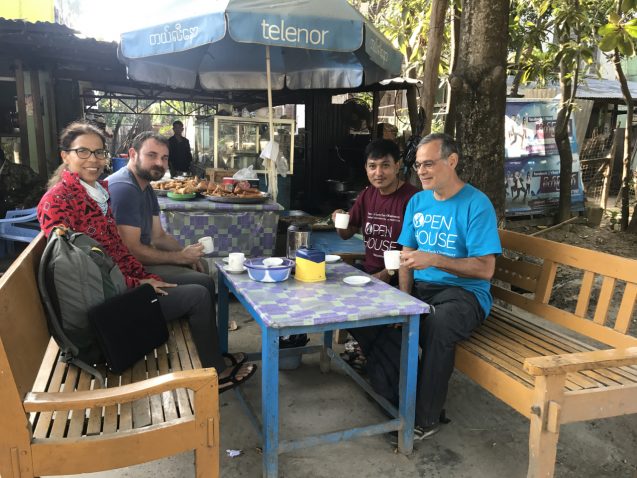 I was able to go into the field with the seismologists one last time before moving on to Mandalay and Yangon. Eric’s team was going to move on to the next base at Konbalu, so I would have to go with one of the other teams. I decided to base my choice on the likelihood of getting food and perhaps coffee. Eric tends to work without eating all day, so forgets about food for others. After questioning the teams, I decided to go with Mike, Anna and Oo Than. However, when the schedule of my trip to

Mandalay switched from the next morning to that night, Eric thought I’d better go with Patricia, Derick and Tun Minn Oo. He was concerned that drive for the other team might be too long for me to get back in time for my ride.

Once again the teams started out at 6 am. The most direct route turned out to have bad roads cutting our speed as we swerved around potholes and bounced over the uneven roadway. We still got to the area so early enough that we were able to stop for coffee. I think the extra time to get coffee is more than made up for by our being able to work faster. With a little hunting, we found the monastery, met the monks and were shown were the seismometer would go. We walked around a bit and decided on the exact location of the sensor, box and solar panel. We unloaded the car and Derick started marking out the location for the hole. We learned that we had 4 laborers for the digging.  They did an extremely careful job of making a nice straight- sided hole of the correct depth. While they did, I took the opportunity to eat my breakfast of fried rice with an egg, then went to work on setting up the solar panel. Tun Minn and I used the sledge to hammer in the two tripods of rebar and used zip ties to secure them and attach the panel. The GPS was attached to one of the rods. Meanwhile, the box was set up. When I started to make a trench for the cables to be buried in, the laborers took over and dug a better one. With the laborers digging the hole, I had time to explore and photograph the monastery’s pagodas, and play with the kids and others who had come to watch. When the 3-foot deep hole was finally done, Tun Minn and I mixed the cement for the pad. Since the ground was mainly mud, we mixed two batches to make it extra thick. When we finshed getting the sensor set up and covered with its protecting foam and fiberglass, it was time to lay down the metal cover, the tarp and shovel the dirt over the top. The laborers took over, making sure every last bit of mud was shoveled back and making a neat job of it. They had a lot of integrity and refused to take more than a ridiculously small payment for the work. When the work was done we took off our shoes and met with the monk. He gave us tea and some snacks to eat at a low table. When I noticed has wasn’t eating I asked him about it. Monks do not eat after noon. It was 12:04. They eat breakfast and a brunch around 11:30, then fast the rest of the day. For the way back, I suggested a longer route that I knew had good roads. We were back around 2. We started to go for lunch, but none of us were very hungry to we went to a coffee shop for coffee and naan. The other group joined us there about 3:30. So much for Eric’s driving estimates. Furthermore, after they completed their installation and met with the monks, they were invited to lunch in the home of the local council chairman. They got a real home-cooked Myanmar meal. My first choice to go with Mike, Anna and Oo Than was right. We made up for it that evening. It was my last day, so after loading the trucks and showering, we went out to a nice restaurant for a great meal. When we got back, I left on a 2-hour taxi ride to Yangon. I had breakfast in the morning with Soe Thura Tun and Myo Thant. Soe was part of the initial 2014 meeting in Aizawl, India where we developed this project. He is not taking direct part because he was elected to their parliament, the Hluttaw, in 2015. He and Myo Thant, vice chairman of the Myanmar Earthquake Committee, were in Mandalay to lead a university field trip along the Sagaing Fault. It is a large strike-slip fault, similar to the San Andreas Fault. Here the Irrawaddy River runs along the fault. Soe and I have been trying to meet during this trip, but he was in Yangon when I was in Nay Pyi Taw and now he will be in Nay Pyi Taw while I am in Yangon. Luckily we were able to briefly cross paths in Mandalay.

I now had the unusual prospect of a free day before flying to Yangon to attend a conference. After resting and catching up on work and sleep in the morning, I headed out to Mandalay Hill. At 790 feet, it towers over the city. I started by visiting the Kuthodaw Pagoda at its base. It houses the world’s largest book. The text is the Tripitaka, the entire Pali Canon of the Theravada branch of Buddhism practiced in Myanmar. It is written on 729 stone tablets (both sides), each housed in a stupa. It was built in 1860-1862 by King Mindon after he founded Mandalay as the last royal capital of Burma. The British conquered lower Burma in 1823 and took the rest of Burma in 1885.

I stopped for lunch as a nearby restaurant then continued to the spectactular Kyauk Taw Gyi Pagoda. The center of the pagoda is a giant marble statue of the Buddha. It took 10-12,000 men to transport the marble block here to be carved. The pagoda grounds contain rows and rows of statues of the Buddha, supplicants, demons and other figures from Buddhism. I skipped the enormous palace grounds surrounded by a moat nearby. Most of the buildings were destroyed by the Japanese during World War II and replicas are still being built.

It was time to begin the long climb up Mandalay Hill. The covered walkway has multiple pagodas along the way and benches along the sides for resting. It is 1729 steps to the top. With a rest in the middle and examining all the pagodas and shops along the way, it took me an hour and I was sweating like I had just dug a seismometer hole in the heat. The views at the top were as great as advertised. Given the exertion of getting up here, I decided to linger. I sat down and read a book for a while. When I looked up, the summit was now crowded with people. Everyone had showed up to watch the sunset. Enlarging the crowd was a group of 30-40 monks and students learning English. They come up here for 3 hours every two weeks to practice English with the tourists. It is the best spot to find them. I spent time talking to a number of them, before I walked down with a group of monks and another tourist. We were some of the last to leave. A nice ending for the fieldwork part of this trip.

I now fly to Yangon in the Irrawaddy Delta in the south of the country. At 5 million people, it is by far the most populous city in Myanmar. Here I will spend several days attending a conference about the geology and hydrocarbon exploration in Myanmar before flying home. It has been a long but satisfying trip. In a few years (with a lot of work), we will have a much better understanding of the structure of this region and its earthquake hazard.