On the Eve of Earth Day, A Live Discussion About the Consequential Decade Ahead 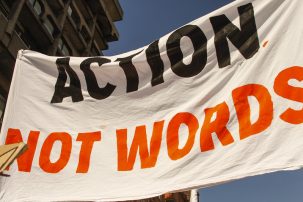 A sign from a climate march in 2014. Photo: Open Minder/Flickr

When President Biden took office in January, he set a goal of making the U.S. carbon neutral by 2050. This will require steeper emissions cuts than the U.S. has ever achieved — a tall order, but the stakes are exceedingly high. Scientists warn the next decade will be crucial for taking powerful action to stem catastrophic climate impacts.

“This is a problem like no other,” said Alex Halliday, founding dean of the newly launched Columbia Climate School and director of the Earth Institute. “Climate is a problem where we need to effect real change in the world very, very quickly.”

“This is a problem we’ve created as the human race, and I know there’s a lot of passion and commitment to do whatever we can to find solutions,” said Maureen Raymo, co-founding dean of the Columbia Climate School and director of Lamont-Doherty Earth Observatory.

John Kerry, the special presidential envoy for climate, doesn’t mince words about the urgent need for climate action. His remarks earlier this week at a media roundtable in Seoul, Korea, outlined the big changes that are needed to transition to a new energy economy and more sustainable practices.

“The climate crisis — and it is a crisis — is growing. We all need to do more. Every country,” said Kerry. “We are looking at the greatest economic transition since the Industrial Revolution. And we need corporations, manufacturers, technologies… all have to be at the table, because this is not something any one entity or one country can resolve. It requires major multilateral efforts, and every aspect of society needs to join in.”

In the context of this high-stakes need for immediate action, Halliday and Raymo will discuss the scientific evidence outlining global climate risk and Columbia’s strengthened approach to issues of climate and sustainability.

The live discussion, The Climate Imperative: Meeting the Moment, which begins at April 21 at 6 pm EDT, will be moderated by CBS News meteorologist and climate specialist Jeff Berardelli. RSVP here.