The undersea Corinth rift, in the Gulf of Corinth in Central Greece, is one of the most seismically active areas in Europe. Here, one of the earth’s tectonic plates is being ripped apart, causing geological hazards including earthquakes. Starting this month, the rift will be the focus of a cruise under the auspices of the International Ocean Discovery Program (IODP).

Co-chief scientist Donna Shillington, a seismologist at Columbia University’s Lamont-Doherty Earth Observatory, said, “This expedition will provide key missing information on the timing and rates of fault activity in the Corinth rift. Not only is this information very important for understanding faulting and hazards in this rift zone; it will also help us understand other active and ancient rift zones around the world.”

Continental rifting—when two tectonic plates are pulled apart—is fundamental for the formation of new ocean basins. These zones, when active, are dynamic regions of high hazard potential. Geologically, the Corinth rift is a very young feature, having formed in the last 5 million years. The main rift today is situated across a marine basin. Its high rates of activity, closed drainage system, and high sedimentation rates make it ideal for examining early rift development and how the landscape responds, said Shillington. The overall aim is to study the rifting process by drilling for sediment cores and recovering data on the properties of the borehole materials. 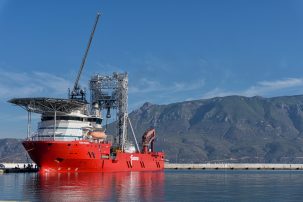 An international team of scientists aboard the drilling ship Fugro Synergy will collect cores at three different locations, penetrating as far as 750 meters below the seabed. The expedition will last about eight weeks.

Co-chief scientist Lisa McNeill of the University of Southampton said that researchers have been working in the region for many decades, examining sediments and active fault traces exposed on land, and using marine geophysics to image the basin and structures below the seafloor. Still, she said, there is very little information about the age of the sediments and of the environment of the rift in the last 1 to 2 million years. “By drilling, we hope to find this last piece of the jigsaw puzzle. It will help us to unravel the sequence of events as the rift has evolved and, importantly, how fast the faults, which regularly generate damaging earthquakes, are slipping,” she said.

The research is also expected to help scientists map out the climate in the eastern Mediterranean and the environment of the rift basin over the last 1 to 2 million years.

A total of 33 scientists will participate, coming from Australia, Brazil, China, France, Germany, Greece, India, Norway, Spain, the United Kingdom and the United States. Nine of them will sail onboard the ship. In February 2018, the whole team will meet at the IODP core repository at the University of Bremen, Germany, to split, analyze and sample the cores.

The expedition is being conducted by the European Consortium for Ocean Research Drilling, as part of the IODP. The IODP is an international marine research program supported by 23 countries, which explores earth’s history and structure as recorded in seafloor sediments and rocks. It also monitors sub-seafloor environments.