News Subtitle:
‘It’s like being in a raft in the Grand Canyon looking up’

Along the walls of Oceanographer Canyon, fish dart in and out of colorful anemone gardens and sea creatures send up plumes of sand and mud as they burrow. Bill Ryan, an oceanographer at Columbia University’s Lamont-Doherty Earth Observatory, watched the scenes through the windows of a mini research submarine in 1978 as he became one of the few people to explore the seafloor canyons that President Obama has now designated a national monument.

Ryan traveled more than a mile below the ocean surface to take samples in an effort to determine the geological history of the canyons in Georges Bank, a section of the continental slope off New England that has been home to some of the Atlantic Ocean’s most productive fisheries.

In the audio interview above, he talks about what he and his team saw and learned as they explored the canyons aboard the research submersible Alvin. Their findings led to breakthroughs in our understanding of the region’s petroleum potential and how continental margins form when continents split apart.

“When you’re down in these canyons with 6,000 to 9,000 feet of relief, underwater, it’s like being in a raft in the Grand Canyon looking up,” Ryan recalled. “We would fly with the Alvin through these gorgeous gardens but rarely see an outcrop of bedrock, which we wanted to sample because that could tell us about the age of the canyons.” 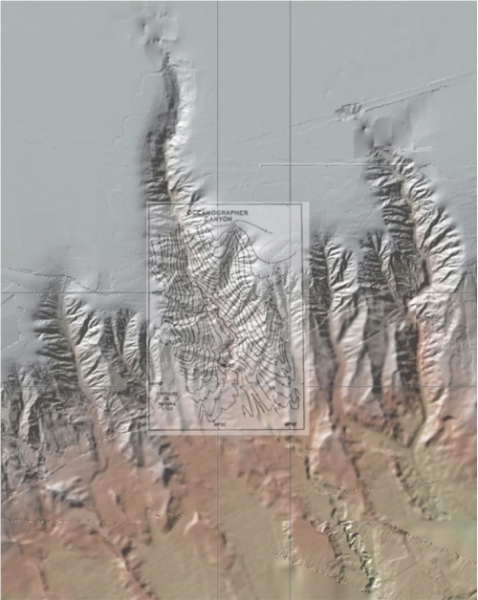 The trick to studying the rock layers, he learned from European colleagues who study terrestrial canyons to learn about the formation of mountain chains, was to follow the river at the bottom of the canyon.

In previous expeditions funded by the U.S. Navy, Lamont’s Bruce Heezen had discovered how tidal currents flow through the canyons, almost like rivers, pumping nutrients from the deep ocean up through the canyons to feed the fisheries of Georges Bank. Following the canyon floor was a torturous route, but that tidal current had kept sediment from building up, revealing the layers of sandstones, siltstones and chalk that Ryan was looking for.

“In sampling those and looking at the fossils within them, we realized that we were back 120 million years and traversing up through time with a complete geological history of the evolution of Georges Bank all there, just like you see all the layers at the edge of the Grand Canyon,” Ryan said.

Clinging to the hard rocks were vibrant corals that have since provided more clues to the history of the region. The deep-sea corals live for hundreds of years and record in their annual growth rings changes in temperature and salinity of the deep, abyssal ocean, creating a rare and valuable record.

“The corals were beautifully colored – brilliant red, orange, yellow, and they were attached to the hard rocks and most abundant under the overhang of ledges,” Ryan recalled. “They’re very fragile. If there was any significant dredging within the canyons, they would be ripped up and destroyed.”

The three canyons that are part of the new, 4,913-square-mile Northeast Canyons and Seamounts Marine National Monument had been mapped in the early 20th century by the U.S. Coast and Geodetic Survey, but Ryan’s close-up view from the highly maneuverable mini sub revealed a far more intricate landscape with many gullies, similar to canyons on land.

The canyons, which the team realized had formed underwater, have been undergoing constant erosion caused by the tidal currents, sediments sweeping down the gullies, avalanches, freshwater from aquifers seeping through porous layers of rock, and also by marine life itself, Ryan said. 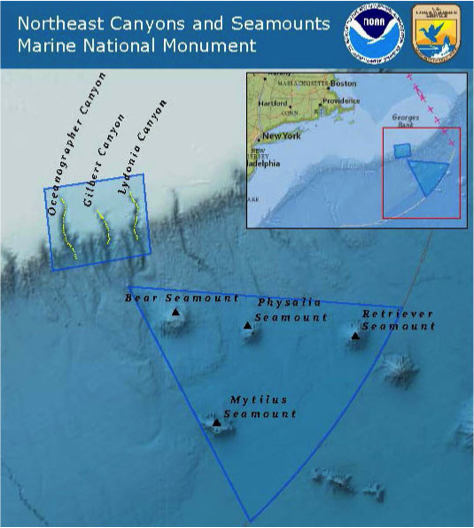 “One of the things we see looking out the window of the Alvin as you’re into an outcrop or on a muddy field or going through anemone gardens, are creatures coming out of the sediment, spouting  sand and mud into the air because of what they’ve burrowed. You see fish diving in to eat these creatures. They make a splash and mud comes up into a cloud and the mud cloud drifts down slope, so it’s a constant biological erosion taking place,” Ryan said. “From time to time, an older canyon gets filled up and then it starts to erode again. So it’s a complex history of cut and fill, cut and fill.”

The team’s geologic history of the canyons also provided new knowledge about the region’s oil potential.

This was around the time of the oil crises, and the federal government had approved some commercial oil exploration in the region. If the sediment had built up at about the same rate over time, potentially carbon-rich, 60-80 million-year-old deltas could have matured into oil and gas. That wasn’t what Ryan’s team found, however. The scientists discovered that the continental shelf at the canyons they explored had been subsiding much faster millions of years ago and that its sinking and the sediment build-up had slowed through time.

“This cretaceous formation was far too shallow to ever have been heated into petroleum, and that whole stage of early exploration was a wipe out,” Ryan said. “Three days of diving in one of these canyons put together a picture of Georges Bank that then when drilled was found to be the same.” 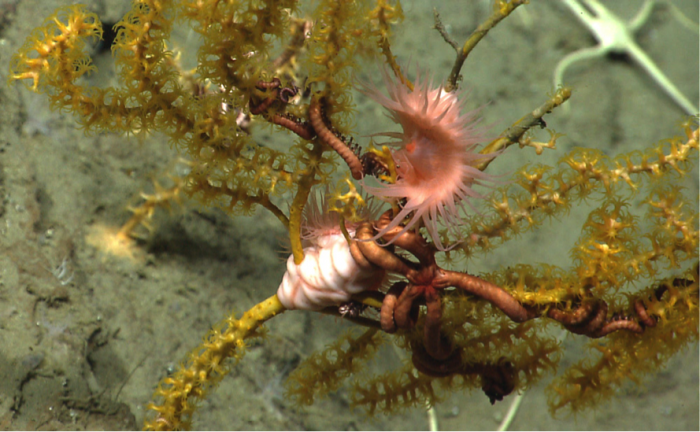