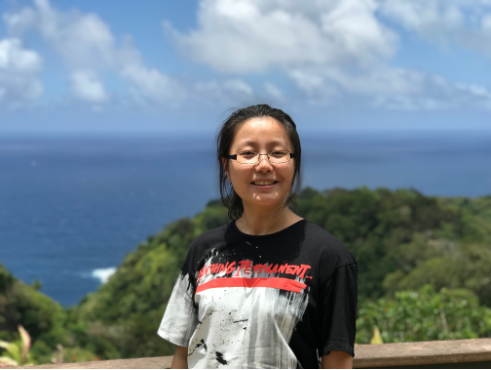 Wu started in mathematics before heading to Lamont and focusing on climate research in 2017.

Yutian Wu is an associate research professor at Lamont-Doherty Earth Observatory in the Columbia Climate School. She is a climate scientist whose work focuses on large-scale atmospheric circulation changes with regards to climate change. Wu’s current research looks at the Asian summer monsoon, mid-latitude storm tracks, jet streams, and atmospheric blocking that is associated with extreme weather events. Her most recent work emphasizes the causes and effects of Arctic sea ice loss. Outside of her work, Wu enjoys the sense of family among the staff at Lamont when eating lunches together as well as picnicking with her own family.

Wu completed a bachelor’s degree in condensed matter physics. When looking to apply to graduate schools in the United States, Wu realized that she wanted her research to have more real-world applications. She then decided to focus on climate science, as climate change and atmospheric circulations affect everyone’s daily lives.

Wu received her Ph.D in applied mathematics from Columbia University in 2011. She then completed a postdoctoral research associate at New York University’s Courant Institute of Mathematical Sciences followed by a stint at Purdue University as an assistant professor in the Department of Earth, Atmospheric, and Planetary Sciences. She then came back to her roots at Lamont-Doherty in 2017 and has been working there ever since.

Wu’s current project focuses on Arctic sea ice. She is looking into the dynamical process—known as moisture intrusion—that leads to Arctic sea ice melting as well as the potential impacts of that melting ice on atmospheric circulations. Moisture intrusion involves storm activities that bring warm and moist air from the middle latitudes to the polar regions. Wu explains that it is this moist air that causes warming in the polar regions and amplifies melting.

Wu harnessed this research experience to teach the Climatology course this past summer for the Master of Public Administration in Environmental Science and Policy Program (MPA-ESP). This course serves as an introduction to how Earth’s climate system functions and how humans impact that system.

Climate processes, Wu believes, are important for all people to understand. Especially for ESP students, integrating fundamental climate science can help them better understand and more effectively address the climate crisis. If students want to learn more technical skills about climate change modeling, they can enroll in her elective course in the fall semester named Climate Science for Decision Making and Modeling Analysis and Applications.

Wu thinks the ESP program is great for students because it integrates science with policy and management. And the intensive summer curriculum, specifically the Climatology class, builds a solid base for students heading into it. Wu felt very motivated after teaching the summer course, she said. She was impressed by the quality and quantity of questions students had as well as the level of excitement surrounding climate science in general.

Taylor Goto is an alum of the Climate and Society program, Class of 2021.

If you’re interested in learning more about the MPA-ESP program, please contact the assistant director, Stephanie Hoyt (sah2239@columbia.edu) or attend one of our upcoming information sessions.