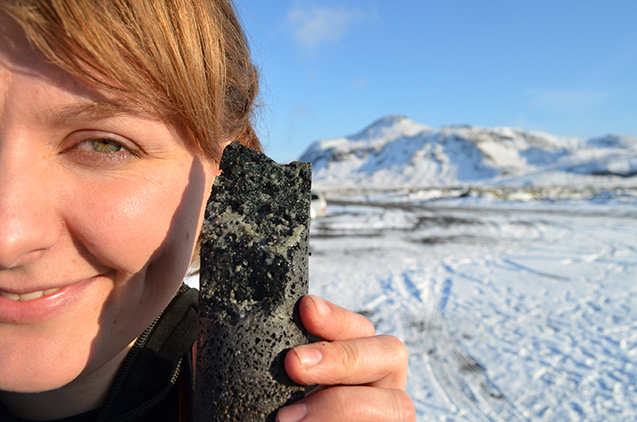 Scientists and engineers working at a major power plant in Iceland have shown for the first time that carbon dioxide emissions can be pumped into the earth and changed chemically to a solid within months—radically faster than anyone had predicted. The finding may help address a fear that so far has plagued the idea of capturing and storing CO2 underground: that emissions could seep back into the air or even explode out. A study describing the method appears this week in the journal Science.

The Hellisheidi power plant is the world’s largest geothermal facility; it and a companion plant provide the energy for Iceland’s capital, Reykjavik, plus power for industry, by pumping up volcanically heated water to run turbines. But the process is not completely clean; it also brings up volcanic gases, including carbon dioxide and nasty-smelling hydrogen sulfide.

Under a pilot project called Carbfix, started in 2012, the plant began mixing the gases with the water pumped from below and reinjecting the solution into the volcanic basalt below. In nature, when basalt is exposed to carbon dioxide and water, a series of natural chemical reactions takes place, and the carbon precipitates out into a whitish, chalky mineral. But no one knew how fast this might happen if the process were harnessed for carbon storage. Previous studies have estimated that in most rocks, it would take hundreds or even thousands of years. In the basalt below Hellisheidi, 95 percent of the injected carbon was solidified within less than two years. 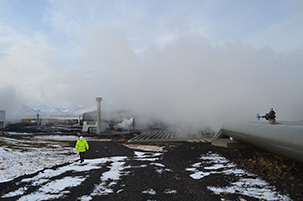 Iceland's Hellisheidi geothermal power plant is the world's largest. It is cleaner than those run on fossil fuels, but still emits carbon dioxide by venting volcanic gases.

“This means that we can pump down large amounts of CO2 and store it in a very safe way over a very short period of time,” said study co-author Martin Stute, a hydrologist at Columbia University’s Lamont-Doherty Earth Observatory and professor of environmental science at Barnard College. “In the future, we could think of using this for power plants in places where there’s a lot of basalt—and there are many such places.” Basically all the world’s seafloors are made of the porous, blackish rock, as are about 10 percent of continental rocks.

Scientists have been tussling for years with the idea of so-called carbon capture and sequestration; the 2014 report of the Intergovernmental Panel on Climate Change suggests that without such technology, it may not be possible to limit global warming adequately. But up to now, projects have made little progress. It has been tried at only a handful of sites, and most experiments have involved pumping pure carbon dioxide into sandstone, or deep, salty aquifers. Here, it is hoped, pressure and solid layers of caprock above would seal in the waste. But scientists have worried that any miscalculation could result in emissions making their way back up through fractures, or that natural earthquakes or tremors caused by the injection itself could rupture subterranean reservoirs. A coal-fired power plant in Saskatchewan that currently runs North America’s only large-scale operation at a generating station has been plagued by technical problems--and the captured carbon dioxide is being sent to oil producers who inject it into ailing wells to pressure out more oil, which produces more carbon dioxide when burned.

In 2007 Hellisheidi’s operator, Reykjavik Energy, joined with a consortium including Columbia and the universities of Copenhagen and Iceland to get rid of its CO2 emissions, along with the hydrogen sulfide, which was plaguing the area. The plant produces 40,000 tons of CO2 a year—5 percent the emissions of an equivalent coal-fired plant, but still considerable.  Lab experiments showed that, unlike the sedimentary rocks that most other projects have used for injection, the local basalt contains plenty of calcium, iron and magnesium, which are needed to precipitate out carbon. Experiments showed that large amounts of water would also have to be added to make the reaction go—another departure from previous projects, which have just pumped down pure carbon dioxide. 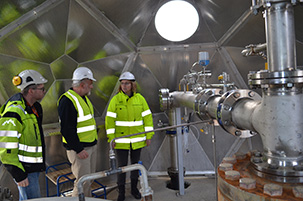 In a 2012-2013 pilot, the team piped 250 tons of CO2 mixed with water and hydrogen sulfide down 400 to 800 meters, then monitored the formation’s chemistry through a series of wells. Fast-changing compositions of carbon isotopes in water samples, initially reported in 2014, signaled that much of the carbon had mineralized within months. The new Science paper lays out the evidence conclusively.

Edda Aradottir, who heads the project for Reykjavik Energy, initially estimated the solidification process might take 8 to 12 years—much faster than previous studies had indicated. “People said there was very little truth to that—they thought it couldn’t happen that fast,” she said. “Then, it happened much faster. It was a very welcome surprise.” Cores drilled from the injected area show the rock is heavily laced with whitish carbonate veins, apparently produced by the process. With initial signs of success, in 2014 Reyjavik Energy started injecting carbon dioxide at the rate of 5,000 tons per year. Ongoing monitoring indicates that mineralization has kept pace, said Aradottir. This summer, the company plans to double the injection rate, she said.

Sigurdur Gislason, a University of Iceland geologist and study coauthor, said geothermal companies around the world have shown interest in the technology. But, he said, its greatest promise would be with fossil-fuel-powered plants, smelters and other heavy industries that produce far more emissions. The main stumbling block beyond the needed basalt, he said, is the water required—about 25 tons for every ton of CO2. But, he said, in many places seawater could be used. A 2010 Lamont study has already outlined basaltic seafloors off U.S. coasts that could be used to take up emissions. Separation and injection of CO2 in most other projects has been estimated to cost a steep $130 or so a ton. The Hellisheidi operation has an advantage in that it largely uses the plant’s existing infrastructure to reinject the solution, and doesn’t bother purifying the CO2. Its cost is only $30 a ton, said Aradottir.

Fossil-fuel plants might not be able to do it as cheaply—and they would not be able to do it at all without abundant water. Another possible hitch: a separate study out this May identified subterranean microbes that seem capable of feeding off carbonate minerals and using them to release methane, a greenhouse gas even more potent than carbon dioxide. That means nature could sneak in and reverse the solidification process. Such microbes were thought to exist only on the deep ocean floor, but researchers found them in a California spring. Microbiologists from the Paris Institute of Earth Physics have already started studying underground microbes at the Carbfix site to investigate how they might interact with the carbon in injection.

Recently, other companies have looked at other innovative ways to use up power plants’ carbon emissions. Projects include one backed by Exxon to build fuel cells that turn CO2 to energy, and an initiative by Ford to convert emissions to solid foams to build the interiors of vehicles. In a project in Oman, a separate Lamont-Doherty group is looking into pumping emissions into a different kind of rock, peridotite, which may react even more rapidly with CO2.

Lead author Juerg Matter, an adjunct researcher at Lamont now based at the United Kingdom’s University of Southampton, said, “We need to deal with rising carbon emissions. This is the ultimate permanent storage—turn them back to stone.”

Learn more about the CarbFix project: Watch video of a presentation given by Martin Stute on June 24, and read more about the project as it was underway.