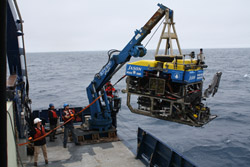 Researchers returning from a cruise some 250 miles off the coast of Oregon have reported seeing a volcanic eruption on the seafloor that they accurately forecast five years ago—the first successful prediction of an undersea eruption. The event took place at Axial Seamount, one of the most active and intensely studied undersea peaks in the world.

Bill Chadwick, an Oregon State University geologist, and Scott Nooner, a geophysicist at Columbia University’s Lamont-Doherty Earth Observatory, have monitored the seamount for more than a decade; in 2006 they published a paper saying that Axial would erupt before 2014, when seafloor-surface measurements had reached a threshold indicating that the volcano had filled with enough magma to rupture.

“Volcanoes are notoriously difficult to forecast, and much less is known about undersea volcanoes than those on land, so the ability to monitor Axial Seamount, and determine that it was on a path toward an impending eruption is pretty exciting,” said Chadwick, who was chief scientist on the recent expedition. 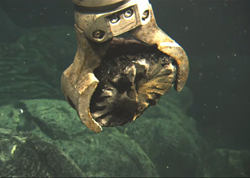 Axial last erupted in 1998. Chadwick, Nooner and colleagues have monitored it ever since, using precise bottom-pressure sensors – the same instruments used to detect tsunamis in the deep ocean – to measure vertical movements of the floor of the volcano’s crater, or caldera, much like scientists use satellite ground-positioning instruments on land to measure movements of the ground. Before the eruption, the surface of the volcano was gradually inflating like a balloon, at the rate of 15 centimeters (six inches) a year, indicating that magma was rising and accumulating under the summit. When Axial erupted in 1998, the caldera floor suddenly deflated 3.2 meters (10.5 feet), as magma poured out onto the seabed. The scientists said that the volcano would be ready to erupt again when re-inflation pushed the caldera floor back to its 1998 level.

“Forecasting the eruption of most land volcanoes is normally very difficult at best, and the behavior of most is complex and variable,” said Nooner. “We now have evidence that Axial Seamount behaves in a more predictable way than many other volcanoes.” Nooner said this was likely due to the volcano’s robust magma supply, coupled with its thin crust, and its location on a mid-ocean ridge, where the crust is constantly spreading. On land, scientists have honed techniques for monitoring dangerous volcanoes such as Washington's Mount Rainier and Italy's Vesuvius. However, false alarms and nasty surprises, such as the unexpectedly powerful 1980 explosion of Washington's Mount St. Helens, are more the rule than the exception. No two volcanoes are alike, but the research at Axial could add insights into the potential behavior of similar volcanoes, said Nooner. 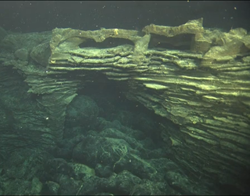 The scientists discovered the eruption on July 29, while Chadwick, Nooner and University of Washington colleagues Dave Butterfield and Marvin Lilley were leading an expedition aboard the research vessel Atlantis, operated by the Woods Hole Oceanographic Institution. Using Jason, a remotely operated robot submarine, they spotted a lava flow that had not been there the year before. “When we first arrived on the seafloor, we thought we were in the wrong place, because it looked so completely different,” said Chadwick. “We couldn’t find our markers or monitoring instruments or other distinctive features on the bottom. Once we figured out that an eruption had happened, we were pretty excited.”

The eruption excited biologists, too. When undersea eruptions occur, huge amounts of heat emerge, the chemistry of seafloor hot springs changes, and pre-existing biological communities are often destroyed, while new ones form. Some species are found only right after eruptions. Butterfield has been tracking the chemistry and microbiology of hot springs around the caldera since the 1998 eruption. “The seawater within the caldera was much murkier than usual, and that meant something unusual was happening,” he said. The scientists will examine the chemistry of vent water samples and work with Julie Huber of the Marine Biological Laboratory to analyze DNA and RNA of microbes in the samples.

The team also recovered instruments, including two bottom pressure recorders and two ocean-bottom hydrophones, which showed that the eruption took place on April 6 of this year. A third hydrophone was found buried in the new lava flows. The flow was at least two kilometers (1.2 miles) long, but so far, it is hard to tell its full scope, said Chadwick. He said that it might be three times bigger than the one in 1998. The latest eruption caused the caldera floor to sink by more than two meters (six feet). 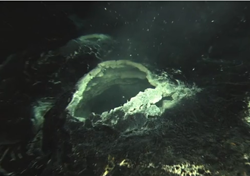 The bottom-anchored instruments documented hundreds of tiny earthquakes and sinkage of the caldera during the volcanic eruption, but those readings were not retrieved until the latest visit. On the day of the eruption, land-based seismic monitors and a hydrophone array operated by the U.S. Navy detected only a handful. Bob Dziak, an Oregon State marine geologist who monitors the Navy array, said that because the quakes detected were so few and relatively small, the team did not suspect an eruption at the time.

The scientists will measure the rate of inflation over the next few years to see if they can successfully forecast the next event. “The acid test in science – whether or not you understand a process in nature – is to try to predict what will happen based on your observations,” Chadwick said. “Now we can build on that knowledge and look to apply it to other undersea volcanoes – and perhaps even volcanoes on land.”

The study was jointly funded by the National Oceanic and Atmospheric Administration and the National Science Foundation.