Iron particles catching a ride on glacial meltwater washed out to sea are likely fueling a recently discovered summer algal bloom off the southern coast of Greenland, according to a new study.

Microalgae, also known as phytoplankton, are plant-like marine microorganisms that form the base of the food web in many parts of the ocean. “Phytoplankton serve as food for all of the fish and animals that live there. Everything that eats is eating them ultimately,” said Kevin Arrigo, a biological oceanographer at Stanford University and lead author of the study.

The bloom blankets some 200,000 square miles, turning parts of the Labrador Sea turquoise. It had gone largely unnoticed until recent years. Scientists have long had access to satellite images of the region, but few have looked carefully at the images from summer.

After learning about the summer bloom a few years ago, the study’s authors set out to discover what might be fueling it. A separate, earlier bloom in the spring is well known to marine biologists. In high-latitude regions, where the temperature plummets in winter, the ocean gets mixed as cooling surface water sinks to the bottom, and bottom nutrients such as nitrogen and phosphorus, along with a relatively small amount of iron, are dredged to the top. In spring, sunlight increases, and this brings a bloom. But this does not account for the newly studied summer bloom. 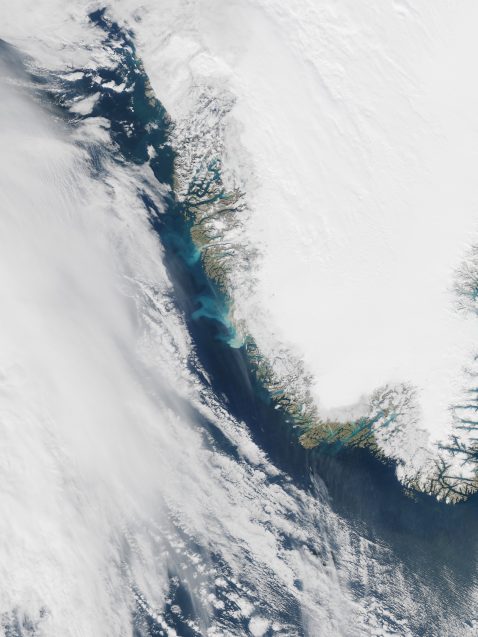 To resolve the question, the team compared NASA satellite imagery of the summer bloom and computer models simulating Greenland’s glacier melt and ocean currents. They found a significant correlation between the flow of freshwater from Greenland’s melting glaciers and the bloom, which develops about a week after the arrival of glacial meltwater in early July, and persists until the meltwater slows in August or September.

In the study, published in the journal Geophysical Research Letters, the scientists hypothesize that the bloom is caused by iron-rich particles washed off from rocks and soil. Because iron is rare compared to other nutrients in this region, its addition brings a new growth burst. Scientists have already observed that increased supplies of the element in other iron-poor regions can increase phytoplankton growth; some have proposed adding iron artificially in order to increase the ocean’s uptake of excess carbon from the atmosphere, as a way of fighting climate change.

The study “shows the importance of approaching the changes in Greenland, and in the Arctic, in a system-oriented way,” said glaciologist Marco Tedesco of Lamont-Doherty Earth Observatory, a coauthor of the study. Many scientists focus mainly on the physical effects of temperature on the Arctic; this shows that the region’s ecology also is “very sensitive to small changes,” he said. If iron-rich meltwater is indeed what’s spurring the summer bloom, then the region’s biological productivity could rise in the decades to come as climate change causes Greenland’s glaciers to melt earlier in the year.

The scientists have submitted grant proposals to the National Science Foundation to fund a summer research cruise to Greenland to test their hypothesis. They hope to arrive before the summer bloom starts, to measure the concentration of nutrients, especially iron, and then make the same measurements after the glacial meltwater arrives and the blooms start.

The other coauthors of the study are Gert van Dijken of Stanford; Renato Castelao, Hao Luo, Hilde Oliver and Patricia Yager of the University of Georgia; Åsa Rennermalm of Rutgers University; and Thomas Mote of NASA Goddard Institute for Space Studies. Funding was provided by NASA.

(This article adapted from a press release by Stanford University.)