A new study looking at seven centuries of water flow in south Asia’s mighty Brahmaputra River suggests that scientists are underestimating the river’s potential for catastrophic flooding as climate warms. The revelation comes from examinations of tree rings, which showed rainfall patterns going back centuries before instrumental and historical records.

Many researchers agree that warming climate will intensify the seasonal monsoon rains that drive the Brahmaputra, but the presumed baseline of previous natural variations in river flow rests mainly on discharge-gauge records dating only to the 1950s. The new study, based on the rings of ancient trees in and around the river’s watershed, shows that the post-1950s period was actually one of the driest since the 1300s. The rings show that there have been much wetter periods in the past, driven by natural oscillations that took place over decades or centuries. The takeaway: destructive floods probably will come more frequently than scientists have thought, even minus any effects of human-driven climate change. Estimates probably fall short by nearly 40 percent, say the researchers. The findings were just published in the journal Nature Communications.

“The tree rings suggest that the long-term baseline conditions are much wetter than we thought,” said Mukund Palat Rao, a recent Ph.D. graduate of Columbia University’s Lamont-Doherty Earth Observatory and lead author of the study. “Whether you consider climate models or natural variability, the message is the same. We should be prepared for a higher frequency of flooding than we are currently predicting.” The Brahmaputra River, seen here from a ferry in Bangladesh, where it is known as the Jamuna. It is at points nearly too wide to see bank to bank. (Kevin Krajick/Earth Institute)

The Brahmaputra is one of the world’s mightiest rivers, flowing under a variety of names and braided routes some 2,900 miles through Tibet, northeast India and Bangladesh. Near its mouth, it combines with India’s Ganga River to create the world’s third largest ocean outflow, behind only the Amazon and the Congo. (It is tied with Venezuela’s Orinoco.) At points, it is nearly 12 miles wide. Its delta alone is home to 130 million Bangladeshis, and many millions more live upstream. 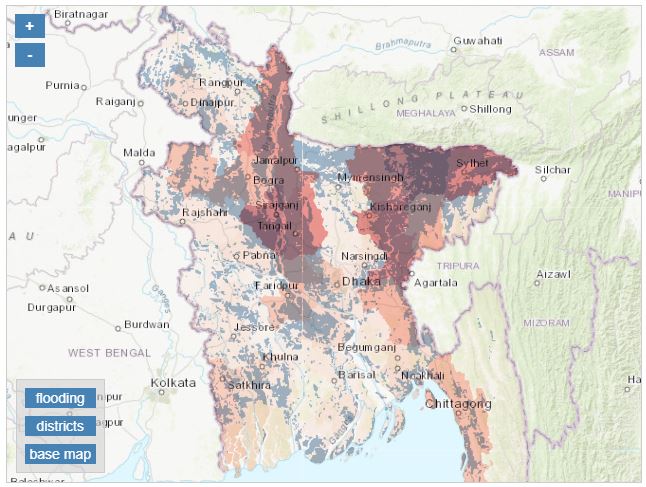 According to the UN, about 30 million Bangladeshis were exposed or living close to flooded areas during July 2020. Flood areas are shown in blue; districts are shaded red by population potentially exposed. Data: Unitar / Unosat and NOAA. (Areas have been simplified.) View interactive version.

The river routinely floods surrounding areas during the July-September monsoon season, when moisture-laden winds sweep in from the Indian Ocean and bring rain along its length, from its Himalayan headwaters on down to the coastal plain. As with the Nile, the flooding has a good side, because the waters drop nutrient-rich sediment to replenish farmland, and some degree of flooding is essential for rice cultivation. But some years, the flooding runs out of control, and low-lying Bangladesh gets hit hardest. In 1998, 70 percent of the country went underwater, taking out crops, roads and buildings, and killing many people. Other serious floods came in 2007 and 2010. In September 2020 the worst flooding since 1998 was still underway, with a third of Bangladesh inundated, and 3 million people rendered homeless. Low-lying land along the river in Bangladesh frequently floods during rainy season. This can benefit crops, but can also lead to massive destruction when it goes too far. (Kevin Krajick/Earth Institute)

Higher temperatures drive more evaporation of ocean waters, and in this region that water ends up as rainfall on land during the monsoon. As a result, most scientists think that warming climate will intensify the monsoon rains in coming decades, and in turn increase seasonal flooding. The question is, how much more often might big floods happen in the future?

They then looked at data from the rings of ancient trees that researchers sampled at 28 sites in Tibet, Myanmar, Nepal and Bhutan, at sites within the Brahmaputra watershed, or close enough to be affected by the same weather systems. Most samples were taken from conifer species in the last 20 years by scientists from the Lamont-Doherty Tree Ring Lab, led by study coauthor Edward Cook. Since people have long been cutting down trees in populous areas, Cook and his colleagues sometimes hiked for weeks to reach undisturbed sites in remote, mountainous terrain. Straw-width samples were bored from trunks, without damage to the trees. The oldest tree they found, a Tibetan juniper, dated to the year 449. Scientists calculated past rainfall and river discharges by measuring the rings of ancient trees within or near the Brahmaputra watershed. Here, researcher Dorji Dukpa of Bhutan’s Department of Forest and Park Services extracts a core from a Himalayan hemlock. (Paul Krusic/University of Cambridge)

Back at the lab, they analyzed the tree rings, which grow wider in years when soil moisture is high, and thus indirectly reflect rainfall and resulting river runoff. This allowed the scientists to assemble a 696-year chronology, running from 1309 to 2004. By comparing the rings with modern instrumental records as well as historical records going back to the 1780s, they could see that the widest rings lined up neatly with known major flood years. This in turn allowed them to extrapolate yearly river discharge in the centuries preceding modern records. They found that 1956-1986 was in only the 13th percentile for river discharge, and 1987-2004 in the 22nd.

This, they say, means that anyone using the modern discharge record to estimate future flood hazard would be underestimating the danger by 24 to 38 percent, based solely on natural variations; human driven warming would have to be added on top of that. “If the instruments say we should expect flooding toward the end of the century to come about every four and a half years, we are saying we should really expect flooding to come about every three years,” said Rao.

Climate change will almost certainly affect the flow of other major rivers in the region, though not necessarily in the same ways. The mighty Ganga, flowing mainly through India, is also powered mainly by the monsoon, so it will likely behave much like the Brahmaputra. But the Indus, which flows through Tibet, India and Pakistan, derives most of its flow not from the monsoon, but rather from the winter buildup of snow and ice in Himalayan glaciers, and subsequent melting in summer. In 2018 Rao and colleagues published a tree-ring study showing that the river’s flow has been anomalously high in recent years. They suggest that as climate warms and the glaciers undergo accelerated melting, the Indus will supply plenty of needed irrigation water—but at some point, when the glaciers lose enough mass, the seasonal spigot will turn the other way, and there may not be enough water.

Human vulnerability to floods along the Brahmaputra has increased in recent years due not only to sheer water volume, but because population and infrastructure are growing fast. On the other hand, accurate flood warnings have become more advanced, and this has helped many villages reduce economic and social losses. “High discharges will continue to be associated with an increased likelihood of flood hazard in the future,” write the study authors. But, they say, this could be counteracted to some extent by “potential changes in policy, land use, or infrastructure that may ameliorate flood risk.”

The study was also coauthored by Benjamin Cook, Rosanne D’Arrigo, Brendan Buckley and Daniel Bishop, all affiliated with the Lamont-Doherty Tree Ring Lab; Upmanu Lall of the Columbia Water Center; Columbia University ecologist Maria Uriarte; and collaborators at other U.S. universities and in Australia and China.