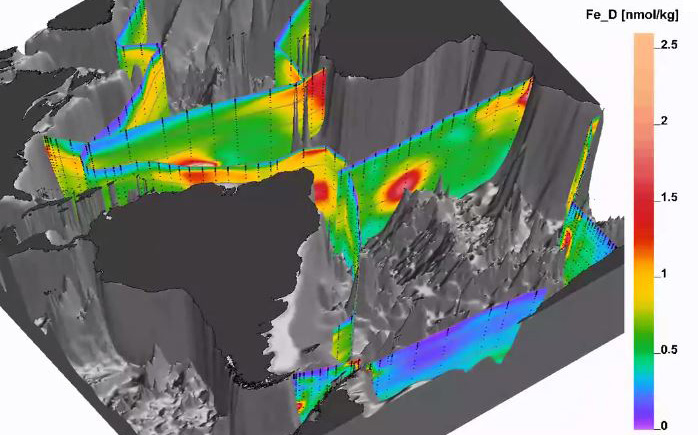 GEOTRACES was established to map trace elements and nutrients, from seafloor to surface, in all oceans. This view of the Atlantic shows concentrations of dissolved iron. Source: eGEOTRACES Atlas

Human actions are changing the oceans’ chemistry. Pollution washes in from the coasts, iron-laden dust blows in from increasingly arid land, greenhouse gases raise surface temperatures and carbon dioxide levels. To predict how marine ecosystems are going to respond to these changes, we need to understand how marine biology and ocean chemistry interact.

Until recently, too little data existed about the distribution of trace elements and nutrients in the oceans to provide a global picture. In 2002, a group of scientists connected with Columbia University’s Lamont-Doherty Earth Observatory set out to fill those gaps. They launched GEOTRACES, an extraordinary international mission to consistently map the oceans’ vital trace elements using cutting-edge technology. Today, data collected through GEOTRACES is revealing areas of excesses and shortages of nutrients, such as iron, zinc and cobalt, that support marine ecosystems around the world.

This week, scientists from several countries gathered at Lamont to focus on the next phase of GEOTRACES. While ocean sampling continues, the scientists now have enough data to begin combining their expertise across the disciplines to analyze data in ways that individual scientists couldn’t do alone.

One research priority among several that emerged from the Lamont workshop involves expanding our understanding of nutrient cycling. When algae die, they sink, and through decomposition, nutrients are recycled back into the ocean. Determining how fast and at what depths that happens provides important information about how quickly nutrients are returned to populations at the surface. Changes in that rate, which could be caused by changes in ocean chemistry, circulation or temperature, for example, could affect entire ecosystems.

Another priority will be to determine the sensitivity of algae to various nutrients in regions around the world. Using cutting edge tools of molecular biology, investigators can measure specific proteins to tell if organisms in certain areas are stressed by lack of nutrients, while geochemists can determine how much of the nutrient is present at different depths, even at ultra-low concentrations. 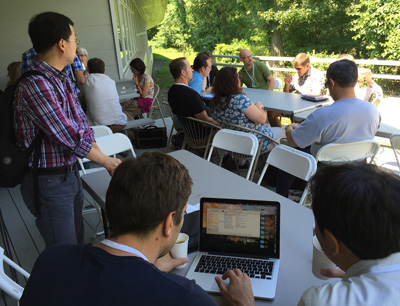 The scientists can bring a variety of analysis and modeling techniques together to begin answering questions in those and other areas.

“Through this work, we can begin to understand the chemical-biological coupling that controls the whole structure – the health, the fertility of marine ecosystems,” said geochemist Bob Anderson, Ewing Lamont Research Professor at Lamont and a founder of GEOTRACES.

GEOTRACES is focusing its collaborative analysis on three tracks: The interplay between chemicals in the ocean and ecosystems, which was the focus of the Lamont workshop this week; the interaction between ocean chemicals and the environment, including sediments, air, land and volcanoes; and what we can learn about past changes in the oceans and climate using the suite of chemicals now being measured worldwide by GEOTRACES scientists.

Gideon Henderson, a geochemist at the University of Oxford who worked at Lamont in the 1990s and was one of the scientists who teamed up with Anderson to create GEOTRACES, expects the first papers on connections to sediment, land, air and volcanoes to be published in December.

“We had such sparse data before GEOTRACES, and now we have these complete cross sections, full depth across the oceans. You can see all the processes that are operating. It’s a really rich data set,” Henderson said. The 3D image above, for example, combined with basic knowledge of ocean physics, chemistry and biology, tells marine geochemists quite a bit about the distribution of iron in the ocean.

The long-term goal is to better understand and predict how the base of the food web and the ocean ecosystems are going to respond to human changes such as rising temperatures, acidification of the waters, and aridification of large areas of the world that create more dust, Anderson said. “These are basic things that affect ecosystems in the oceans," he said. "We are generating a lot of new information about how the chemical environment responds to these changes.”

Presentations from the meeting are now available on the agenda page.