The Glaciers Are Going 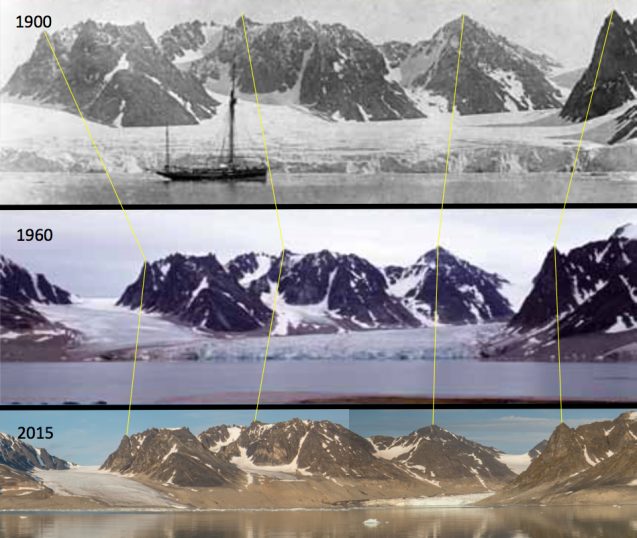 As can be seen above, the Waggonwaybreen glacier in Svalbard, Norway, has retreated substantially since 1900. Svalbard’s glaciers are not only retreating, they are also losing about two feet of their thickness each year. Glaciers around the world have retreated at unprecedented rates and some have disappeared altogether. The melting of glaciers will affect people around the world, their drinking water supplies, water needed to grow food and supply energy, as well as global sea levels.

The Intergovernmental Panel on Climate Change estimates that around the world glaciers (excluding the Greenland and Antarctic ice sheets) will decrease in volume between 15 to 55 percent by 2100 even if we are able to limit global warming to under 2˚C; they could shrink up to 85 percent if warming increases much more.

In Earth’s history, there have been at least five major ice ages, when long-term cooling of the planet resulted in the expansion of ice sheets and glaciers. Past ice ages have been naturally set off by a numerous factors, most importantly, changes in the Earth’s orbit around the sun (Milankovitch cycles) and shifting tectonic plate movements that affect wind and ocean currents. The mixture of gases in the atmosphere (such as carbon dioxide and methane) as well as solar and volcanic activity are also contributing factors. Today we are in a warm interval—an interglacial—of the Earth’s fifth ice age. The Aletsch Glacier is the largest glacier in the Swiss Alps.

A glacier is a large accumulation of ice, snow, rock, sediment and water on land that is moving down slope under its own weight and gravity. Today 10 percent of Earth’s land is covered by glaciers (including Antarctica and Greenland). They contain 75 percent of the planet’s freshwater, storing it as ice during the cold season and releasing some of it as meltwater during summer months. Runoff from glaciers cools the streams below, providing habitat for plants and animals during dry periods.

More than one-sixth of the world’s population, particularly in China, India and other Asian countries, live in the basins of glacier-fed rivers and depend on them for drinking and irrigation water. In New Zealand’s Southern Alps, Joerg Schaefer, a research professor at Lamont-Doherty Earth Observatory, and his colleagues chemically analyzed elements in rocks that were left uncovered when glaciers retreated 20,000 years ago at the end of the last ice age. They figured out how long the rocks had been exposed, then reconstructed local glacial records and compared them to other records such as Antarctic ice cores, which reveal changing atmospheric carbon dioxide levels.

“Glaciers seem to follow closely what happens with the atmospheric carbon dioxide concentration,” said Schaefer. “Throughout our glacier chronologies, whenever the CO2 started to rise, the glaciers in New Zealand started to retreat. So we think that proves that there’s a very close link between greenhouse gases, carbon dioxide, and glaciers. Which is actually very bad news, because we’re pumping so much CO2 in the air.”

Earth is actually due for a natural new ice age, explained Schaefer. Typically the interglacial between ice ages lasts 10,000 to 12,000 years, and we are already 12,000 years into this one. A natural cooling cycle should be starting, but even if it does, said Schaefer, we will not see evidence of it because humans have so altered conditions on the planet by burning fossil fuels.

Schaefer has been working on a global survey of mountain glaciers, comparing glacier retreat over the last 150 years to how glaciers behaved in the past, particularly at the end of the last ice age. “That [the transition out of the last ice age] was one of the most dramatic geological and natural changes that the Earth has seen,” he said.

“The rate of change that we see in the moment, recorded most directly and visibly by mountain glaciers, is way, way, way faster than it was at the end of the ice age,” said Schaefer. “What we have seen over the last 150 years, all over the planet, is that these mountain glaciers record a retreat corresponding to 1˚ to 1.5˚C warming over 150 years, with the biggest part of that retreat happening over the last decade. The speed with which these glaciers are retreating has exponentially speeded up…and if you compare the rate of change, nothing ever happened like that in the geological past.” The darkened ice of the Athabasca Glacier in Canada

Humans are exacerbating glacial melt because burning fossil fuels not only releases CO2, it also emits black carbon, a tiny component of air pollution that can absorb one million times more solar energy than CO2. When black carbon falls to earth with precipitation, it darkens the snow and ice, reduces their albedo (the reflecting power of a surface), warms the snow, and speeds up melting.

Marco Tedesco, a research professor at Lamont-Doherty, is researching the processes driving glacial melt in Greenland, including albedo reduction, bare ice exposure after snow layers melt away and atmospheric circulation patterns. He is studying “feedback” mechanisms such as how melting reduces albedo and increases moisture in the air, which also warms the air. “We understand these processes,” said Tedesco. “But we don’t yet know how they interact and how much they amplify each other over time to accelerate the pace of melting. Today there are more data available, more observations from space and the ground, and better and faster models. These can help us improve our estimates and better project Greenland’s contribution to sea level rise.”

“But we know things are going in one direction and will be getting much faster in this direction. There will be more warming and more melt. All the things that could slow the melting down, like the cooling of the Arctic or more accumulation of snow in summer, are not going to happen. And even if they did, they would be short, just a bump in the road.” Here are a few examples of the glaciers we are losing.

If the melting continues over the next few decades, some of the world’s most populous areas could run out of water during the dry season. For awhile, the increase in flow from melting ice and snow during the dry season will seem like a boon, but in the future, the downstream flow’s variability will increase and eventually flow could disappear altogether, impacting food production, biodiversity and economic growth.

Communities around the world rely on glacial water that has been dammed for the production of hydropower. Retreating glaciers will increase the variability of flow or decrease it, which will affect power generation. As a result of glacial melting, glacial lake outburst floods are increasing. As glaciers shrink, meltwater can form a lake that is dammed by glacial debris (ice or soil and rock) at the tongue of the glacier. But those dams can be unstable and collapse under the pressure of more melting. Peru has experienced some of the most destructive glacial lake outburst floods; between 1941 and 1950, three such floods killed 6,000 people.

Glacial retreat can destablilize slopes, which can lead to landslides, and warming temperatures can trigger avalanches. In 2002, a huge portion of the Kolka Glacier on the Russia-Georgia border broke off and, hastened by the meltwater underneath, created an avalanche that hurtled down the mountain at 150 miles per hour, killing over 100 people in the town below. The onrush lasted 7 minutes. In July 2016, two avalanches occurred in Tibet, one of which killed nine people.

If all the world’s glacial ice were to melt, sea levels would rise 265 feet as the meltwater flowed into rivers and ended up in the ocean. Most sea level rise would come from Antarctica and Greenland in the Arctic, not mountain glaciers, which would contribute only about 20 inches.

Recent research about melting glaciers in the Arctic (which has been warming twice as fast as the rest of the world for the last half-century) and Antarctica suggest that the low-end projections for sea level rise made by the Intergovernmental Panel on Climate Change are too low. In its most recent report, the Panel projected that if we are able to reduce emissions significantly, sea levels could rise 11 to 24 inches by 2100; if emissions remain high, we could see a rise of 20 to 38 inches. Sea level rise will cause coastal flooding, erosion, damage to infrastructure and buildings, ecosystem changes and compromised drinking water sources.

The freshwater from glacial melt flowing into the oceans has an impact not only on sea levels, but also on ocean acidification, biological productivity and weather patterns. The amount of freshwater in the upper layers of the Arctic Ocean, which has increased 11 percent since its 1980-2000 average, could also affect circulation in the Nordic Sea and the Atlantic Ocean. The influx of freshwater could potentially disrupt or slow down the “Global Ocean Conveyer,” the regular cycling of cold water south and warm water north through the Atlantic Ocean that plays a huge part in the climate of North America and Western Europe, as well as in ocean nutrient and carbon dioxide cycles.

Pollutants like pesticides, heavy metals, persistent organic pollutants and PCBs, polychlorinated biphenyls, have made their way to the Arctic and Antarctica on ocean and wind currents. When the glaciers melt, pollutants once trapped in ice are released and can enter rivers, oceans and food webs where they bioaccumulate in marine creatures; those at the top of the food chain, like polar bears and humans, will be affected the most.

Researchers have also found living bacteria and microbes in 420,000-year-old ice cores and revived them. As glaciers melt, masses of microbes, some 750,000 years old, are released from the ice. When they reach the ocean, they could affect ocean chemistry and marine ecosystems, with unpredictable effects. Scientific American reported, “…the biomass of microbial cells in and beneath the ice sheet may amount to more than 1,000 times that of all the humans on Earth.”

Ongoing research is key to understanding the melting glaciers and their potential impacts on safety, water supplies, energy production and economies. “The important question for the future is going to be, when are problems going to arise as a result of the changes in glaciers,” said Tedesco. “What are the things we can tackle, understanding the time line…I’d want to know before the Netherlands is under water so that policy adjustments can be made to protect people. And projections for the impacts on cities are going to be different from the impacts on food production or on GDP.”

“We need help from political and social scientists…we have to transfer the information to policy makers to prepare for this,” said Schaefer. “We need the five- to 10-year perspective—that is our mission here at Lamont-Doherty, to preach that to everybody.”