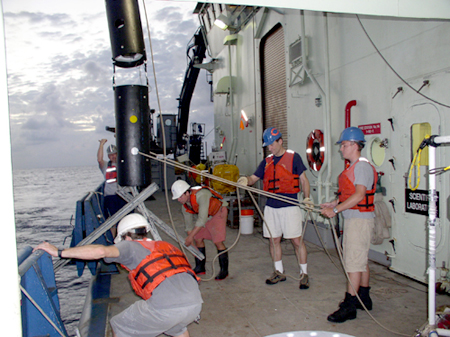 This bottom pressure recorder uses a paroscientific pressure gauge to monitor changes in the depth of the seafloor because of volcanism and the movement of magma.

September 4, 2007--Columbia University’s Lamont-Doherty Earth Observatory has established a $3 million endowment to further its cutting-edge work in designing new scientific instruments to study waves, winds, earthquakes and other natural phenomena. A gift of $1.5 million, made by instrument designer and maker Jerome M. Paros, will be matched one for one with institutional funds. The endowment will set up a chair in observational geophysics.

“Having the right instruments is critical to answering all sorts of fundamental scientific questions,” said G. Michael Purdy, director of Lamont-Doherty. “For this, we need continuous technological advances. Jerry Paros understands that. His generosity will keep Lamont in a leadership position, and further the global community’s work in vital areas that we all care about.”

Paros received his graduate degree in physics from Columbia’s Graduate School of Arts and Sciences in 1963. He is the founder of Redmond, Washington-based Paroscientific, Inc., Quartz Sensors, Inc. and other high-technology instrumentation companies. The instruments are used worldwide in geophysical studies to measure pressure, acceleration, depth, weight and other parameters. Paros holds more than 20 patents, and is the author of numerous articles on scientific measurements. His rugged, highly accurate devices have been used by researchers, government and industry in tsunami detection, operation of undersea vehicles, aerospace guidance systems, weather measurements, studies of tides and waves, and seismic studies.

“The purpose of this endowment is to attract and retain a distinguished senior scientist who will conduct research in observational geophysics,” said Paros. “The goal of this research is to develop and deploy new instrumentation and measurement systems that will advance cross-disciplinary knowledge in the oceanic, atmospheric, and earth sciences.”

The gift comes on top of a $550,000 bequest that Paros gave Lamont-Doherty in 2006, which was matched by an equal amount from the Palisades Geophysical Institute. This has endowed the new Paros-PGI Observatory Technical and Innovation Center. The center has already provided seed money for an inexpensive, lightweight system that can register data from a wide variety of instruments on the sea bottom; low-cost seismic sensors that can be deployed widely in poor nations facing high risk for earthquakes; and an instrument that would directly and cheaply measure gases dissolved in groundwater, without the need to ship samples to a lab.

The new endowment will pay the salary and expenses of the new Jerome M. Paros Senior Research Scientist of Observational Geophysics. The scientist, not yet named, will concentrate on developing precise, cost-effective instruments with wide applications in a variety of fields. Among possible projects, according to Purdy:
--“Ice seismometers” to study quakes generated within glaciers—a phenomenon recently documented by Lamont scientists, but hard to measure, since instruments can be swallowed by shifting ice
--Development of better seismic instruments for the rugged topography and currents of the deep ocean floor. These will be used to image the interior of the earth beneath the oceans, and to locate earthquakes and volcanic eruptions.
--Techniques for measuring small movements of seafloors, including those that produce hard-to-detect “slow earthquakes”—a phenomenon recently discovered along coasts that might be related to much larger, devastating earthquakes
--Instruments to measure and locate extremely low-frequency sound in the atmosphere and oceans

“Our science is only as good as the measurements we make. Jerome Paros’s gifts will ensure that the science will be as good as it can be,” said Purdy.