Greener Ways to Keep Cool During a Heat Wave 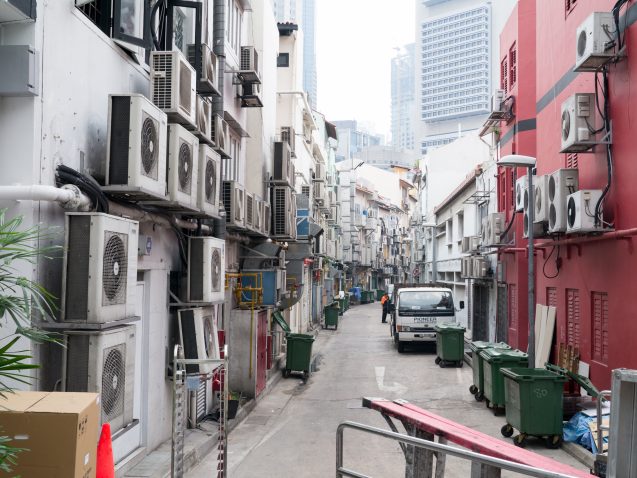 In July, temperatures reached almost 106˚F in Kumagaya, Japan, breaking all the country’s records. Seventy-seven people died throughout the country, and over 30,000 more were hospitalized. In Karachi, Pakistan, temperatures reached 111˚F in May, killing 65. And Chino, a city near Los Angeles, recently hit 120˚F. In the U.S., 1,542 new records for daily high temperature and 85 new monthly high records have been set just this summer alone.

In the future, devastating heat spells such as these may end up being the norm as climate change impacts worsen.

“Heat extremes are probably the extreme event that climate scientists have the most confidence will increase in frequency, intensity and duration as greenhouse gas concentrations rise,” said Radley Horton, who studies climate extremes and adaptation at Columbia University’s Lamont-Doherty Earth Observatory. 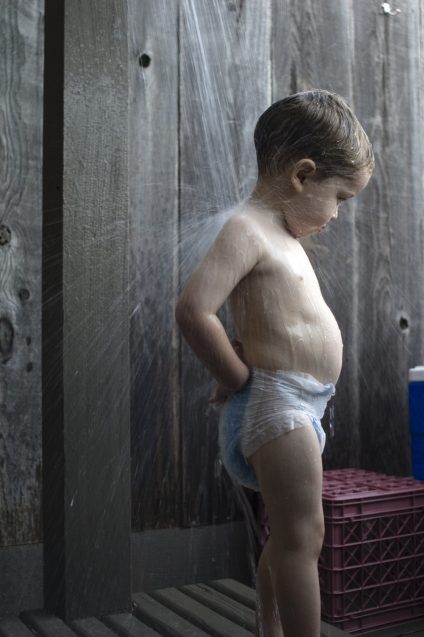 A new study found that heat waves exacerbated by global warming could dramatically increase the number of heat-related deaths in the future.

“It is really important for people to try to stay cool during the summer heat and especially during heat waves, because heat can kill people and it can make people sick, and that includes even healthy young folks and athletes,” said Kim Knowlton, assistant clinical professor in environmental health sciences at Columbia University’s Mailman School of Public Health.

Cooling is not a luxury. If the body cannot cool down, heat stress can lead to organ failure and death. When the body’s temperature reaches 104˚F or higher, heat stroke can produce altered mental states, sweat changes, nausea, vomiting, headache, rapid breathing and a racing heart. If untreated, it can quickly damage the brain, heart, kidneys and muscles.

Older adults, children and the economically disadvantaged who may not be able to afford air conditioning, are particularly vulnerable to the impacts of heat stress, said Knowlton. But she emphasized the need for everyone to take heat seriously in the summertime, especially with climate change making heat waves more intense, more frequent and often longer lasting. All of us are vulnerable in some way and at some time to extreme heat. 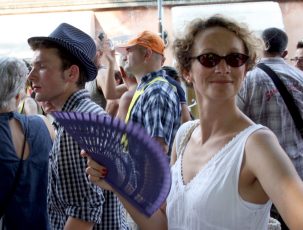 Moreover, night times, when it is usually cooler, are getting hotter. These rising overnight temperatures are posing additional threats to public health since bodies need cooler nights to recover from the day’s heat.

When dealing with heat, most people who can will automatically crank up their air conditioning, but this becomes a vicious cycle since most run on electricityproduced by greenhouse gas-emitting coal and natural gas plants. These emissions exacerbate global warming and only increase the need for cooling. According to a new report, 10 percent of the planet’s warming now comes from cooling technologies.

As incomes rise around the world—some 2.3 billion more people are expected to get air conditioning soon—and more cooling is installed, greenhouse gas emissions could almost double by midcentury.

In addition to the warming emissions that come from powering them, many air conditioners still use hydrofluorocarbons (HFCs), greenhouse gases which can trap 23,000 times more heat than CO2. While the Kigali Amendment to the Montreal Protocol will eventually reduce the use of HFCs, many developing countries still have six to ten years to comply. (The Environmental Protection Agency under Scott Pruitt has not supported the Kigali Agreement.)

Meanwhile, engineers are working on developing more energy-efficient cooling technology and air conditioners, but those advances could still be years away. In addition, it can take decades for some people to upgrade to new air conditioners.

If you don’t have access to air conditioning, or opt not to use it, here are some greener strategies to keep cool. Hopefully they’ll also save you money on your electricity bill.

-Dress in loose, light and light-colored clothing. Natural materials such as 100 percent cotton and linen allow your skin to breathe more than synthetic fabrics do.

-Eat lighter cold foods such as salads, low-fat dairy or frozen treats. And contrary to what one might expect, spicy foods can end up cooling you down because they make you sweat.

-Don’t use your oven or stove, but if you must cook, grill outside or choose the microwave or toaster so your house stays cooler. Drink a lot of water, and avoid caffeine and alcohol, which can dehydrate you. Keep bottles of water in the freezer, so when the ice melts, you’ll have ice-cold water on hand.

-Exercise in the early morning or in the evening when it’s cooler, and stay in the shade. If you can’t, shorten your workout time and/or reduce your exertion.

-Get damp and naked and stay in front of a fan. If you cool the pulse points where blood vessels are close to the skin—wrists, neck, elbows, ankles, behind the knees, feet, inner thighs, temple, forehead and groin—your body will cool more quickly. So chill washcloths in the refrigerator or use an ice pack on pulse points when you’re hot. 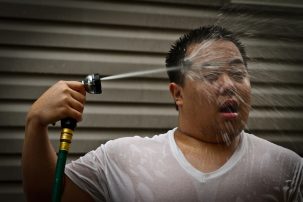 -Sleep cool. Use cotton, linen, percale or bamboo bedsheets. Consider misting your sheets or pajamas or putting them into the refrigerator or freezer for a few minutes before going to bed. Put a hot water bottle or a sock filled with rice in the freezer to create an ice pack you can take to bed or use to cool your sheets. Fill a pillow with buckwheat, which does not absorb heat and stays cooler. 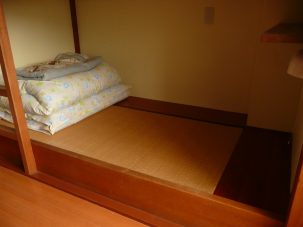 Sleep on a straw or bamboo mat, which won’t get hot. And because heat rises, keep your bed as low to the ground as possible. Sleep alone.

-Go to a public place that is air conditioned, such as the mall, library, theater or a cooling center. There are many cooling centers in New York City. Or find a public swimming pool.

-Use fans strategically. Set them up in windows or halls to get a cross breeze going. Place a bowl of ice at an angle in front of a fan so that air blows across it to create a cool breeze. 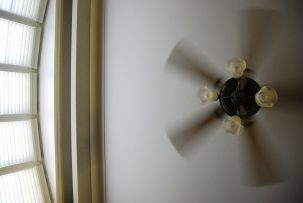 -Manage your windows for heat. Keep your blinds or curtains closed during the day, especially if they face south or west. If the night or early morning is cool, open the window but close it as the day gets hotter. Hang a wet sheet in front of an open window to create a cool breeze.

-Unplug gadgets and small appliances when you are not using them, as they generate heat even when turned off.

-Don’t run your washer, dryer or dishwasher on hot days.

-Replace your incandescent bulbs, which waste 90 percent of their energy as heat, with compact fluorescent bulbs (CFLs) or LEDs. Use lights as little as possible because all light bulbs, even CFLs, emit heat.

-Install a whole house fan in the ceiling of the upper level of the house to suck hot air from the house and send it outside through a vent, allowing cool air (if it is cooler!) from outside into the house. Or invest in a ceiling fan to circulate the air.

-Make sure your attic and roof area are properly insulated to keep heat from coming in. Caulking and weatherstripping windows also help keep heat out. Blackout or heat-blocking curtains can naturally insulate a room.

-Install shutters or external blinds to shut out the sun. 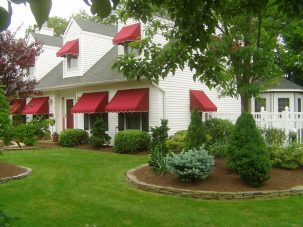 -Awnings can reduce cooling energy use by 26 percent in hot climates and 33 percent in temperate climates.

-Green roofs and walls cool buildings and homes through shading the walls and evapotranspiration (when water is lost through evaporation from the surface of plants and through their stomata). Cool roofs, too, using white or reflective paint or tiles, reflect sunlight and absorb less heat than traditional roofs.

-Plant deciduous trees (such as maple or ash) on the southwest or west side of the house. Trees not only provide shade, they also cool the air through evapotranspiration. Planting vines can also help cool a house by keeping the sun from the walls.

Whether you choose green ways of keeping cool because you care about climate change or because you don’t have access to cooling, there may come a day when the heat is unbearable.

“In taking the heat seriously, at certain points one has to make use of air conditioning because we have to take our own bodies’ thermoregulation needs into account,” said Knowlton. “It doesn’t have to be set to maximum chill—it can just provide several degrees of relief from the heat.” If you don’t have air conditioning, she recommends going to a cool public place or cooling center. 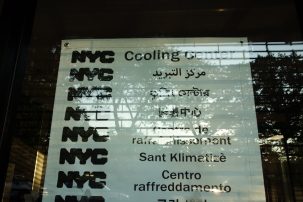 The growing use of air-conditioning may well worsen climate change. But Knowlton hopes that connecting the dots between the electricity demands of cooling and greenhouse gas emissions will spur action. “It becomes a reason to advocate for the use of clean energy sources with your utility provider,” she said.

Horton also stressed the need to push for more renewable energy. “I think that as more and more of the world begins to experience lethal combinations of heat and humidity, and given the fact that so many people have preexisting health conditions or other sources of vulnerability, we have a responsibility to include air conditioning as we think about adaptation [to climate change] and public health. That’s why it is so important to investigate ways of decarbonizing our electric grid—so that the projected increase in energy demand associated with air conditioning does not result in an increase in fossil fuel emissions.”