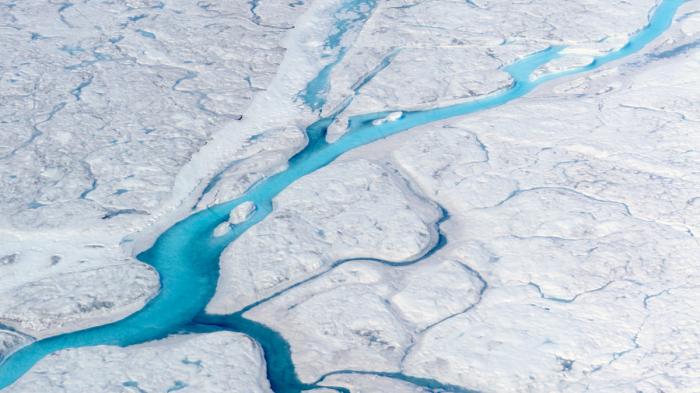 Rivers of meltwater flow across the Greenland ice sheet. Where their cold freshwater enters the ocean may make a difference for the global climate, a new study suggests. Photo: M. Tedesco/Columbia University

In southern Greenland in summer, rivers have been streaming off the ice sheet, pouring cold fresh water into the fjords. Attention has focused on the West Coast, where the majority of the meltwater has been entering the ocean in recent years, but a new study suggests that a greater risk to global climate may actually be coming from the East.

Along the West Coast, meltwater is kept close to shore by the winds that push it northward, the study shows. On the East Coast, however, as much as 60 percent of the meltwater is caught up by the East Greenland Current and ocean eddies that carry it to the Labrador Sea.

Once that cold freshwater is offshore, it can have a powerful effect on the ocean circulation that drives global climate. Recent studies have suggested that the Atlantic Meridional Overturning Circulation (AMOC) – the current that brings warm water up from the tropics toward Greenland and then turns south along North America’s Eastern Seaboard – is slowing and that cold Greenland meltwater may be to blame.

“It’s not like pouring water in a glass that’s stays where you pour it. It’s more like dumping water in a river – the freshwater will go where the river currents go. In this case, meltwater from the East is flowing toward the Labrador Sea where it can have a great effect on the global climate,” said study co-author Marco Tedesco, a research professor at Columbia University’s Lamont-Doherty Earth Observatory and adjunct scientist at NASA Goddard Institute of Space Studies. 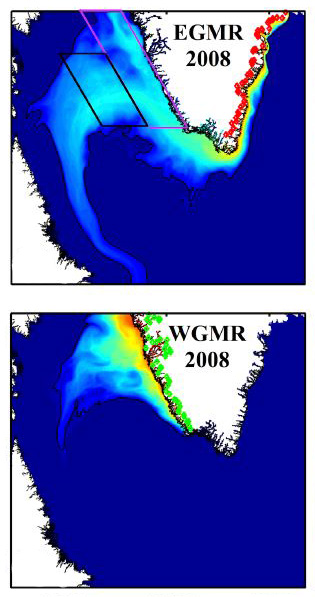 Cold, salty water sinks, mixing with the warmer water brought up from the tropics and allowing heat to escape. Cold freshwater, on the other hand, is less dense than saltwater and stays at the surface longer. In a 2015 paper, Stefan Rahmstorf of the Potsdam Institute for Climate Impact Research highlighted an abnormally cold region of the North Atlantic and suggested it may be connected with cold Greenland meltwater that appeared to have contributed to the AMOC slowing in recent decades.

In the new study, published this week in Nature Geoscience, the scientists followed the paths of Greenland’s meltwater using advanced computer modeling with maps of ice-sheet rivers and ocean-going tracers that can track currents. They found that only up to 15 percent of meltwater runoff from Southwest Greenland was being transported into the Labrador Sea, while as much as 50 to 60 percent of meltwater from Southeast Greenland reached the middle of the Labrador Sea.

“The large difference in fate between runoff coming from the West and East coasts of Greenland was quite surprising,” said co-author Renato Castelao of the University of Georgia. “While many studies have quantified nutrient fluxes in meltwater runoff from West Greenland, our results suggest that the northern Labrador Sea will be more influenced by chemical constituents introduced along the East Coast. Constraining fluxes from East Greenland glaciers will be important to quantify the potential impacts of increased runoff on stratification and biogeochemical processes in a region of the ocean that plays a critical role on global climate.”

Greenland’s melt rate is predicted to increase as the planet warms, also affecting sea level rise. On land, Tedesco has also shown how Greenland’s melting is triggering feedback loops, with the effects of melting reducing the ice sheet’s albedo, or reflectiveness, which increases melting. With that in mind, the authors also explored what would happen in the ocean if Greenland’s meltwater rate doubled. Doubling meltwater would more than double the impact, keeping abnormally cold regions in the Labrador Sea later into winter, they write.

Former NASA-GISS Director James Hansen, now director of the Climate Science, Awareness and Solutions program at Columbia University, waved a red flag last month about the risks that a melting Greenland Ice Sheet could be creating for ocean circulation, warning that increasing meltwater could shut down the AMOC. If that happened, the North Atlantic would cool and the tropics would continue to warm as CO2 levels increased. The large temperature difference between sea surface and air temperature could drive severe storms along the U.S. East Coast, Hansen warned.

“What happens in Greenland is important, not just for the Arctic but for everything that happens on our planet,” Tedesco said. “You melt something on the East Coast of Greenland, that’s impacting the ocean at both local and global scales, which in turn impacts the climate and life of the Earth.”