Following record-high temperatures and melting records in northwest Greenland in summer 2015, a new study provides the first evidence linking melting in Greenland to the anticipated effects of a phenomenon known as Artic amplification.

Arctic amplification, in the simplest terms, is the faster warming of the Arctic compared to the rest of the Northern Hemisphere as sea ice disappears. It is fueled by a feedback loop: rising global temperatures are melting Arctic sea ice, leaving dark open water that absorbs more solar radiation, and that warms the Arctic even more. Arctic amplification is well documented, but its effects on the atmosphere are more widely debated. One hypothesis suggests that the shrinking temperature difference between the Arctic and the mid-latitudes will lead to a slowing of the jet stream, which circles the northern latitudes and normally keeps frigid polar air sharply separated from warmer air in the south. Slower winds could create wilder swings of the jet stream, allowing warm, moist air to penetrate farther north.

The new study, published this week in the journal Nature Communications, shows that those anticipated effects occurred over northern Greenland during the summer of 2015, including a northern swing of the jet stream that reached latitudes never before recorded in Greenland at that time of year. 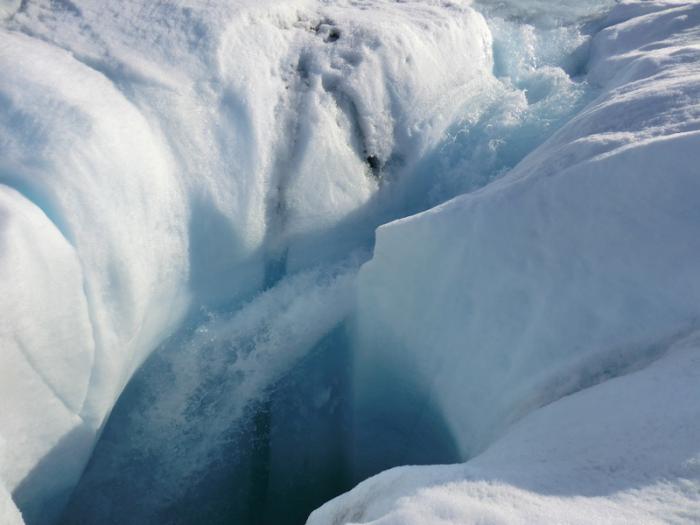 A stream of meltwater flows across the Greenland ice sheet. Photo: Marco Tedesco

“How much and where Greenland melts can change depending on how things change elsewhere on earth,” said lead author Marco Tedesco, a research professor at Columbia University's Lamont-Doherty Earth Observatory and adjunct scientist at NASA Goddard Institute for Space Studies. “If loss of sea ice is driving changes in the jet stream, the jet stream is changing Greenland, and this, in turn, has an impact on the Arctic system as well as the climate. It’s a system, it is strongly interconnected and we have to approach it as such.”

The Greenland ice sheet, earth’s second largest after Antarctica, holds enough ice that, if it were to melt entirely, it would raise average global sea level by about seven meters. Understanding the drivers of melting is critical to understanding how quickly and by how much sea level will rise in the future and how Greenland’s freshwater runoff will affect ocean circulation and ecology.

Northwest Greenland’s summer of melt started in June 2015, when a high-pressure ridge squeezed off from the jet stream, the study shows. It moved westward over Greenland until it sat over the Arctic Ocean and affected weather across the island through mid-July. 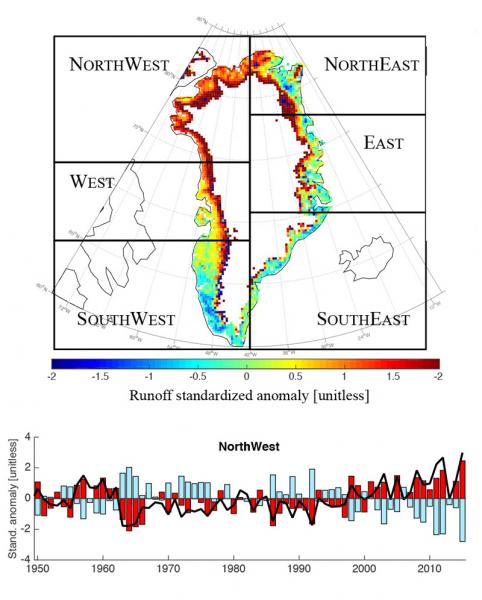 Northern Greenland also set an unusual July record for wind: the winds blew east to west on average, rather the usual west to east; only two other years on record show easterly winds on average in July, both near zero. At the same time, the jet stream’s northernmost ridge swung farther north than ever recorded for that month, passing 76 degrees North latitude, nearly 2 degrees farther north than the previous July record, set in 2009, the authors write.

The same atmospheric pattern had a different impact on southern Greenland, where new melting records have been set over the past decade. The south saw more snow during summer of 2015 and less melting than previous years.

What drove the changes?

Recent studies exploring the potential effects of Arctic amplification have showed that high-pressure blocks connected to northward swings of the jet stream have become more common near Greenland. Edward Hanna of the University of Sheffield, a co-author of the new Nature Communications paper, released a study in May using the Greenland Blocking Index to measure the strength of stationary high-pressure systems over the past 165 years and found that seven of the top 11 systems had occurred since 2007.

“The significant increase in Greenland high-pressure blocking that has occurred in the last 20 to 30 years is clearly related to recent record warming over the region, as well as jet-stream changes,” Hanna said. “This makes it more likely than not that within the next five to 10 years we will witness further record Greenland melt events like in 2012 and 2015.”

“The Arctic is full of climate surprises, and Greenland is a key player,” said James Overland, an oceanographer and climate scientist at the National Oceanic and Atmospheric Administration who was not involved in the new study. “Climate models suggest a 4 degree Celsius Arctic temperature increase by mid-century, but such jet stream related surprises acting on Greenland as reported by Tedesco et al. can accelerate Arctic climate change.”

Whether the patterns seen in 2015 will continue in the future remains to be seen. This spring, Arctic sea ice set another record low for its maximum extent for the year. "Greenland also experienced early season melt in early April of this year comparable to April 2012. Record setting melt occurred later that summer, but it is too early to tell whether the same will hold true in 2016,” said co-author Thomas Mote of the University of Georgia.

“The conditions we saw in the past aren’t necessarily the conditions of the future,” Tedesco said. “If humans change the forcing, we are going into uncharted territory.”

The other co-authors of the new paper are Xavier Fettweis of University of Liege; Jeyavinoth Jeyaratnam, James Booth, and Rajashree Datta of City College of New York; and Kate Briggs of University of Leeds. The study was supported by funding from NASA's Interdisciplinary Data Science Program, NASA’s Cryosphere Program and the National Science Foundation.