Greenland's Ice Is Getting Darker, Increasing Risk of Melting 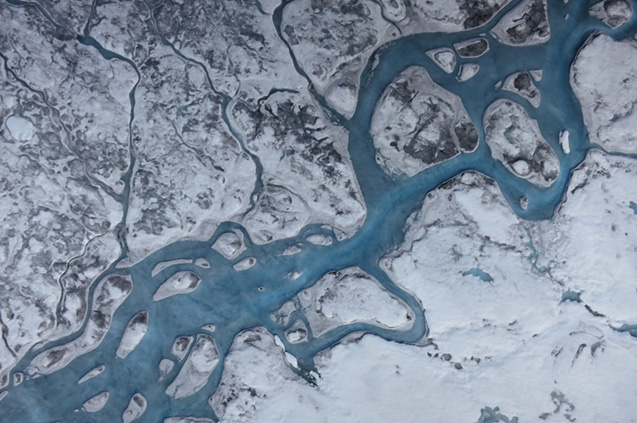 Greenland's snowy surface has been getting darker over the past two decades, absorbing more heat from the sun and increasing snow melt, a new study of satellite data shows. That trend is likely to continue, with the surface's reflectivity, or albedo, decreasing by as much as 10 percent by the end of the century, the study says.

The culprits are two feedback loops that are created by the melting itself. One of those processes isn't visible to the human eye, but it is having a profound effect.

"You don't necessarily have to have a 'dirtier' snowpack to make it dark," said lead author Marco Tedesco, a research professor at Columbia University's Lamont-Doherty Earth Observatory and adjunct scientist at NASA Goddard Institute of Space Studies. "A snowpack that might look 'clean' to our eyes can be more effective in absorbing solar radiation than a dirty one. Overall, what matters, it is the total amount of solar energy that the surface absorbs. This is the real driver of melting."

The feedback loops work like this: During a warm summer with clear skies and lots of solar radiation pouring in, the surface starts to melt. As the top layers of fresh snow disappear, old impurities, like dust from erosion or soot that blew in years before, begin to appear, darkening the surface. A warm summer can remove enough snow to allow several years of impurities to concentrate at the surface as surrounding snow layers disappear. At the same time, as the snow melts and refreezes, the grains of snow get larger. This is because the meltwater acts like glue, sticking grains together when the surface refreezes. The larger grains create a less reflective surface that allows more solar radiation to be absorbed. The impact of grain size on albedo – the ratio between reflected and incoming solar radiation – is strong in the infrared range, where humans can't see, but satellite instruments can detect the change.

"It's a complex system of interaction between the atmosphere and the ice sheet surface. Rising temperatures are promoting more melting, and that melting is reducing albedo, which in turn is increasing melting," Tedesco said. "How this accumulates over decades is going to be important, because it can accelerate the amount of water Greenland loses. Even if we don't have a lot of melting because of atmospheric conditions one year, the surface is more sensitive to any kind of input the sun can give it, because of the previous cycle."

The findings, published in the European Geosciences Union journal The Cryosphere, have global implications. Fresh meltwater from Greenland's land-based ice raises sea level and could affect ocean ecology and circulation.

Past and future changes

The study used satellite data to compare summertime changes in Greenland's albedo from 1981 to 2012.

The first decade showed little change, but starting around 1996, the data show that due to darkening, the ice began absorbing about 2 percent more solar radiation per decade. At the same time, summer near-surface temperatures in Greenland increased at a rate of about 0.74°C per decade, allowing more snow to melt and fuel the feedback loops.

A likely cause for the large shift around 1996 was a change in atmospheric circulation, Tedesco said. The North Atlantic Oscillation, a large-scale natural weather cycle, went into a phase in which summer atmospheric conditions favored more incoming solar radiation and warmer, moist air from the south. Later records show those conditions shifted in 2013-2014 to favor less melting, but the damage was already done – the ice sheet had become more sensitive. In 2015, melting spiked again to reach more than half of the Greenland  ice sheet.

While new snowfall can make the ice sheet brighter again, the dark material built up during the melt years is waiting just below the surface, preconditioning the surface to future melting, Tedesco said.

The scientists also ran a computer model to simulate the future of Greenland's surface temperature, grain size, exposed ice area and albedo. Over the current century, the model projects that the average albedo for the entire ice sheet will fall by as much as 8 percent, and by as much 10 percent on the western edge, where the ice is darkest today. Those are conservative estimates – the change could be twice that, Tedesco said.

The role of wildfires

The scientists looked into the hypothesis that soot from forest fires in China, Siberia and North America could be driving the increased darkening of the ice sheet. Using the Global Fire Emissions Database, they analyzed trends in black-carbon emissions from wildfires in those regions and Europe. While the amount of black carbon released by fires varied year to year, the scientists found no statistically significant increase during 1997-2012 to match the darkening of Greenland.

The study also raises questions about whether Greenland's high plateau is darkening as previous reports have suggested. The scientists found no long-term trend of darkening at the top, and they suspect that the Terra MODIS satellite sensor that has detected darkening in the past may actually be degrading, as previous studies have suggested. At lower elevations, the signal is much stronger.

"It is a very good paper which provides valuable new insights about the physical processes controlling the change in reflectivity of the Greenland ice sheet and specifically its darkening over time," said Eric Rignot, a senior research scientist at NASA's Jet Propulsion Laboratory who studies ice sheets but was not involved with the new study. "I also find it particularly interesting that the darkening indicated earlier by satellite sensors is now confirmed to be less, which is good news for the ice sheet. Yet the darkening of Greenland around its periphery remains a source of concern because it contributes to making the ice sheet melt away faster."

The feedback loops could be stopped with lots of snowfall and less melting, but that doesn't seem likely given the increasing concentration of greenhouse gases in the atmosphere, Tedesco said.  And while warming is expected to increase precipitation, that precipitation includes increasing rainfall, which speeds up melting. Melting is also moving to higher elevations as global temperatures warm.

"As warming continues, the feedback from declining albedo will add up," Tedesco said. "It's a train running downhill, and the hill is getting steeper."