In High Sierras, Remnants of Ice Age Tell a Tale of Future Climate

Aaron Putnam sits atop a boulder high in the Sierras of central California, banging away with hammer and chisel to chip out a sample of ice age history. Each hunk of rock is a piece of a vast puzzle: How did our climate system behave the last time it warmed up like it’s doing today?

Dressed in a baseball cap, protective goggles, gray hiking slacks and a Mainer’s classic black-and-red-checked wool jacket, Putnam pauses after several blows to take a breath and rest his arm. The cap, from a helicopter tour company, is a souvenir from another glacial expedition, to New Zealand. Last summer, he was in Mongolia. Here, at 11,000 feet, the air is thin, crisp and clear, the sky vivid blue. Sharp-peaked mountains wrap around his spot. White patches along the high slopes mark the shrinking snowfields of August. The boulder he’s on is the size of a small car, and sits on a glacial moraine, a ridge of rocks left behind thousands of years ago by retreating ice. From below you can hear the low rush of streams cascading down from high above, feeding a descending string of blue pools below: Baboon Lakes.

Where the landscape levels out, the meltwater nurtures lush green meadows dotted with wildflowers. These same streams flowing from the melting snow and ice of the high Sierras also help supply millions of people in California and Nevada with water. 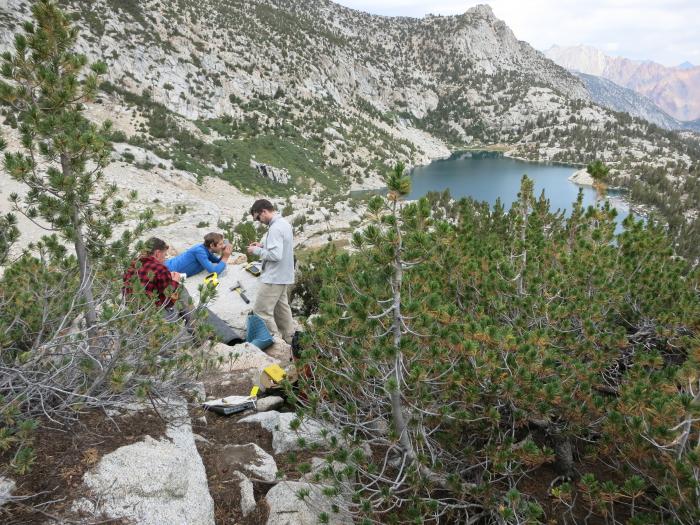 Perhaps a hundred thousand years ago, a massive glacier built by years of accumulating snowfall ground slowly forward toward the plain far to the east, picking up rocks and other debris along the way and eventually covering most of these mountains. This was the start of the last ice age, when ice sheets spread over a large portion of North America (including what is now New York City), and glaciers sprawled through these mountains. Then, starting perhaps 15,000 years ago here, the ice began to pull back, dropping rocks off its melting face as it receded.

“Just the geology hints that something big happened, and it happened so fast that the ice couldn’t achieve an equilibrium until most of the warming was done,” said Putnam, a glacial geologist from the University of Maine who also serves as an adjunct at the Lamont-Doherty Earth Observatory at Columbia University. 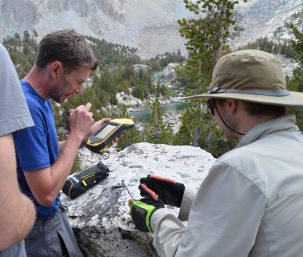 Putnam, left, studies glaciers around the world, part of an effort to understand past climate change and the potential impacts of warming today.

“In other parts of the world we’ve found that the rates of warming out of the last ice age are similar to the rates of warming that we’re witnessing today as greenhouse gas emissions increase,” he added. “And so it’s an important global experiment that’s trying to teach us about how the climate system responds to warming. And I think this valley holds some of the secrets to that mystery.”

Working along the moraine ridges of this valley, Putnam and his colleagues will collect a record of when and how fast the ice retreated. Combined with other research on the region’s climate history, Putnam said, the ultimate goal is to “use the biggest warming in our history as a means of calibrating our understanding of how the snowpacks might diminish with future warming and affect how the downstream water resources feeding Los Angeles and other communities might be impacted.” 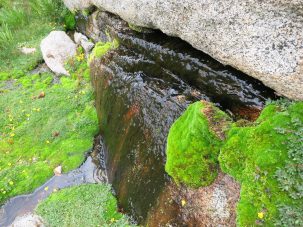 Water seeping from the rocks and cascading down the mountains feeds life along the way, and the water supply for Nevada and California.

At the time of their visit, in August 2016, California was in the grip of a multiyear drought that forced cutbacks in agriculture and tight restrictions on household water use. Since then, recent storms have brought much relief, and built up the snows that help supply water during the drier spring and summer. But the bigger question is whether such droughts will come upon California more frequently, and last longer.

Putnam’s work is part of an effort to study glaciers around the world—in Europe’s Alps, the Himalaya, Mongolia, Patagonia, New Zealand. Many have been receding for decades now. What is the relationship between temperature and the glaciers’ extent? How are different parts of the globe linked through climate systems, what drives basic climate patterns to move around, how sensitive is ice to changes in CO2?

“We have to understand the interhemispheric climate patterns,” said Joerg Schaefer, a glacial geologist at Lamont-Doherty who works with Putnam. “We are influencing climate in the moment like no geologic variability has ever done in terms of steepness of rate of change. It’s so fast. And to be able to understand how the arctic sea ice is connected to monsoons, how the northern hemisphere is connected to the southern hemisphere, how the intertropical convergence zone is moving around when you warm the northern hemisphere so much as we do in the moment … the only way you have to explain that or to understand that is to go back and understand these interhemispheric connections.” 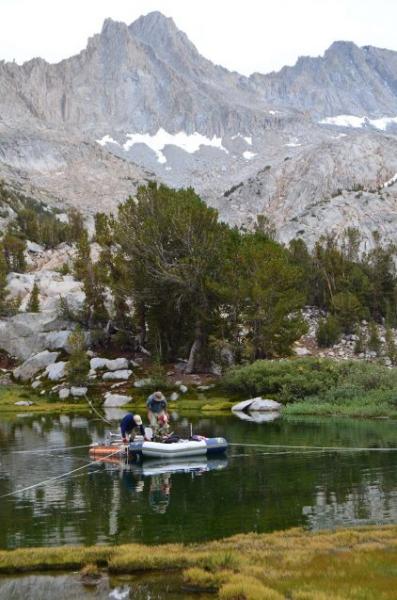 Scott Mensing from the University of Nevada-Reno works with undergraduate students Austin Bassett and Scott Wright to take sediment cores from one of the Baboon Lakes.

Putnam’s work relies on a relatively new technique called Beryllium 10 surface exposure dating. Rocks dropped off the glacier and exposed to the sky are bombarded with cosmic rays that force a chemical reaction that produces the isotope Beryllium 10. Over time, that isotope accumulates in the rock.

Boulder by boulder, Putnam and his team—Ben Hatchett of the Desert Research Institute in Nevada and Adam Hudson from the U.S. Geological Survey in Denver—chip and drill away chunks of rock. They measure the boulders, locate them using a beeping GPS unit and stow the samples away in carefully labeled canvas bags.

At Schaefer’s laboratory at Lamont-Doherty, the samples will be broken down and reduced to just the Beryllium 10. Then at the Lawrence Livermore National Laboratory in California, technicians will count the atoms, which will reveal how long a particular piece of stone had been exposed to the sun—in other words, when it was uncovered by the retreating ice.

To “calibrate” these measurements, a team accompanying Putnam on this six-day camping expedition, led by Scott Mensing of the University of Nevada-Reno, is taking core samples from the bottom of the Baboon Lakes. They will look for the earliest signs of organic material—signs of the life that sprung up in the ice’s wake. Radio-carbon dating that material will help confirm the Beryllium 10 dating. 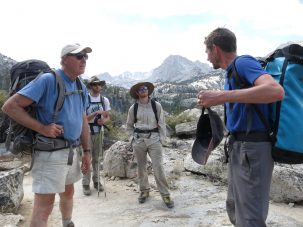 From left, Scott Mensing, Adam Hudson, Ben Hatchett and Aaron Putnam. Their work took them high into the John Muir Wilderness area. No power tools allowed: All of the rock sampling was done by hand chiseling and drilling.

The early conclusion from similar work conducted around the world is grim. “First order, the glaciers did what the CO2 did,” Schaefer said. This is still a hypothesis that needs further testing, he said, “but if that holds … this would have dramatic impacts” not only on glaciers, but also the major ice sheets on Antarctica and Greenland.

“If ice is so really regulated by CO2, then we would certainly have to face the reality that we already have committed to absurd amounts of sea level rise,” he said.

Mountain glaciers play a much smaller role in sea level rise than the polar ice sheets. But losing them would still have dramatic impacts on the societies living nearby, Schaefer said.

“We have a project in Bhutan in the Himalayas where basically the entire economy of this country is depending on hydropower that they sell to India, and the hydropower depends on the glacial melt when the monsoon is not there,” Schaefer said. While there is plenty of meltwater today, the ice is shrinking so fast that “soon they will have no water. That’s not in any engineering or economic model in these regions.”

He noted Switzerland is turning to hydropower, too, to replace nuclear power plants.

“These predictions are not based on realistic climate and glacier change scenarios,” he said. The research Putnam and others are doing into the deep past of our climate can have a direct bearing on our predictions of future climate, and its impact on water supplies, energy production and our economies.

“So that is really a direct connection from basic paleo research to energy—this is money,” Schaefer said. 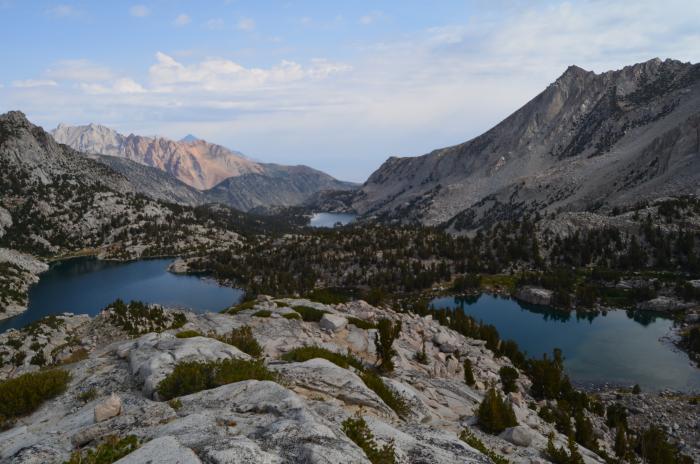