Horn of Africa Drying in Sync with Climate 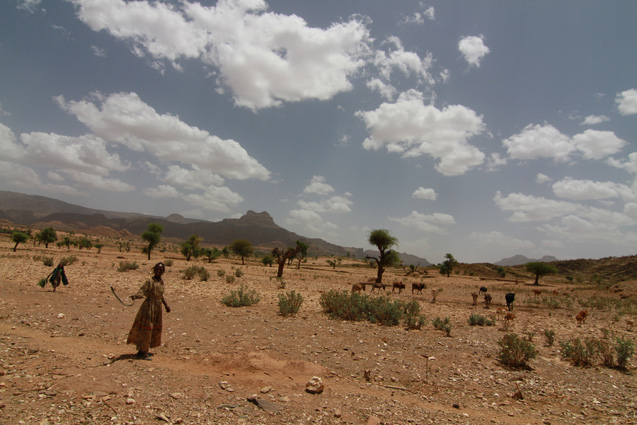 A new study projects that much of Ethiopia, Somalia and Djibouti in the Horn of Africa will grow drier as global warming progresses. In northern Ethiopia, herders often already struggle to make a living. (Brian Kahn/IRI)

A new study finds that the Horn of Africa has become progressively drier over the past century and that it is drying at a rate that is both unusual in the context of the past 2,000 years and in step with human-influenced warming. The study also projects that the drying will continue as the region gets warmer. If the researchers are right, the trend could exacerbate tensions in one of the most unstable regions in the world.

“Right now, aid groups are expecting a wetter, greener future for the Horn of Africa, but our findings show that the exact opposite is occurring. The region is drying and will continue to do so with rising carbon emissions,” said study coauthor Peter deMenocal, who heads the Center for Climate and Life at Columbia University’s Lamont-Doherty Earth Observatory.

The study, appearing in this week’s Science Advances, used a sediment core that deMenocal and his colleagues extracted from the pirate-ridden Gulf of Aden. They used the core to infer past changes in temperature and aridity. By pairing the paleoclimate record from the core with 20th century observations, the researchers determined that drying will probably continue across Somalia, Djibouti and Ethiopia. That contradicts more optimistic models that have suggested future warming might bring rainier weather patterns that could benefit the region.

“What we see in the paleoclimate record from the last 2,000 years is evidence that the Horn of Africa is drier when there are warm conditions on Earth, and wetter when it is colder,” said lead author Jessica Tierney, an associate professor at the University of Arizona and former postdoctoral associate at Lamont-Doherty.

Global-scale models used to predict future changes under global warming suggest that the region should become wetter, primarily during the “short rains” season from September to November. But the new study suggests that those gains may be offset by declining rainfall during the “long rains” season from March to May, on which the region’s rain-fed agriculture relies.

The outcome has serious implications for a region that has been racked with political instability and violence as it has dried. The Horn of Africa has suffered deadly droughts every few years in recent decades, and with them humanitarian crises as famine and violence spread. It has also become one of the most unstable regions in the world. In Somalia, as the political situation deteriorated amid droughts of the 1980s and `90s, hundreds of thousands of refugees fled the country, and pirates began raiding ships off the coast. 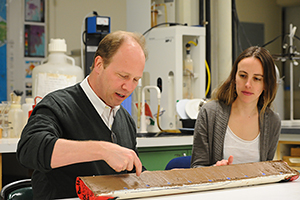 To extract the sediment core used in the study, scientists had to evade those pirates in the Gulf of Aden. Lamont-Doherty’s R/V Maurice Ewing had been attacked with rocket-propelled grenades during a previous trip. On this run , the captain of the Dutch research ship Pelagia turned off the ship’s interior and navigation lights to slip through these waters. Around them, other vessels were reporting pirate attacks.

That sediment core, which dates back about 40,000 years, has already provided new insights into Africa’s climate. In a 2013 study analyzing parts of the core, Tierney and deMenocal showed that the Sahara, which once bloomed with regular rainfall, suddenly dried out over the span of a century or two, during a warm period some 5,000 years ago—not more gradually, as many researchers had assumed. It provided evidence that climate shifts can happen quite suddenly, even if the forces driving them are gradual.

The new study uses isotopes from leaf waxes found in the sediment sample to compare rates of drying over the past 2,000 years. Plants reflect the environment that sustains them. When the climate is drier, leaf waxes are more enriched with deuterium, or heavy hydrogen isotopes; leaf waxes from wetter climates reflect the more abundant rainfall through the presence of the normal hydrogen isotopes. The researchers found an increasing shift toward heavy hydrogen in the last century as the climate, which had experienced a wet period during the Little Ice Age (1450—1850 AD), dried out.

The findings suggest that climate modeling, frequently done at a global scale, would benefit from region-specific studies with higher resolution results in high-impact areas such as the Horn of Africa, Tierney said.

“If we can simulate rainfall in these arid tropical and subtropical regions better, we can understand the future impact of climate change,” she said .

The study’s other coauthor is Caroline Ummenhofer of Woods Hole Oceanographic Institution.