People living in areas of Pennsylvania where hydraulic fracturing is booming are suffering increasing rates of hospitalization, a new study says. The study is one of a small but growing number suggesting that the practice could be affecting human health. It appears this week in the scientific journal PLOS ONE.

Scientists examining records from two counties in northeastern Pennsylvania found a 27 percent increase in hospitalization rates for cardiology-related complaints such as stroke in areas where wells were most dense. They also found significantly increased hospitalizations for neurological illnesses and skin ailments. The increases corresponded with a meteoric rise in hydraulic fracturing, or fracking, between 2007 and 2011. A third county where fracking did not take place saw no such rises. Before 2007, overall hospitalization rates in all three counties had been trending downward.

The study, which looked at 198,000 hospitalization records, was done by researchers from the University of Pennsylvania, Columbia University’s Mailman School for Public Health, and Columbia’s Lamont-Doherty Earth Observatory. 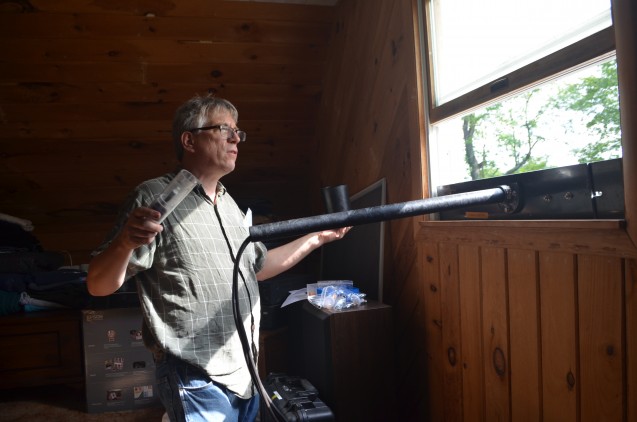 Lead author Reynold Panettieri, a professor of pulmonary medicine at UPenn, said the study did not prove that fracking itself was causing the illnesses, but the said hat it was suggestive. One factor, he said, could be tremendous increases in diesel exhaust and noise from big trucks; these, he said, could translate into disrupted sleep, stress and rising hypertension. Panettieri said the rise in hospitalizations was striking because it took place in such a short time.

An increasing number of studies has linked fracking in Pennsylvania and elsewhere with groundwater contamination, but no one has yet proved health effects resulted. The UPenn researchers say they hope to track this in the future.

Researchers at Lamont have begun studying drinking wells in heavily fracked areas of Pennsylvania in hopes of establishing more firmly whether certain substances are being introduced via fracking. Planned studies would include sampling of neighboring drinking wells before, during and after fracking. The researchers also hope to monitor air quality within homes near drill sites. They have already placed air monitors and sampled water in some homes near active or planned drilling sites for a pilot study.

The PLOS ONE study’s coauthors include Lamont geochemists Steven Chillrud, Beizhan Yan and Martin Stute; and Matthew Neidell of the Mailman School. It was supported by the National Institute of Health Sciences.

RELATED: SLIDESHOW ON AIR AND WATER MONITORING IN THE AREA