How Does the Ocean Drive Weather and Climate Extremes?

Across the globe, extreme weather events appear to be on the rise. December 2015 was the wettest month in the United Kingdom since record keeping began in 1910. More than five thousand miles west, California is in its fifth year of drought. These events threaten the health and welfare of communities, and they’re costly. Losses related to the flooding in the U.K. are expected to exceed 5 billion pounds (over $6.5 billion) while the Golden State’s drought cost an estimated $2.7 billion in 2015 alone.

When ocean currents change, they modify the sea surface temperature, which drives anomalies in winds, weather and climate across the planet. Such departures from average conditions sometimes occur in predictable ways. For example, every three to seven years, the sea surface temperature along the equator in the Pacific Ocean warms by as much as two to three degrees Celsius. A warm El Niño climate pattern results, which changes rainfall and weather, from flooding in California to drought in Australia.

El Niño, and its opposite, La Niña, have long been recognized and can be predicted up to a year in advance. But there are other processes in the ocean that create variations in sea surface temperature and impact global weather and climate, and these are not well understood. Lamont-Doherty Earth Observatory physical oceanographer Ryan Abernathey and climate scientist Richard Seager, who are part of Lamont’s Center for Climate and Life, recently received funding from WSL PURE, the philanthropic arm of the World Surf League, to study these processes.

Abernathey and Seager are particularly interested in how changes in the ocean cause sea surface temperature to vary, and how these anomalies drive changes in atmospheric circulation to create extreme weather and climate conditions over land.

The scientists cite the ongoing California drought and heavy rain in northwest Europe as a motivating force behind this study. “When we came up with the idea for this research, we were thinking about winter 2013-2014, which set a record for billions of dollars of damage in the United Kingdom from flooding,” Seager said. “That record was soon beat by the winter of 2015-2016 due to the massive flooding that occurred in December of that winter.” 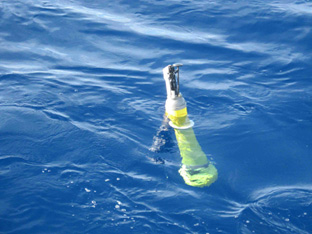 An array over 3,000 Argo floats is used to measure ocean temperature and salinity. Photo: NASA

To answer questions about how the ocean drives extreme weather, Abernathey and Seager are poring over more than 40 years of ocean data and models to identify changes in ocean currents and heat transfer between the ocean and the atmosphere. Among the data are new observations from the Argo array, a fleet of more than 3,000 autonomous floats that measure ocean temperature and salinity. These data may reveal exactly how ocean conditions have changed, and why the atmosphere seems able to sustain extreme weather events more easily than it could in the past.

“We know that sea-surface temperature changes can drive weather extremes, but we don’t know nearly enough about what drives these changes,” Abernathey said. “That is a fundamental question about ocean physics, which we can explore with simulations and data analysis.”

Abernathey and Seager are also investigating whether the changes in sea surface temperature are natural, man-made or a combination of the two, and how the probability of extreme weather is changing.

“Ultimately, we want to be able to predict these events and understand if such events are going to become more or less likely in the future, so there can be some kind of adaptation to them,” Seager said. “Informed decision-making requires knowing what to expect in terms of climate, both mean climate and these extreme events.”

Understanding how extreme weather events may change in frequency and severity will enable communities to better prepare for, and reduce the vulnerabilities associated with, events such as debilitating downpours and drought. The results of Seager and Abernathey’s research can be used to guide science-based adaptation strategies, which minimize the monetary costs and human suffering often associated with extreme weather.

Seager finds satisfaction in knowing that the results of this work can help communities with their adaptation efforts. “I love doing the basic science, but when there is societal relevance, it provides an extra motivation to really get the work done.”

The Center for Climate and Life was established at Lamont-Doherty Earth Observatory to mobilize scientists across disciplines to accelerate our understanding of how climate impacts the security of food, water, and shelter, and to explore sustainable energy solutions.