I Switch to Installing Seismometers 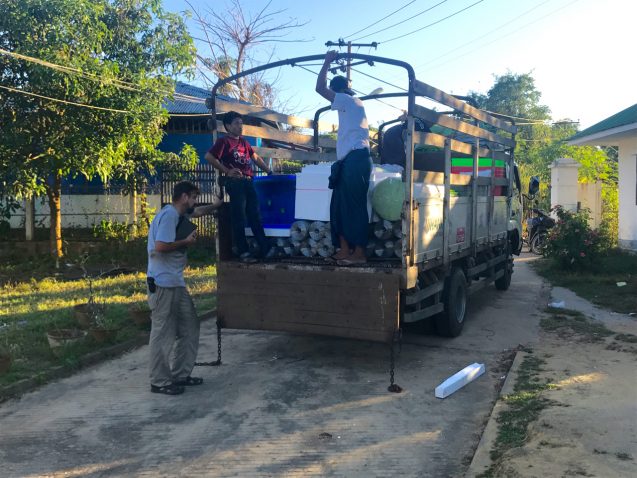 It was a long drive to Mandalay; we only had time for a quick late dinner after checking into a hotel. Unlike the spread out capital of Nay Pyi Taw, Mandalay is a real city with lots of linear streets, tall buildings and historic sites. We had no time to see any of it, but returned to Nay Pyi Taw the next morning to end the GPS installation. When we arrived, we met the 6-member U.S. seismic team that will install the seismometers in Myanmar for our project. They had just finished testing their 33 instruments. All but one worked. Another day of preparation and they would head to the field to start installing them. Keith flew home the next day since the GPS installation was done, but I joined the seismic team. I will stay with them until I have to head to Yangon of a conference. On the day we arrived, one of the trucks also showed up to carry the massive amount of equipment to local DMH offices to store them closer to where they will be deployed. The next day, the other truck taking the rest of the equipment came and was loaded up. Equipment for just one station remained for the entire group to install on the way to Shwebo, their first base. When the preparatory work was done, we watched “The Himalaya Connection”, the PBS documentary that covered our previous project in Bangladesh and India. The film makers will arrive later to film the seismic installations.

In order to be sure of having enough time for installing the first seismometer, we left at 6 am the next morning, stopping at a highway rest stop for breakfast. The roads were good and we arrived midday at the monastery. We had 10 people to do the installation, 3 Myanmari from our partners at DMH, 3 scientists from the University of Missouri, 2 from Louisiana State University, 1 engineer from PASSCAL, a facility that provides the equipment and technical support, and myself. With so many hands, the station was installed in only 2 hours. A broadband seismic station consists of three main components. The first is the seismic sensor, which is installed in a 3-foot hole that we had to dig. The bottom is leveled and then a ceramic tile is cemented to the bottom. The sensor is placed on the tile and oriented and leveled, then insulated with Styrofoam and fiberglass, then finally covered with metal plates, a tarp and dirt. The next piece is the equipment box that includes the recorder, a disk drive, batteries, and a power controller. It is covered with a tarp to protect it. The last piece is a solar panel mounted on a rebar frame similar to the ones that we used in Bangladesh. The GPS antenna for timing is usually attached to the solar panel. Finally a fence is built around the entire system for security.

We then drove to Shwebo and had a late lunch of Myanmar food. We sat down and they brought out small plates of about a dozen different dishes and soup to try. Soup is served at pretty much every meal including breakfast. It is commonly included on the table along with dipping sauces without ordering it. Traditional Myanmar meals include a few entrees and many side dishes. Our buffet had multiple meat and vegetable dishes to eat with rice. Our hotel is across the street from the DMH office in Shwebo, where our first stash of equipment was brought. We went over and loaded up the 3 SUVs. Each day, the group will split into 3 teams each installing a station. With the sensor and electronics in large padded carrying cases, one site’s equipment and tools, along with some spares,  fills the SUV. The three teams again took off again at 6 am to get to the sites and dig the holes before it became too hot. I went with Eric Sandvol, the leader of the seismic, who is team from Missouri, Rasheed, a graduate student at LSU, Joe from DMH and Aung, our driver. We had the farthest station and the longest drive, about 4 hours including a stop at a security checkpoint. These first stations are in a restricted area for foreigners, but we had permission. The people at the checkpoint were very friendly. I don’t think they get many foreigners. We continued on and the 3 cars diverged, each going to their respective sites.

We finally arrived at our site, a monastery that includes a large school. We were soon joined by an audience of many children, including monks in training. With only 4 of us and a heavy clay soil to dig through, it took about 3.5 hours to complete the job. In the heat, we were quickly covered in sweat and went through many bottles of water. We were all pretty worn out by the end. We rested, and ate some food we brought, noodles and a fried egg. At least partially refreshed, I spent the rest of the time taking pictures and movies of the giggling kids during their breaks from the classroom. Then it was time for the long drive back. Although we were the farthest, we were the second to arrive back at the DMH offices. One of the teams had some equipment problems that delayed them. We then had to reload the SUVs for tomorrow’s deployments, double checking with a list to be sure we had all of the dozens of individual components, from batteries to zip ties. When that was done, we could finally shower off the day’s thick layer of sweat and go to dinner.

While I will only do this for one more day, the rest of the group will continue repeating this pattern for another dozen days or so, matching west across Myanmar from one DMH office acting as a storage depot to the next until all 32 stations are successfully installed. Then they will go back across revisiting the stations and collecting the week or two’s worth of data to make sure that everything is working and to check the quality of each site.