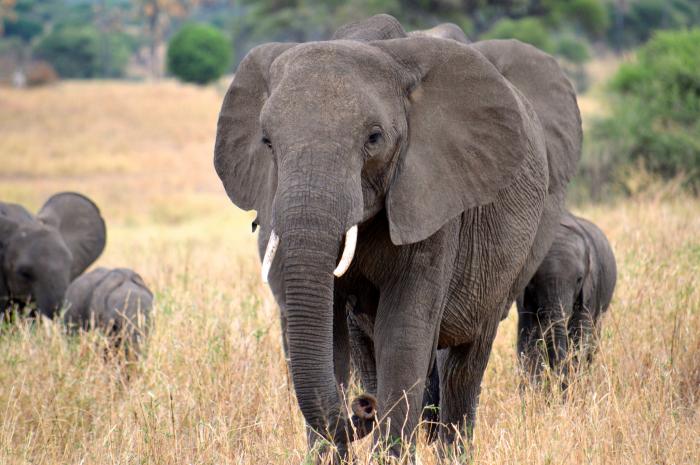 Researchers analyzing African elephant tusks seized by global law enforcement have confirmed what many suspect: the illegal ivory trade, now running in high gear, is being fueled almost exclusively by recently killed animals. In the first study of its kind, researchers showed that almost all tusks studied came from animals killed less than three years before the tusks were seized—many probably much more recently. The study bolsters evidence of widespread poaching, and undercuts the idea that many tusks are illegally recycled from older stockpiles built up by corrupt governments.

“It shows that ivory is moving through the system fast. Some of the elephants were killed just before their tusks were thrown in the shipping container,” said study coauthor Kevin Uno, a geochemist at Columbia University’s Lamont-Doherty Earth Observatory. “That has huge implications for our estimates of the number of elephants being taken.”

Tucked into the overall findings is an ominous trend: the lag time between killing and seizure, while still relatively short, has gone up. The trend started in 2011. Uno says that may indicate that smugglers are taking longer to acquire enough tusks for shipment, because there are fewer and fewer elephants left to kill. The study appears in this week’s Proceedings of the National Academy of Sciences.

Conservationists say poaching has soared in the last five to 10 years. The research provides support for a recent Africa-wide census saying that poachers killed off nearly 30 percent of Africa’s savannah elephants from 2007 to 2014, about 144,000 animals. This leaves an estimated 350,000 in 18 sub-Saharan countries. Another recent study estimates that from 2002 to 2013, poachers killed nearly two-thirds of the continent’s more reclusive forest-dwelling elephants. “This is another method of seeing what’s happening, independent of the elephant count. It corroborates the count,” said lead author Thure Cerling of the University of Utah. 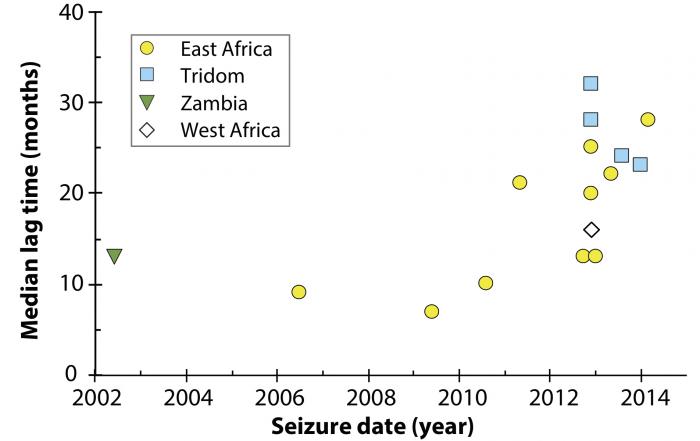 The researchers analyzed the ages of 231 tusks from large seizures made in nine nations from 2002 to 2014—the first such large-scale age study. To tell when the elephants died, they measured small amounts of the radioactive isotope carbon-14 left over from open-air nuclear-bomb tests in the 1950s and 1960s. The isotope ended up in plants that the animals ingested and used to build new ivory; the amount found in the most recently formed tissues provided a time stamp marking time of death. Uno first showed in a 2013 study that the method could be used to date elephant tusks. The most telling part is a pulp cavity at the base, where new ivory grows daily, pushing the tusk outward. The tusks used in the new study came from seizures in Kenya, Thailand, Hong Kong, Malawi, Malaysia, the Philippines, Singapore, Taiwan and Togo.

Before 2011, the time between the elephants’ deaths and seizure of their tusks hovered at 8 to 10 months. (These included one 2010 Kenya shipment in which the smugglers camouflaged the tusks with piled-up avocado skins.) But starting in 2011, the lag time ascended on a steep curve to two or three years, suggesting that smugglers were having an increasingly hard time finding enough product for large-scale shipment. The tusks have also been getting progressively smaller; most of the really big elephants have already been killed, said Uno. Black-market prices in China and elsewhere recently have been running around $1,000 a pound.

Using data from a previous DNA study by coauthor Samuel Wasser, the team also was able to tell where the elephants had lived. Through this, they discovered that tusks from East Africa were moving faster than those from other regions. This, said Uno, could be because East African elephants are exposed in open savannahs, where they can be shot down with abandon and the ivory shipped out quickly. In other regions, they dwell in dense forests, where they are harder to harvest en masse.

A longstanding treaty makes international trade in ivory from elephants killed after 1989 illegal, and many countries have stricter rules regarding domestic markets. In Canada, the prohibition starts in 1975; in the United States, the trade ban was recently made near-total. This has not halted the trade; in September, the owners of a New York City antiques store were arrested after investigators found an inventory of $4.5 million worth of carved ivory and whole tusks. Ivory seizures have soared; more than 40 tons have been seized since 2010. But conservationists and scientists have debated whether some of the seized ivory is actually looted by corrupt officials from government stockpiles made up in large part of previously seized ivory.

“It’s long been widely assumed that a lot of it was leaking from stockpiles,” said Elizabeth Bennett, vice president for species conservation at the Wildlife Conservation Society. “This shows that’s not true, and that’s very encouraging.” The finding has “huge implications” for policy and enforcement, she said. “It says that if we can stop the poaching, we can dry up the ivory pouring out of Africa,” she said.

Many governments have already been destroying seized tusks to keep them off the market. In recent years, at least 21 nations have crushed or burned large ivory stockpiles; earlier this year, Kenya cremated 105 tons. China and many other nations still have legal domestic ivory markets for supposedly old ivory, but Bennett says the study suggests much of the merchandise is new ivory masquerading as old. This may encourage countries to enact domestic bans as well. China and the European Union recently announced intentions to put such bans in place.

Cerling said that he hopes new ways of analyzing wildlife products can be used to both understand the sources of animal parts and strengthen enforcement. Similar methods could be used, for example, to pin down the provenance of other materials including walrus and rhinoceros ivory, pangolin scales, and illegally cut timber. A handful of criminal cases using Uno’s method have been prosecuted in Canada and elsewhere, but so far it has not come into wide use.