In February, a group of us went to Bangladesh to install equipment along to western side of our large geophysical transect across the IndoBurman subduction zone (red triangles on the map). This is the world’s only subduction zone that is entirely on land. Because of this and its slow rate of motion, it is often neglected or thought to not be active. However, we believe there is a significant earthquake hazard in this densely populated region. Thus, we developed this large project to study it using many geophysical and geologic tools.

We are now in the next stage of installing equipment for the project. I am in Myanmar to install five GPSes along the eastern side of the transect (white circles). Once again, Keith Williams, an engineer with UNAVCO, is with me to provide support. The seismic team, this time from the University of Missouri and Louisiana State University, will arrive in about a week to start their work installing seismometers at the green triangles. Keith and I will start installing GPS going from west to east along the transect. The seismic team will go east to west and we will cross and meet them later in the trip. 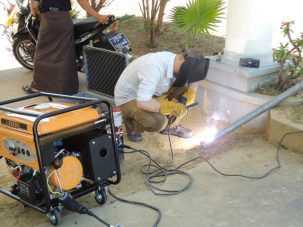 We have arrived in the Myanmar capital, Nay Pyi Taw, on the last day of a major Buddhist holiday, the Thadingyut festival. While the offices at our partners, the Department of Meteorology and Hydrology (DMH), are closed, stores are still open so we shopped for a few things, rested from the long flights and visited the Uppatasanti Pagoda. It is a copy of the famous pagoda in Yangon, the capital, but a foot shorter out of respect for the original. 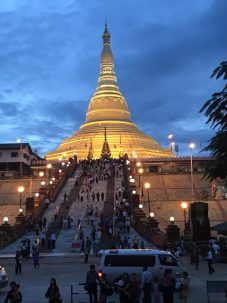 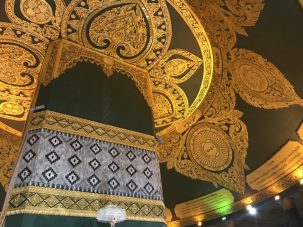 The following day, we were able to work with our partners at DMH on preparations for the fieldwork. We settled the bills for the things they bought for our work, checked our shipped equipment, got supplies, such as a sledge hammer, pieces to make a post pounder, locks and chains to secure the GPS, SIM cards for the modems in the GPSs, and a ladder. Along the way we drove on one of the amazingly wide roads here. There are 10 lanes in each direction, but we never saw more than about a half dozen cars in front of us. The new capital, only opened in 2006, is built on a huge scale and very spread out. As the center of the government, it now has over 900,000 people, but is not yet a vibrant city.

The GPSes that we will install are a lot fancier than the ones in your phone or car. They can measure positions to 2 millimeters, about 1/12 of an inch.  We will fix them securely to the ground and, over the years, we will be able to see the plates moving and strain building towards earthquakes.  After shopping, we sent the 12’ steel rods that we will use for building the GPS monuments, the batteries and the ladder off to be transported to our basecamp by bus. Today, we finished our preparations, rewiring the GPS and welding the post pounder to help drive the rods into the ground. Tomorrow, we start early in the morning for Kale or Kalay, our initial base of operations, a 12 hour drive away. The five GPS will be installed at a mixture of DMH offices and Buddhist monasteries. 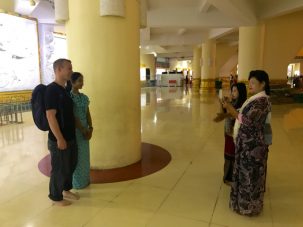 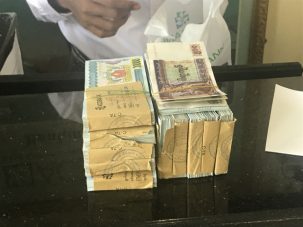 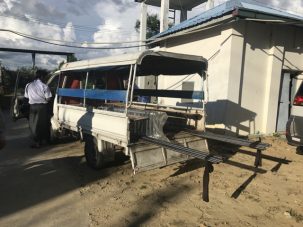