Investigating the World’s Oceans, Pole to Pole and Deep Below the Bottom

Scientists at Lamont-Doherty Earth Observatory, part of Columbia University’s Earth Institute, are working to understand past changes in the oceans as well as evolving conditions today. As the photos below illustrate, this pioneering work includes studies of climate change, earthquakes, sea-level rise, ocean chemistry and more.
With their vast resources and raw materials, the world’s oceans are one of the cornerstones of the quality of human life. According to World Bank figures, 350 million jobs are estimated to be linked to the oceans globally, and 1 billion people in developing countries depend on fish for their primary source of protein.

However, the oceans are increasingly endangered by unfettered exploitation and ecological damage from overfishing, noise, pollution, and acidification. Only 2 percent of the oceans are protected areas. Ninety percent of big predators are gone. Thirty-eight percent of coral reefs have been destroyed since 1980, according to the latest figures published by the United Nations Environment Program.

The Earth Institute recently co-sponsored a conference on the use and protection of the world’s oceans. The conference, focused on maritime policies, was the second in a series of European-U.S. gatherings organized by the Dräger Foundation in Lübeck, Germany.

The conference came on the heels of detailed discussions about the fate of the oceans at the UN Conference on Sustainable Development, held in Rio de Janeiro last month. While many felt the final agreement produced by that gathering did not go far enough, the member states did pledge to work to better enforce international agreements intended to protect the ocean environment and biodiversity, and to encourage the sustainable development of ocean resources.

For more on the Drager Foundation’s series on ocean policy, “Sustainable Oceans: Reconciling Economic Use and Protection,” visit
the Dräger Foundation’s website. For a look at the final outcome document from the Rio conference,
visit the Rio+20 site. 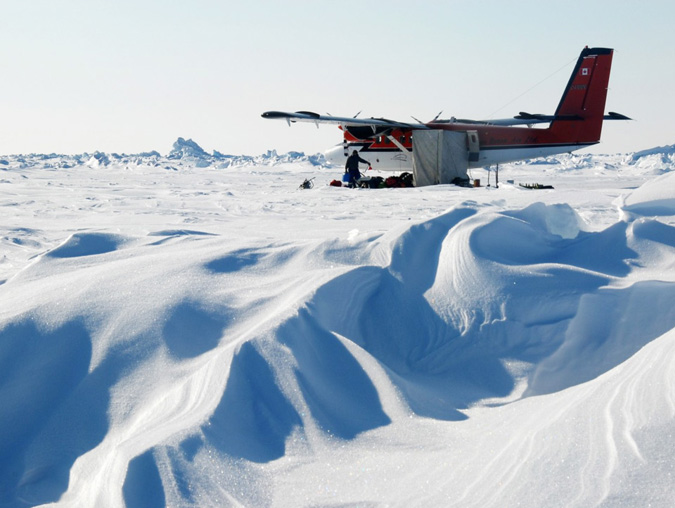 In the central Arctic Ocean above Canada, Lamont scientists on the multi-year Arctic Switchyard project are studying the effects of melting sea ice and glaciers on ocean circulation and climate. A small plane flies them to sites on the sea ice. Thin patches and mounds of wind-blown snow can make landings tricky. (Dan Greenspan) 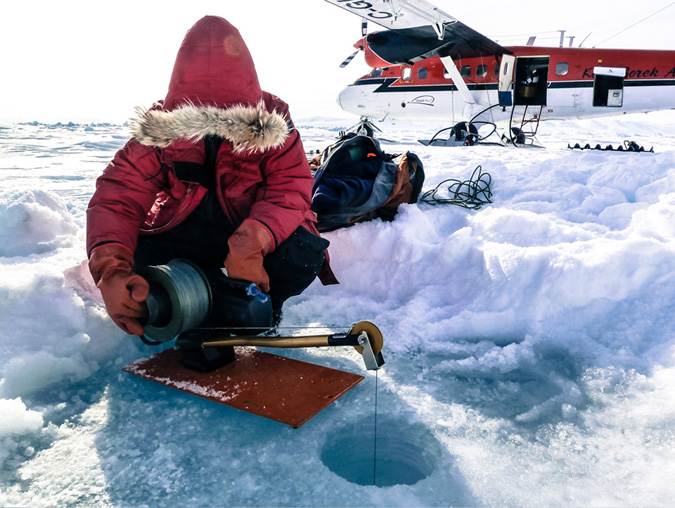 From holes drilled into the ice, the scientists collect samples of water from the sea below to learn about currents and chemistry. Here a researcher measures salinity and temperature. (Ronny Friedrich) 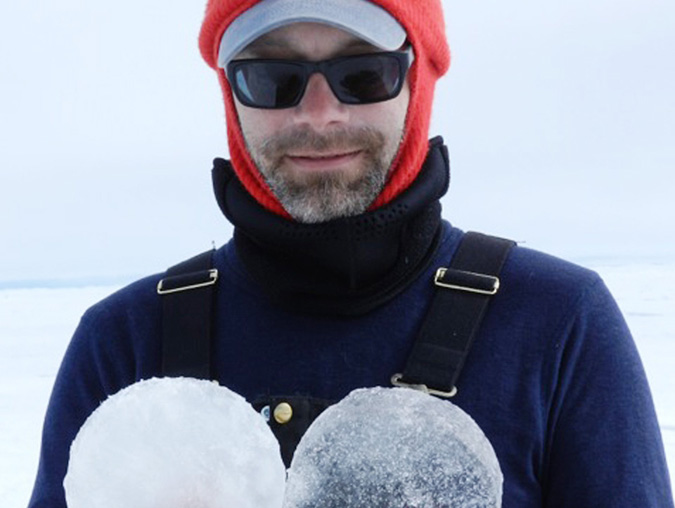 Warmer temperatures and melting sea ice are reshaping Arctic life. Will the food web adapt? Lamont-Doherty researchers are drilling into the sea ice off northern Alaska to study the tiny plants and animals that grow below. Microbiologist Andy Juhl with newly collected samples. (Brittany Held) 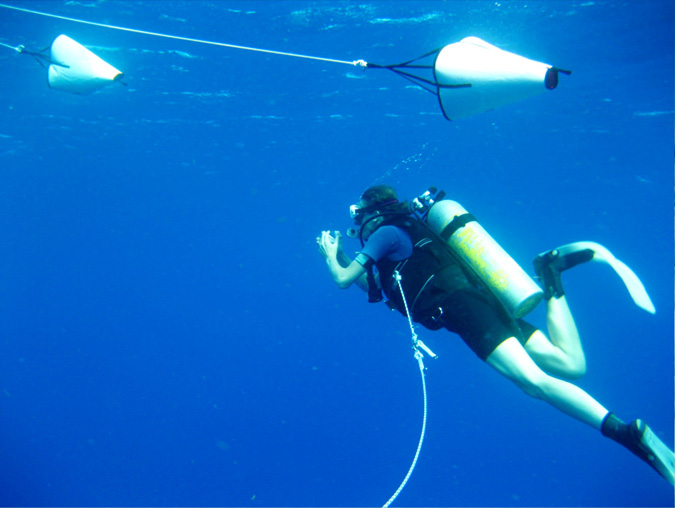 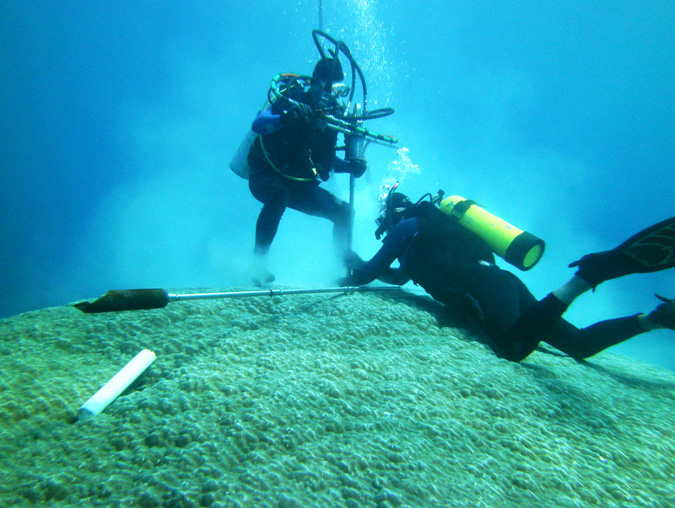 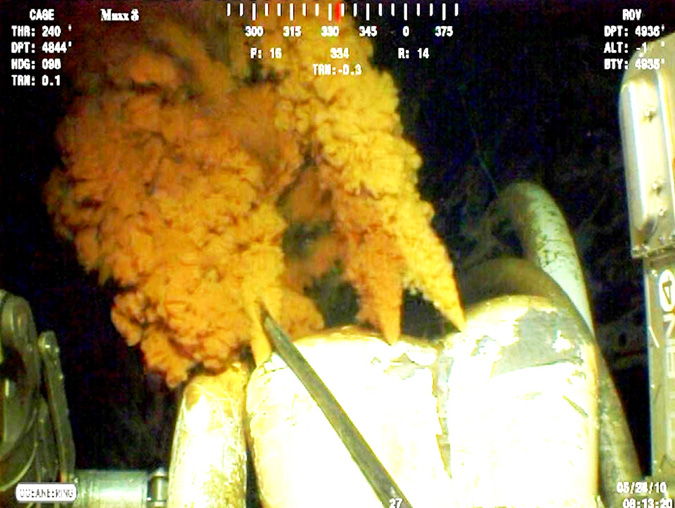 The 2010 explosion of the Deepwater Horizon oil rig in the Gulf of Mexico triggered the worst oil spill in U.S. history. By analyzing video footage of the well, Lamont scientist Timothy Crone and his colleagues calculated that 10 times more oil was flowing than the U.S. government initially estimated. Their estimate was later confirmed. 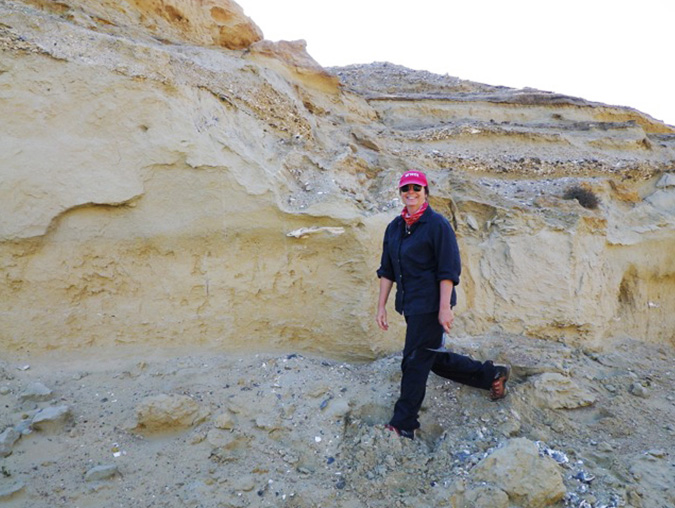 On a warmer planet, 3 million years ago, sea levels were higher, and waves lapped what are now sandy cliffs in South Africa. Lamont-Doherty scientist Maureen Raymo is studying such ancient shorelines to understand how high the seas rose then, and how high they might climb in the future. (Paul Hearty) 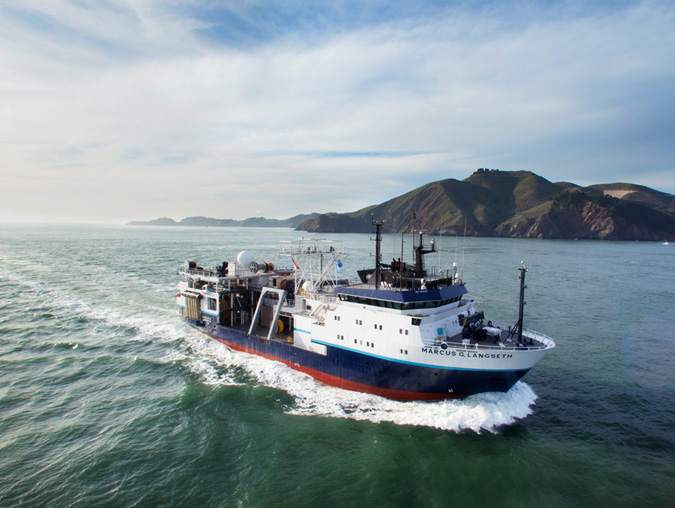 The
R/V Marcus G. Langseth, owned by the National Science Foundation and operated by Lamont-Doherty, is the U.S. academic community’s premier research ship for studying the sub-seafloor using seismic pulses. It recently imaged the tectonic zone off the U.S. Northwest, which is capable of producing giant earthquakes and tsunamis. 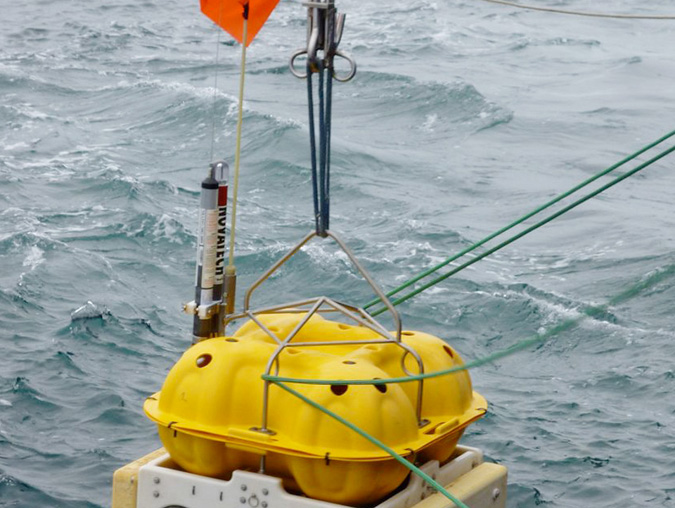 On some Langseth expeditions, seismometers are lowered to the ocean floor–here, off southern Alaska, where another great earthquake zone lies. The seismometer will record sound waves released by the ship, allowing scientists to image earth’s deep structures. (Donna Shillington) 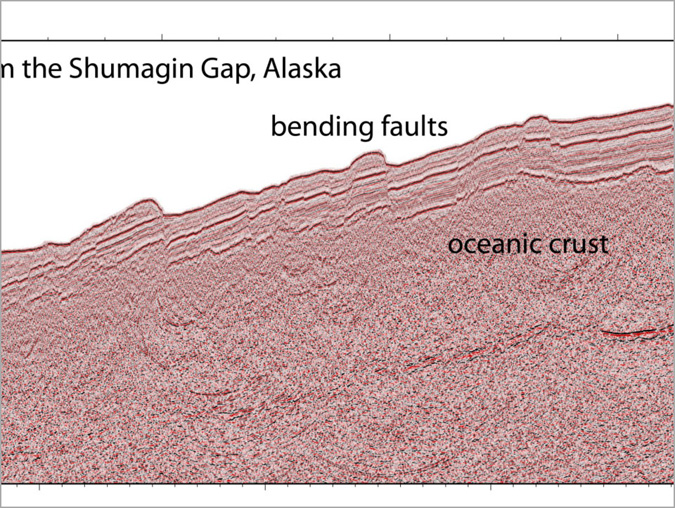 The sound waves produce images of what lies below the seafloor, including folds and faults. This helps scientists understand both basic evolution of the seafloor, and the seismic hazards it may pose. (Donna Shillington)

Like a series of other ships Lamont has operated since the 1950s, the Langseth also takes physical samples of the ocean floor. Here, a piston corer is readied for lowering to the bottom of the central Pacific Ocean, near the Line Islands, to grab sediments below. (Pratigya Polissar) 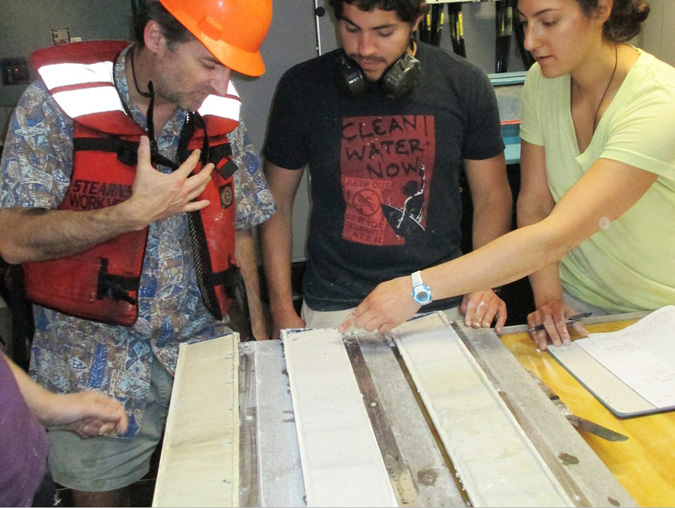 Onboard, cores may be split open for inspection. The oldest sediments recovered on this cruise go back 350,000 years. Colleagues from Boston University, the University of California and Brown University discuss a fresh core. (Pratigya Polissar 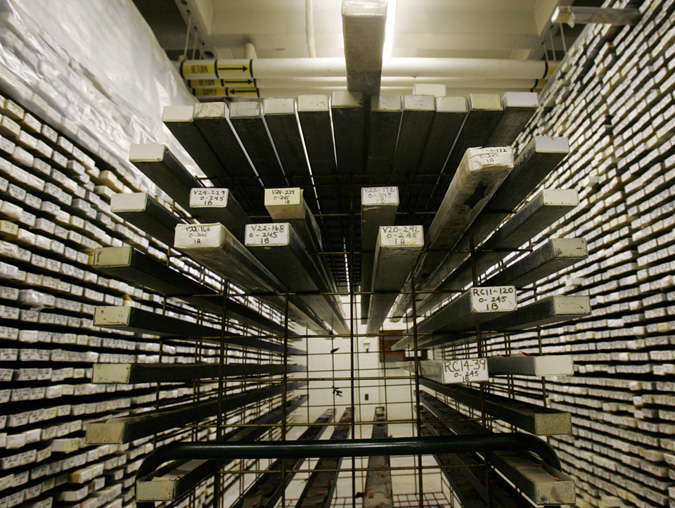 Cores from around the world are archived at the Lamont Core Repository–the most extensive collection of deep sea sediments on earth. They are loaned to scientists worldwide for study, sometimes decades after they were collected. (Francesco Fiondella) 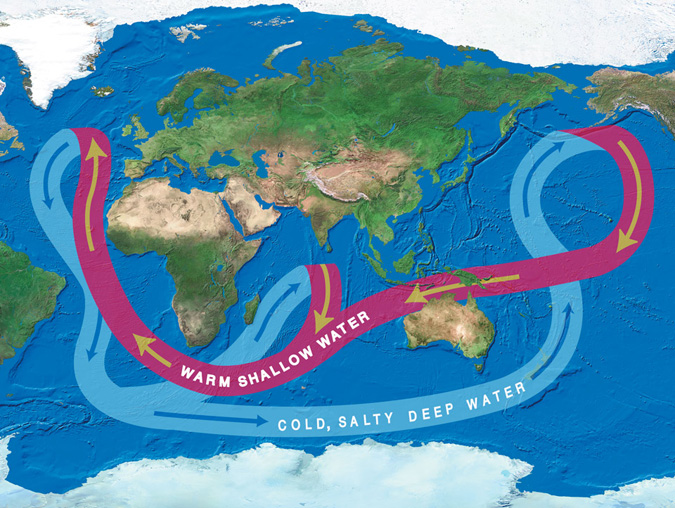 Over the years, senior Lamont-Doherty scientist Wallace Broecker has contributed key studies showing the workings of what has become known as the “Great Ocean Conveyor”—a series of interlocking currents, on and below the surface, that play a key role in climate. 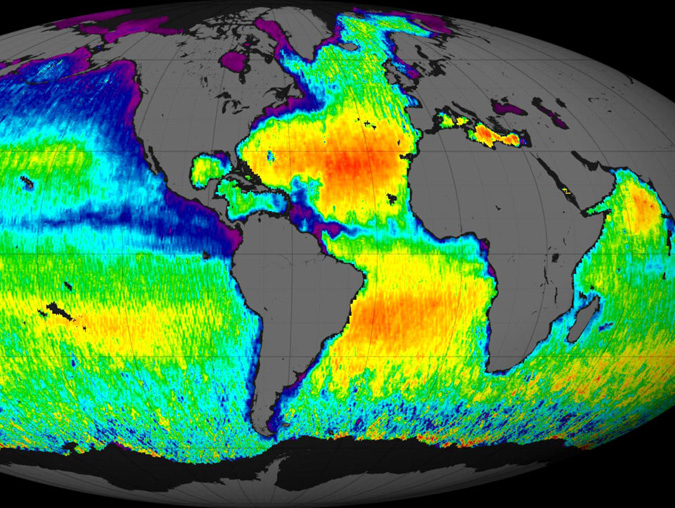 Salt levels vary widely by region; these are also interlocked with climate. Lamont oceanographer Arnold Gordon and others are involved in NASA’s Aquarius mission to map salt levels from space to improve our understanding. (NASA) 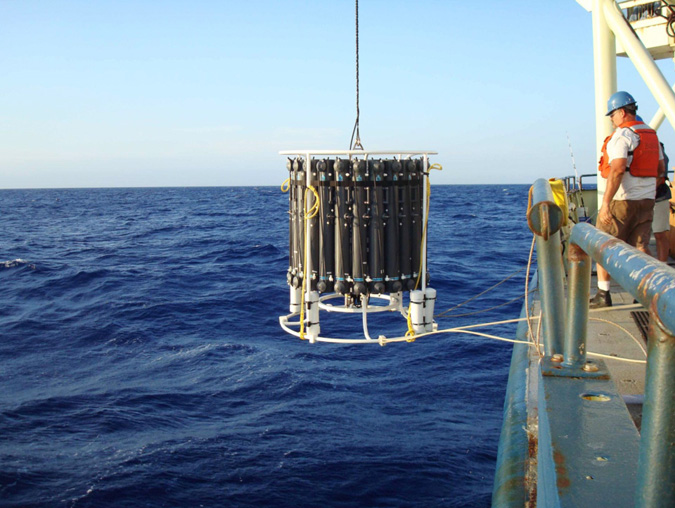 Lamont is participating in the 30-nation GEOTRACES program, which is mapping the global distribution of trace elements key to biological and physical processes, and how these are changing with environmental conditions. Here, sampling bottles are lowered south of Bermuda. 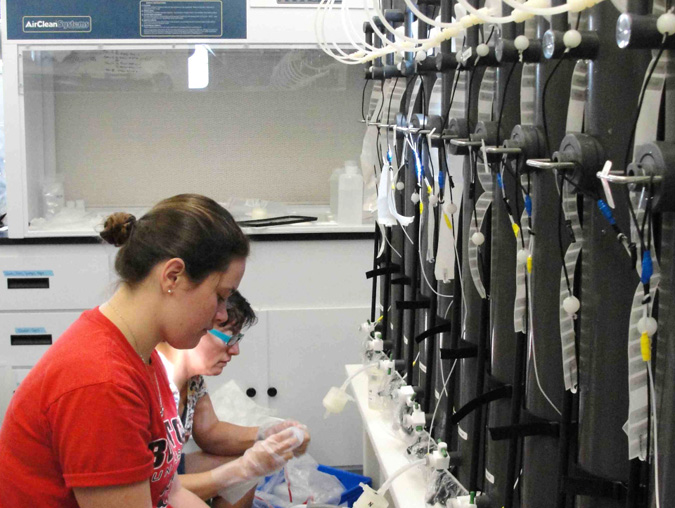 Water samples brought up from the depths are analyzed in sophisticated shipboard labs. Here, water gathered near the Atlantic Ocean’s Cape Verde Islands is removed from bottles. 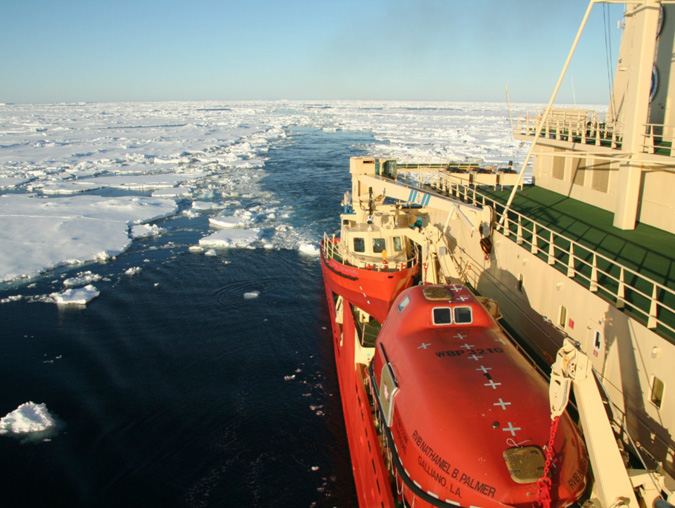 Lamont-Doherty researchers are also studying climate change in Antarctica. In 2009, the ice-breaking ship
R/V Nathaniel B. Palmer traveled to the Amundsen Sea to investigate the massive Pine Island Glacier, which in recent decades, has been accelerating its slide into the sea. (Frank Nitsche) 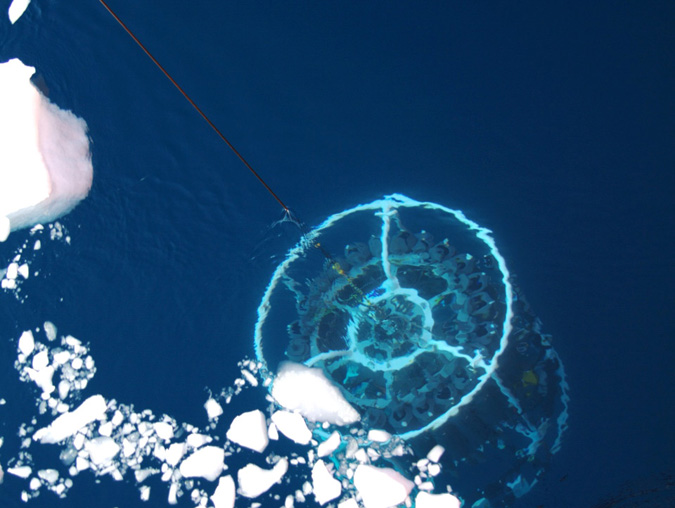 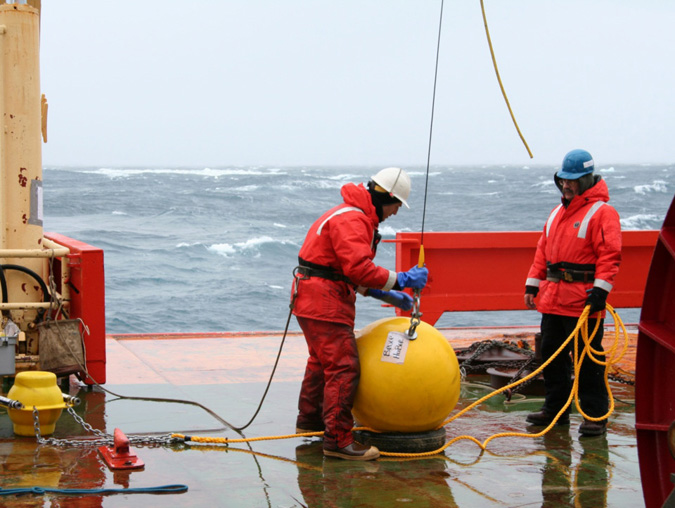 Moorings left on the ocean floor for a year or longer are retrieved by returning ships. Sensors in them continuously record temperatures and passing currents, in this case, in Antarctica’s Ross Sea. Lamont scientist Bruce Huber is at right. (Frank Nitsche) 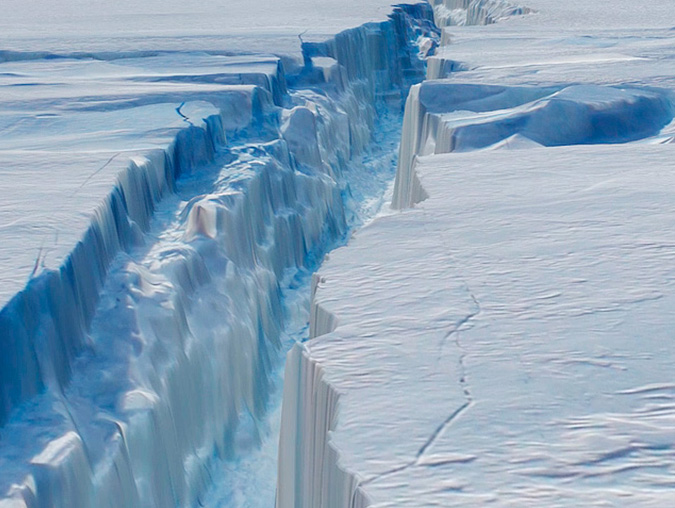 In the NASA-led mission Operation IceBridge, Lamont scientists are flying over both Greenland and Antarctica with geophysical instruments to see what is happening within and below the ice. In a flight over Antarctica’s Pine Island Glacier in fall 2011, scientists witnessed a New York City-size iceberg in the making, with a 19-mile crack tearing the ice apart. (NASA)
Media Inquiries:
Kevin Krajick
kkrajick@ei.columbia.edu
(212) 854-9729
Tags:
Biological Oceanography
Chemical Oceanography
inter-ocean dynamics