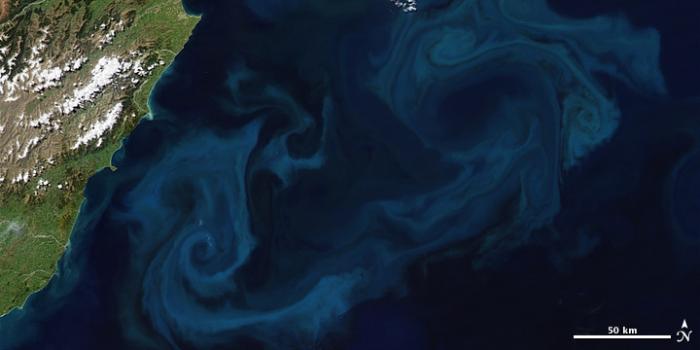 Over the past half-million years, the equatorial Pacific Ocean has seen five spikes in the amount of iron-laden dust blown in from the continents. In theory, those bursts should have turbo-charged the growth of the ocean’s carbon-capturing algae­ – algae need iron to grow – but a new study shows that the excess iron had little to no effect.

The results are important today, because as groups search for ways to combat climate change, some are exploring fertilizing the oceans with iron as a solution.

Algae absorb carbon dioxide (CO2), a greenhouse gas that contributes to global warming. Proponents of iron fertilization argue that adding iron to the oceans would fuel the growth of algae, which would absorb more CO2 and sink it to the ocean floor. The most promising ocean regions are those high in nutrients but low in chlorophyll, a sign that algae aren’t as productive as they could be; the Southern Ocean, the North Pacific, and the equatorial Pacific all fit that description. What’s missing, proponents say, is enough iron.

The new study, published this week in the Proceedings of the National Academy of Sciences, adds to growing evidence, however, that iron fertilization might not work in the equatorial Pacific as suggested.

Essentially, earth has already run its own large-scale iron fertilization experiments. During the ice ages, nearly three times more airborne iron blew into the equatorial Pacific than during non-glacial periods, but the new study shows that that increase didn’t affect biological productivity. At some points, as levels of iron-bearing dust increased, productivity actually decreased.

What matters instead in the equatorial Pacific is how iron and other nutrients are stirred up from below by upwelling fueled by ocean circulation, said lead author Gisela Winckler, a geochemist at Columbia University’s Lamont-Doherty Earth Observatory. The study found seven to 100 times more iron was supplied from the equatorial undercurrent than from airborne dust at sites spread across the equatorial Pacific. The authors write that, although all of the nutrients might not be used immediately, those nutrients are used up over time, so the biological pump is already operating at full efficiency.

“Capturing carbon dioxide is what it’s all about: does iron raining in with airborne dust drive the capture of atmospheric CO2? We found that it doesn’t, at least not in the equatorial Pacific,” Winckler said.

The new findings don’t rule out iron fertilization elsewhere. Winckler and coauthor Robert Anderson of Lamont-Doherty Earth Observatory are involved in ongoing research that is exploring the effects of iron from dust on the Southern Ocean, where airborne dust supplies a larger share of the iron reaching the surface. 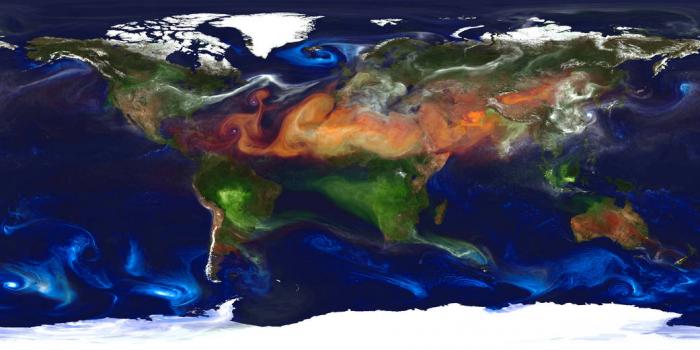 Past experiments with iron fertilization have had mixed results. The European Iron Fertilization Experiment (EIFEX) in 2004, for example, added iron in the Southern Ocean and was able to produce a burst of diatoms, which captured CO2 in their organic tissue and sank to the ocean floor. However, the German-Indian LOHAFEX project in 2009 experimented in a nearby location in the South Atlantic and found few diatoms. Instead, most of its algae were eaten up by tiny marine creatures, passing CO2 into the food chain rather than sinking it. In the LOHAFEX case, the scientists determined that another nutrient that diatoms need – silicic acid – was lacking.

The Intergovernmental Panel on Climate Change (IPCC) cautiously discusses iron fertilization in its latest report on climate change mitigation options. It also warns of potential risks, including the impact that higher productivity in one area may have in sapping nutrients needed by marine life downstream, and the potential for expanding low-oxygen dead zones, increasing acidification of the deep ocean, and increasing nitrous oxide, a greenhouse gas more potent than CO2.

The PNAS paper follows another paper Winckler and Anderson coauthored earlier this year in Nature with Lamont graduate student Kassandra Costa looking at the biological response to iron in the equatorial Pacific during just the last glacial maximum, some 20,000 years ago. The new paper expands that study from a snapshot in time to a time series across the past 500,000 years. It confirms that Costa’s finding, that iron fertilization had no effect then, fit a pattern that extends across the past five glacial periods.

To gauge how productive algae were in the past, the scientists in the new PNAS paper used deep-sea sediment cores from three locations in the equatorial Pacific that captured 500,000 years of ocean history. They tested along those cores for barium, a measure of how much organic matter is exported to the sea floor at each point in time, and for opal, a silicate mineral that comes from diatoms. Measures of thorium-232 reflected the amount of dust that blew in from land at each point in time.

"Neither natural variability of iron sources in the past nor purposeful addition of iron to equatorial Pacific surface water today, proposed as a mechanism for mitigating the anthropogenic increase in atmospheric CO2 inventory, would have a significant impact," the authors concluded. The other co-authors of the paper are Samuel Jaccard of the University of Bern, Switzerland, and Franco Marcantonio of Texas A&M University.

“While it is well recognized that atmospheric dust plays a significant role in the climate system by changing planetary albedo, the study by Winckler et al. convincingly shows that dust and its associated iron content is not a key player in regulating the oceanic sequestration of CO2 in the equatorial Pacific on large spatial and temporal scales,” said Stephanie Kienast, a marine geologist and paleoceanographer at Dalhousie University who was not involved in the study. “The classic paradigm of ocean fertilization by iron during dustier glacials can thus be rejected for the equatorial Pacific, similar to the Northwest Pacific.”