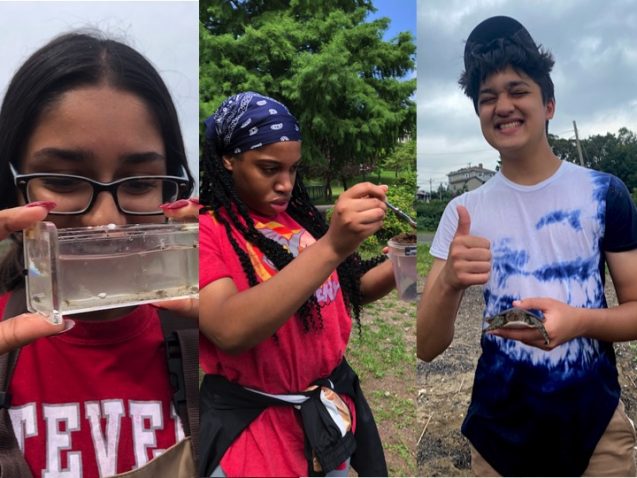 Today’s bloggers are (LtoR) Shania Ninan, Sarah-Gail Harvey and Talha Uddin. Here they are exploring environmental science on the banks of the Hudson River this summer.

Environmental resources are often not allocated equitably, and in some instances, almost non-existent for communities of color when it comes to access to nature and environmental protection of these resources. The Next Generation of Hudson River Educators program of the Lamont-Doherty Earth Observatory (Lamont’s Next Gen) spent a week of the program focusing on local and global environmental injustice. Students learned about the disproportionate environmental impacts faced by marginalized BIPOC (Black, Indigenous, and People of Color) communities due to the development of highways that disconnects communities, industry and transit that degrade air and water quality, and the destruction of natural greenspace that offers a multitude of ecosystem services to the residents. This year’s interns were immersed in lectures, Ted-Talks, in-person debates, interactive activities and discussions surrounding topics of climate change and environmental racism.

Below three of our students summarize their experience in learning about environmental justice.

We Possess the Power to Attain Environmental Justice 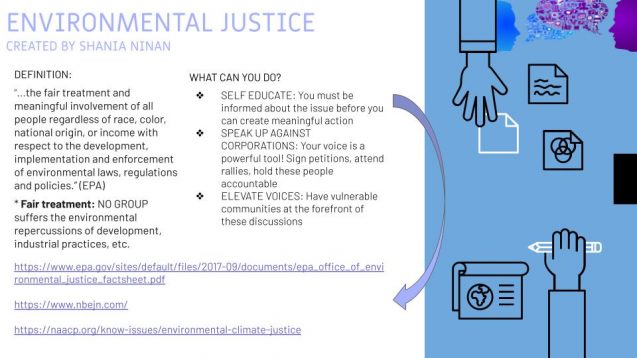 “What does environmental justice look like to you?” The first question of the day on a Monday morning Zoom call caught me off guard. Part of me was tempted to write pages and pages describing this idealistic utopian society while the other part of me could only produce a few words. A society where all people regardless of race, socioeconomic status, culture, sexual orientation, language, etc. can live with the resources and protection necessary to survive. It seems like such a simple concept: everyone lives under their inalienable birth rights. But unfortunately, environmental injustice is a prevalent issue in areas all across the globe. 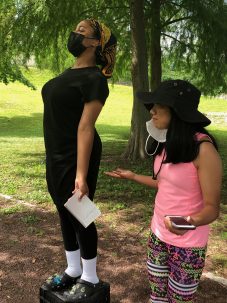 CAPTION: Students debate the construction of a Stony Point power plant being developed in an ethinic, low income community. We examined the situation from an environmental and/or economic perspective.

The environmental justice movement has expanded over the past year, but are we as a community truly doing enough? This summer, Lamont’s NextGen examined this issue of environmental injustices both locally and on a global scale through captivating TedTalks, heavy conversations and debates, readings, etc.

Perhaps one of our most meaningful experiences was watching Majora Carter’s Greening the Ghetto TedTalk. Following the video, the discussion was short, not because we had nothing to contribute, but because of how powerful her message was. The combination of her intense demeanor and inspiring message and life stories forced us to truly sit back and reflect on this ongoing issue.

Carter discusses how those in positions of power are notorious for prioritizing the conditions of our economy, even if it’s at the expense of our people and environment. And who suffers the consequences of such choices? Marginalized communities. Local communities are infiltrated with long term development and infrastructure which have the potential to contaminate vital resources. Hearing her experiences living in areas around New York City which have become subject to such development was emotional, but Carter concludes her message by reminding us of the power we all possess; the power to influence decision makers and have the conversations similar to those that I’ve had over the past few weeks at Lamont.

Through my Lamont Next Gen experience, I have learned that recognizing our capacities to create tangible change is half of the process. Making our aspirations a reality is the next step.

Fighting the Enduring Legacy of The Practice of Redlining

One of THE BEST Ted Talks I have ever listened to was one done by Majora Carter entitled “Greening the Ghetto” (linked above in Shania’s piece) Majora was born and raised in NYC and is in the process of creating change for the South Bronx in terms of environmental justice. Environmental justice is a topic that is not widely discussed in the news or even on social media. It has recently risen to the surface because of all of the social unrest that has been ravaging our nation. It has also recently become a passion of mine, as I endeavor to share my desire for change and equality in certain communities. I am a fellow Bronx native and also a young woman of color. Carter’s experience and tenacity towards her cause makes me feel empowered to fully understand redlining and what it means for communities that have mostly BIPOC (Black, Indigenous and People of Color) residents.

According to the definition “In the United States, redlining is the systematic denial of various services to residents of specific, often racially associated, neighborhoods or communities, either explicitly or through the selective raising of prices” (Wikipedia). Unfortunately, redlining has a long history, and has made a negative impact on many marginalized communities. Local waterfront communities like Poughkeepsie, NY and Hoboken, NJ are examples of places that were redlined, where people were once hesitant to live as they were considered hazardous or high risk. 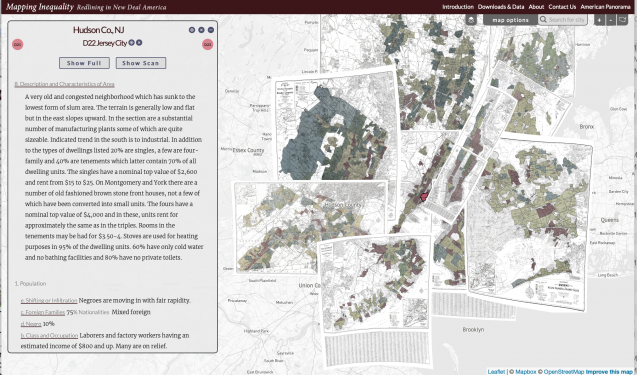 Railroads and air pollution have in the past deterred people from being interested in living in these areas. However with the clean up and attraction of the Hudson waterfront, gentrification has taken place. That is, wealthier families have moved in, realizing the worth and desirability of living along the waterfront, and this has pushed up housing costs and forced out longtime residents who may not have recognized the value of what they had. Marginalized communities do not always have access to information about their environment, and therefore sometimes lack enthusiasm to fight for it. After all, how can you fight for something you have no knowledge of? We must be more diligent in doing our research so that we can effectively protect what’s ours.

It is not fair that certain communities miss out on funding and support simply because of the income bracket and race of its members. As long as I have the ability to, I will advocate for the Bronx and other communities that experience this treatment. I want to give a special shout-out to Lamont’s Next Gen Program for conveying their interest in pushing for environmental justice for all.

From climate change to climate justice, the International Research Institute for Climate and Society (IRI) lessons provided insightful information about the wider world around us. Initially established as a cooperative agreement between NOAA’s Climate Program Office and Columbia University’s, Earth Institute, IRI is located at the Lamont Campus. Their mission felt both impressive and intimidating “to enhance society’s capability to understand, anticipate and manage the impacts of climate in order to improve human welfare and the environment through strategic and applied research, education, and capacity building.”

I, along with the rest of the interns in the Lamont’s Next Gen program, gained a range of detailed climate information and can gladly say we were delighted to be part of the experience. Through our online seminars, we discussed topics that are often overlooked by mainstream media such as climate inequality and environmental justice around the world. I was introduced to terminology I wasn’t familiar with before, such as redlining (see Sarah-Gail’s piece above), and statistics like 56% of populations living near toxic waste sites are people of color. These were just small examples of the big takeaways I took from being part of these lessons.

One lesson in particular that was not only engaging but overall insightful was when we were asked to create our ideal utopian societies. Our goal was to create an area that was environmentally friendly, including more renewable energy sources and better alternatives to the way we live today. My peer and friend Kaitlyn Canivel, was gracious enough to allow me to include her drawing to show an example of her idea of a utopian society: 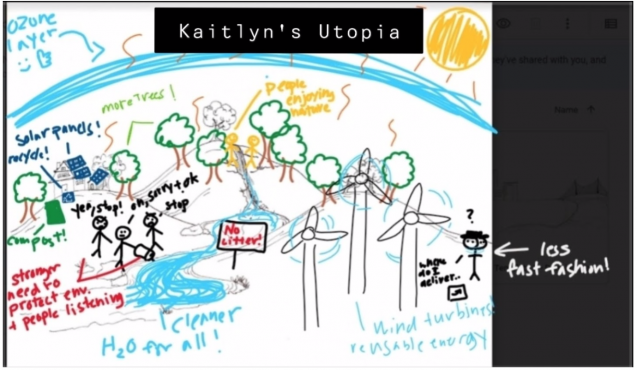 Kaitlyn Canivel’s idea of a utopian society in which renewable energy is used instead of any carbon emissions providing an insight as to steps that can be taken to live more eco-friendly.

Kaitlyn also provided some insights as to what each thing in her drawing represents. Overarching the whole image is the sun’s heat energy shown as orange lines, just below the blue lines show the ozone layer with its smiley face and thumbs up representing hope and optimism for a healthier Earth with reduced global warming and a more sustainable future.

The trees are a way to address global warming through carbon capture. She explains that trees serve as a positive symbol that provides Greenspace and increased environmental equity to communities still being impacted by the effects of redlining, a government and lender practice of withholding loans based on racial demographics. Greenspace provides multiple ecosystem services, including natural space for residents to recreate, and shade to cool down urban communities that suffer from the huge heat disparity that BIPOC (Black, Indigenous and People of Color) communities face.

The yellow stick figures illustrate the residents connecting and enjoying nature. Kaitlyn shares that currently the parks in her community are used less in comparison to other parks in Rockland County due to rumors of gang violence. The Amazon delivery person’s head is spinning in confusion because there is no one to accept their packages, symbolizing a community that does not support fast fashion or unsustainable products. Wind turbines, solar panels, and other sources of renewable energy were included supporting a healthy world for future generations. Our planet is our home. We need to turn these ideas into realities if we want our future to be bright and sustainable. IRI lessons were so impactful because they shed light on climate change issues that are not discussed enough. They helped me realize the importance of being educated on these topics leaving me feeling empowered to spread this information to others!

The mission of Lamont’s Next Generation of Hudson River Educators program is to provide high school students from under-represented communities a platform to engage and gain a passion for the environmental sciences. This prerogative then fuels these students to take what they have learned in the program and communicate that information back into their communities. Engaging students from these communities fuels a fire for more youth to get involved in the sciences and create powerful change.

—Introduction and conclusion written by Charity Dikson and Marisa Annunziato, undergraduate near peer mentors from the Rockland Conservation & Service Corps.

Lamont’s Next Generation of Hudson River Educators Program is a program funded through a grant from the NYS DEC, with support from Old York Foundation, the Henry L. and Grace Doherty Charitable Foundation, Inc. and additional student support from the NSF INCLUDES program. For six weeks this summer the program ran a hybrid format with 2 field days (with teams in both Piermont and Haverstraw NY) and 3 virtual days each week. Eight high school students joined two Rockland Conservation Corps members and Lamont’s Laurel Zaima and Margie Turrin for an in depth experience.