Jay Ardai: A Real MacGyver for Ice and Ocean Research 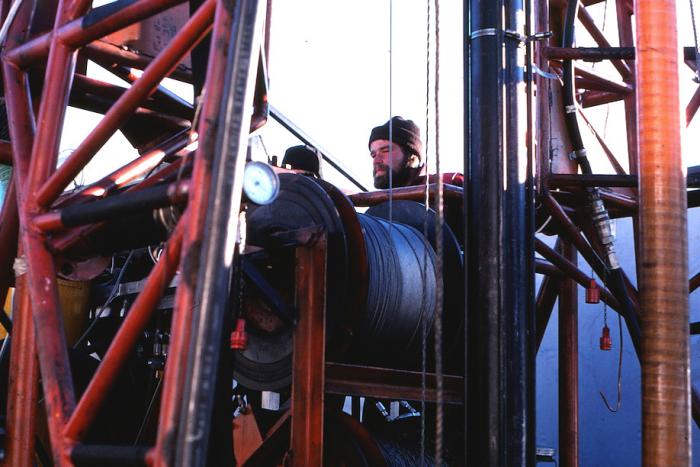 Jay Ardai, a technician who retrofitted ships for research use and ran ice camps for Lamont scientists, was known for his ability to fix anything and for his generosity. Here he helps a CRREL team with their rig in Antarctica. Photo courtesy of Stan Jacobs.

Jay Ardai was the guy you wanted in your sea ice camp after the ship left, or in the Alaska wild when your plane had mechanical trouble. He earned his reputation in remote locations like these as a super-technician who could fix anything using whatever he could find.

Ardai, who passed away on March 13 at age 65 after a long battle with cancer, started his career as an engineer, but he fell in love with scientific fieldwork at what was then Lamont-Doherty Geological Observatory.

Throughout his career, Ardai led logistical and technical support for many ice camps and research cruises, spending months at a time in the Arctic and Antarctic. He designed, built, and operated scientific equipment, including remote-sensing instruments, large oceanographic winches, and hot-water drills for melting access holes through floating ice. He also supervised the repair and retrofitting of Lamont research vessels, particularly the design, planning, and installation of scientific systems in ships, including the R/V Maurice Ewing.

“He was known to be a jack of all trades, a super technician who could fix almost anything,” said Lamont oceanographer Stan Jacobs, who worked with Ardai for many years. “He was absolutely indispensable if you were going to sea or out on the ice.”

Colleagues describe Ardai as quiet, modest about his accomplishments, and generous with his skills and his time. Jacobs recalled that during one Ross Ice Shelf expedition in the 1970s, after the Lamont team finished their work, Ardai offered to help a nearby crew from CRREL (Cold Regions Research and Engineering Laboratory) solve some coring challenges they were facing. He helped them fix the mechanical issues, then worked with them to help the team catch up for lost time.

Lamont marine geologist Bill Ryan recalled that “Jay played a pivotal role in the design, fabrication, and at-sea operation of equipment for Lamont’s involved in the search for the Titanic in the early 1980s. He was skilled in machining delicate parts for deep-sea cameras as well as a huge winch capable of holding up 10 kilometers of electro-mechanical cable and with a perfect level-winding capability.”

In 1991-92, Ardai was the U.S. technical coordinator in the Weddell Sea Ice Camp, a joint American-Russian research project into sea-ice-air interactions in the waters east of the Antarctic Peninsula, when they discovered their helicopter fuel was contaminated. With the 5-month mission in jeopardy, Ardai orchestrated a supply drop onto the drifting ice. 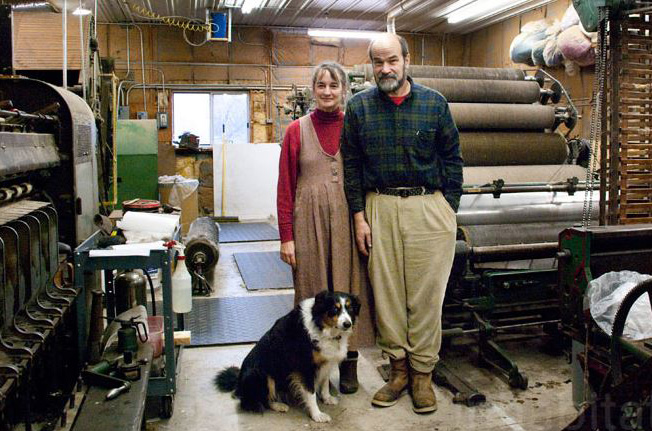 Jay Ardai and Suzanne O'Hara in the woolen mill they restored near Genoa, N.Y. after Ardai retired. Photo courtesy of Amanda Silvana Coen.

Ardai’s thank you note for the supply drop, written with Lamont’s Doug Martinson and quoted in the Antarctic Journal of the United States, reflected the risks in the kind of environments where Ardai excelled: “In this highly active region of sea ice, there is always a chance that some of [the] rifts in the ice floe would develop through the camp itself,” they wrote. “If such a situation were to develop, use of the helicopters could prove invaluable in relocating the camp to a safe region.”

When he retired from Lamont about 15 years, ago, Ardai embarked on a new adventure, one that would allow him to spend time at home – on land. He and his long-time partner, Lamont systems analyst and programmer Suzanne O’Hara, purchased a woolen mill and farm in Genoa, in the Finger Lakes region of New York, and Ardai set about restoring the old equipment and getting the mill running again. A 2011 InHabitat article and photo slideshow share the story of their farm.

“Jay was so popular because if he was in an environment where you couldn’t just go to Lowe’s, he could fix just about anything,” O’Hara said. “When he moved up here, he used his expertise to help the farmers living around us. Because of what he knew, he was fixing equipment in people’s dairies and their combines.”

Ardai participated in the local Quaker community around Genoa and enjoyed restoring 100-year-old tractors and running the mill and their 150-acre organic farm, O’Hara said. The couple, strong believers in sustainability, would make their own milk, cheese, and butter, as well as maple syrup. “He found it fascinating to keep it all running and have it ready to pass on to the next generation,” O’Hara said.

Ardai was born Jose Lobo Ardai, Jr., on July 6, 1950, in Washington, D.C., and grew up in nearby Falls Church, Virginia. He graduated from George Mason College of the University of Virginia in 1972 with a bachelor’s degree in physics and joined Lamont soon afterward.