John Imbrie, a Pioneer of Paleoceanography

The field of paleoceanography emerged in the middle of the last century as scientists began collecting large numbers of deep-sea sediment cores and figuring out how to date the layers that had recorded Earth’s climate history. John Imbrie was one of its pioneers.

Imbrie, a scientist at Columbia University from 1952 to 1967 and former head of the Department of Geological Sciences (now the Department of Earth and Environmental Sciences), contributed to a legacy of innovative techniques that came together at Lamont-Doherty Earth Observatory and turned paleoceanography into an important science for understanding Earth’s changing climate. He died on May 13, 2016, at the age of 90.

Imbrie was perhaps best known for being a co-author of the 1976 “Pacemaker” paper, in which Lamont’s Jim Hays, Imbrie, and Nicholas Shackleton of Cambridge used sediment cores to confirm the connections between changes in Earth’s orbit and the timing of the ice ages. He also joined Hays to co-found CLIMAP (Climate: Long range Investigation, Mapping, and Prediction), a National Science Foundation-funded project that used Lamont’s growing collection of deep-sea sediment cores to map the Earth’s climate some 18,000 years ago at the height of the last ice age.

Imbrie was born on July 4, 1925, the son of a Presbyterian minister, and grew up skiing in the Catskill Mountains near his hometown of Newburgh, N.Y. At the end of his sophomore year at Coe College, with World War II underway, he enlisted in the military and joined the ski patrols of the 10th Mountain Division.

After being wounded fighting in Italy, Imbrie returned home and used the GI Bill to study geology at Princeton University. He earned his Ph.D. from Yale University in 1951 and the following year was hired by Columbia.

Imbrie enjoyed math, and he incorporated it throughout his research. In a 1955 paper, he demonstrated a new technique he had developed for applying quantitative analysis to the study of fossils and what they can say about ecology in the past. Imbrie created other statistical techniques that he later used with CLIMAP to study changes in climate during the last ice age. “He developed what he called paloecological equations or transfer functions in which one determines the relationship between modern fossil assemblages and present day sea surface temperatures then uses those relationships to estimate past sea-surface temperatures at greater depth in cores,” Hays said.

In the mid-1960s, Imbrie grew interested in deep sea sediment cores, which Lamont ships were collecting every day under orders of Lamont Director Maurice “Doc” Ewing. That strict requirement – that all scientists at sea collect all kinds of data and share it with colleagues across campus – built a rare library of data at a time when most scientists collected only the data they needed and often kept it for themselves. Lamont scientists had access to global data, but Ewing’s new paradigm wasn’t accepted by everyone. 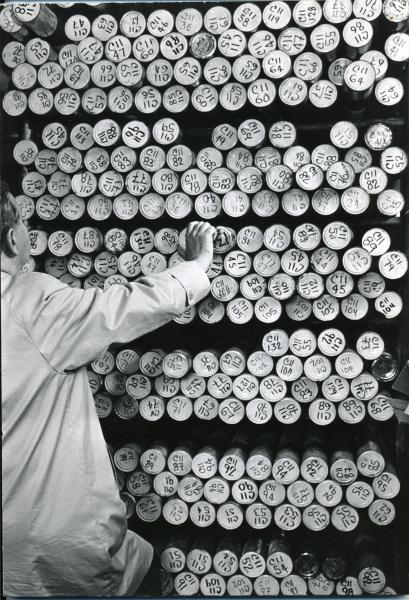 It was an exciting and contentious time, with major discoveries but also frequent arguments over data sharing, Hays said. Imbrie became head of the Department of Geological Sciences in this environment in 1966, and Hays recalls that Imbrie occasionally brought wine to meetings to try to build a more collegial environment. “He was easy to get along with, and he had a good sense of humor and abundant curiosity about a lot of things,” Hays said.

Oceanographer Bill Ryan, then a student at Columbia, recalled that Imbrie encouraged quantitative work. “He was extremely supportive when graduate students pushed the boundaries in their research inquiries, even when departing from the views of their faculty mentors,” Ryan said.

Imbrie was interested in shifting his focus to paleoceanography, and a meeting called by Lamont’s Wallace Broecker to discuss research techniques, and a later lecture by Alan Be on sediment cores, helped him make the leap. “Here were living organisms … and you could find them as fossils. And the fact that they were small, the sediments were often made of these things, you could get a continuous sampling of these populations of foraminifera down the deep sea cores. And I began to realize that this really was a major thing,” Imbrie recalled in a 1997 oral history interview with AIP.

Imbrie had a sabbatical coming up, and, with Ewing’s blessing, he spent that time working on sediment cores. In 1967, he left for Brown University, which offered “a quieter environment” without three campuses to worry about, as Imbrie put it. Imbrie continued his work with former colleagues, though, and with the Lamont core collection.

With Hays, he co-founded CLIMAP as part of the International Decade of Ocean Exploration, 1970-80. It brought together an international team of scientists who had been working in paleoceanography with foraminifera, radiolaria, oxygen isotopes, magnetic stratigraphy and other areas. Imbrie called it a “golden moment in science.”

Using sediment cores, Hays, Imbrie, and Schackleton also confirmed the Milankovitch cycles, the theory connecting the timing of the ice ages with the cycles of Earth’s orbit – changes in the elliptical shape of its orbit, Earth’s tilt on its axis, and its wobble. Their findings appeared in a famous 1976 paper, “Variations in the Earth’s Orbit: Pacemaker of the Ice Ages,” published in Science.

At Brown, Imbrie directed the international SPECMAP (SPECtral MAping Project) in the 1980s, which developed a chronology for oxygen isotope records. He was elected to the National Academy of Sciences in 1978 and won a MacArthur Fellowship in 1981 and the Vetlesen Prize in 1996.

After his retirement, Imbrie took up a new interest. Quartermaster logs from World War II were becoming available to researchers, and he mined them to write about the history of the 10th Mountain Division during World War II.

Imbrie is survived by his wife, Barbara; daughter Katherine Palmer Imbrie, with whom he wrote Ice Ages: Solving the Mystery; son John Z. Imbrie; and three grandchildren. A memorial service is planned for 1:30 p.m. May 22 at Brown University’s Manning Chapel.