To Kale for the First GPS Station 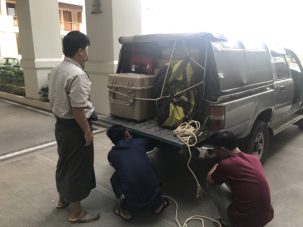 In the morning our Toyota Hilux truck picked us up and we went to DMH to load all the equipment. There are four of us: Keith, Zaw Min, a DMH staff member and Win Htut, our driver, and myself. The generator was too big, so it went separately by bus. Even so, we could barely fit the rest. We needed to have the rear of the truck gate down and bought lots of rope to tie everything down. As a result we got out later than we expected and only made it to Monywa after a 6-hour trip. We stayed in the same fancy 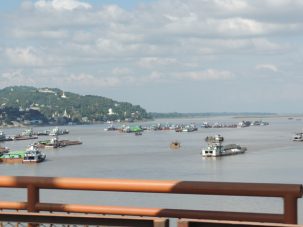 hotel I used a year ago on my first trip to Myanmar. For the rest of the trip the next day, there were two choices. The direct route, which has really bad roads, and the longer route, which has better roads. We took the longer route, going west and then north rather than the diagonal. We crossed the basin, then climbed over the mountains and into the Kabaw Valley, both created by the Kabaw Fault that we will be studying. It took 9 hours. We finally arrived at the Kale DMH offices at 4:30. We were warmly greeted and shown around, unloaded the truck, and were served coffee, tea and snacks. 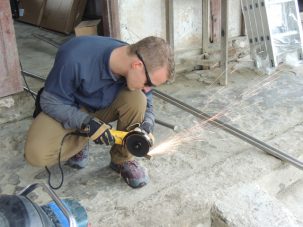 In Kale, or Kalay, our first proposed site at the airport wasn’t approved. That left a choice between a field at the DMH office that has some flooding after heavy rains, or a Buddhist monastery. Checking out the field, we decided it would be fine. Not more than half a foot of water due to poor drainage. We will lay some bricks under the waterproof equipment box to raise it, just to be safe.

Finally, on our sixth day in Myanmar, we got to start installing the first GPS station. In Bangladesh where I have 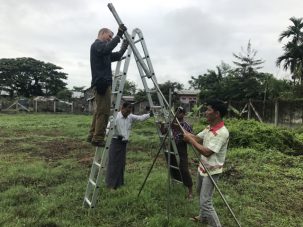 many sites, almost all our stations are placed on reinforced concrete buildings. We merely have to drill a hole in a column and cement in a threaded stainless steel rod for the monument. Here, there are few such buildings in the mostly rural areas of our sites. Instead, we will build our monuments out of 4 stainless steel rods pounded about 6 feet into the ground and welded together at the top to make triangular pyramid with a taller central column. This is my first time doing this, but it is old hat for Keith. 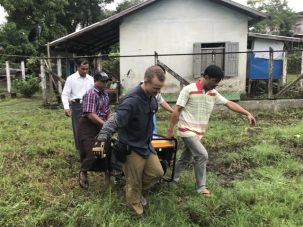 First Keith used a grinder to cut the tips of four rods to a point. Then we started the work on pounding them into the ground. Since it has been drizzling for a day, the ground is soft and they went in pretty easily. The homemade post pounder with a sledge hammer head welded inside a pipe work amazingly well. In a short time we had all four rods in the ground, the central vertical and three diagonals for bracing. Keith then cut off the tips at an angle while I went to buy more grinding discs. He then welded the tops together along with some 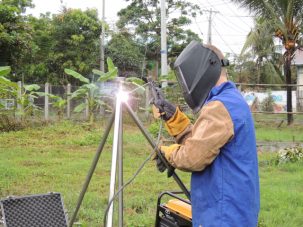 triangular wedges and added a threaded cap to the central rod. The monument was done before the end of the morning. Kale in is the middle of a valley filled with young sediments, so this will certainly be the easiest site for pounding rods.

The remainder of the installation was more familiar to me. We added a leveling mount to the monument, leveled it and added the antenna. We did the remainder of setting up the GPS box adding the antenna and cellular modem 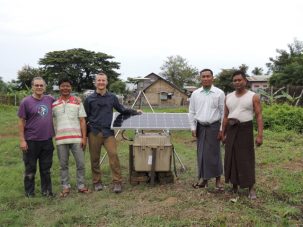 cables, wired in the batteries and grounding wires. We built the solar panel frame and used it to attach the panel to the top of the box at the correct angle. All of the junctions where wires and cables enter the box were made waterproof. Because the site floods, we elevated the box on a layer of brick, but it was pretty wobbly. We re-leveled the spot, and added a third layer of brick. It still seemed unready to face a monsoon. Our host provided a wooden beam that we cut into lengths and hammers around each side of the box. Now it was finally 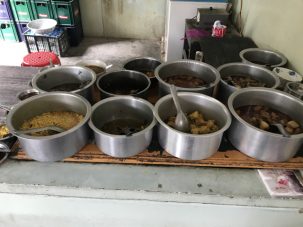 secure and ready. We made the final connections, tested the equipment and we were done before 3 pm. KALY is now up and running. It had taken less than a day and easily made up for the extra day of travel to the site.

Since the weather is still potentially drizzling for a few days, we will head east to Kalewa rather then up the windy mountain roads to Tedim in the west. We will commute the hour to Kalewa and stay here in Kale. We are in a new hotel that has not officially opened yet. It is quite nice except for the lack of hot water. So far in this short trip we have sampled food from Myanmar (Burmese, Chin and Shan ethnicities), Thailand, China and Nepal.